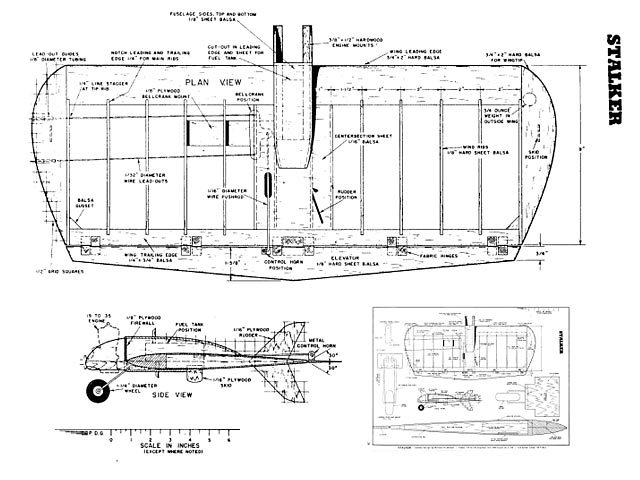 Quote: "Build this 100 mph flying wing and start on the road to becoming a worthy combat challenger this coming season. Stalker, by William H Manuel.

The idea for the 'Stalker' originated in the spring of 1953 at the finish of a combat league which had been running for three months. There were sixteen flyers who followed the league all the way through. We were members of a model plane club which kept us in close contact with each other and in turn solved many of our building and flying problems.

After the league flying was completed, we found that we had accomplished a greater sense of coordination and alertness in both offense and defense. We had also learned trick plays and attacks - some by accident and some by plan. However, with all these accomplishments the most important part was missing - the ideal combat plane for such an event. At this point we began work on the flying wing idea.

From the very start this seemed to be the right approach. We first built and modified most of the wing kits available at this time, but with little success. We then began work on completely original ideas.

Using the typical symmetrical airfoil, we experimented with thin sections, thick sections, squeezed sections and turbulated sections. We tried various cords and spans, CG locations, thrust line locations, and finally control surfaces. After many months of trial and error, we finally arrived at this hot combat ship which has won more awards for our flying group than any other plane to this day.

The Stalker is very light in construction yet will withstand more than its share of punishment. Should a mishap occur during competition, the plane is of such construction that it can be repaired and returned to flying shape with little effort, in time for the next round. It can be constructed for as little as two dollars sans the hardware. In test-flight we attained a top speed of 101 mph using a Fox 35 engine. Powered by various other engines, ranging in displacement from .19 through .35, with speeds dropping as low as 75 mph, the Stalker maintained its maneuverability. It proved to us that even loss of speed due to power failure would affect the performance very little.

But don't let the high rate of speed frighten you. We have found that if a plane can be maneuvered, then more speed means many more attacks with-in the first minute of flight. And believe you me, this is one plane that is no amateur in maneuverability. At even lower speeds than mentioned, the Stalker will turn 90° corners with practically no reduction in speed and little or no stalling tendency. This is due to the slim wing section and small amount of control surface used. For the experienced combateer, we suggest the use of a .29 or .35 engine for power. Make sure choice wood is used throughout construction because lightness and strength are the main factors in the performance..." 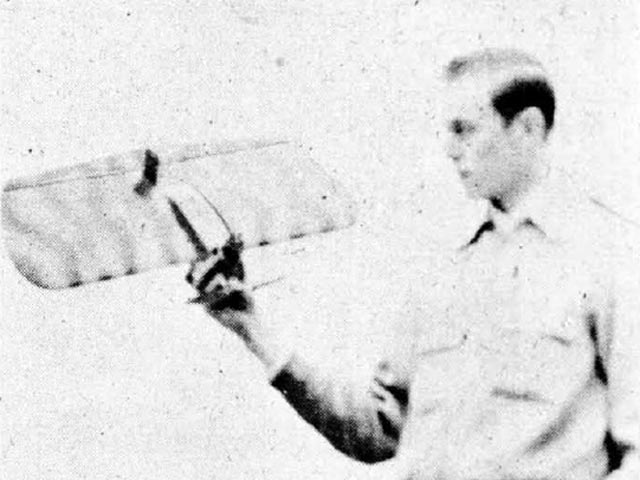