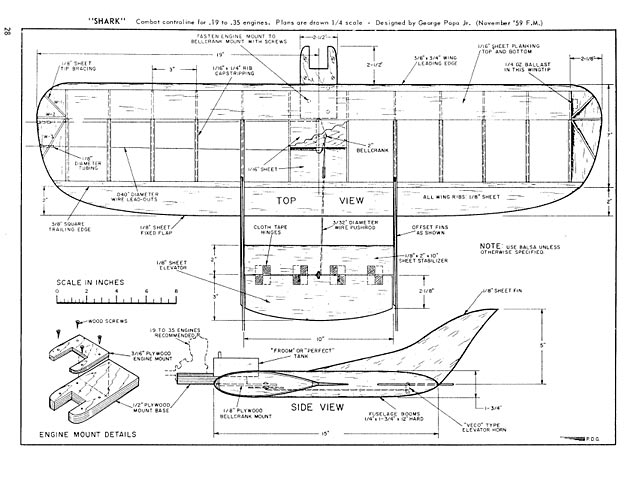 Quote: "The Shark is the sixth in a series of lightweight Combat models which we have built. It seems that most Combat flyers want a model that has the stability of a fuselage-type ship and also has the jump of a flying wing. One solution to this, we feel, is presented in this article.

The model shown here is light, weighing only 17 ounces, and is very fast with a good engine, such as a Johnson or Torpedo .35. It also embodies speed, stability and maneuverability.

We feel that the rounded lines will please those who are looking for something that is a little different from the popular kits which are now on the market. You'll find that the construction of a Shark is quite simple and will add to your pleasure of flight.

The wing is standard in size for this type of model. It's a moderate 325 square inches in area and uses an airfoil similar to those found in most Combat model plane kits. Since this is the major part of the airframe, we suggest that you begin construction at this point. You'll need 12 planks meas-uring 6-1/2 x 2 x 1/8 in balsa which are stacked together so that you can cut all of the ribs at one time. The two center ribs are slightly smaller allowing for the 1/16 planking which is applied in the center area.

Carve the leading edge from a piece of 1/4 in square hard balsa strip. Having done this, you should notch this lead-ing edge, and also the trailing edge, to a depth of 1/4 in to aid in aligning..." 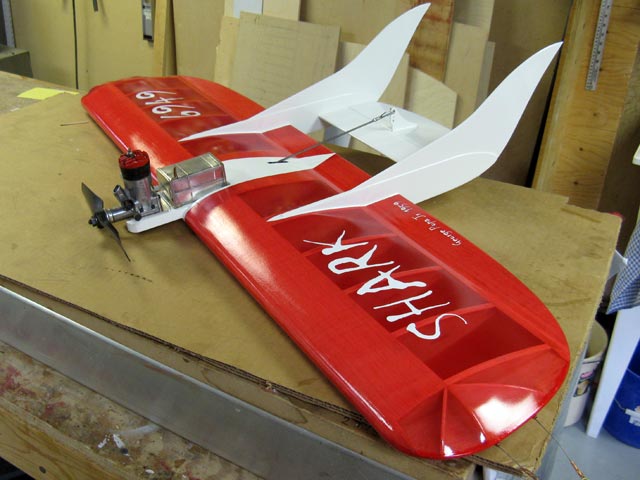