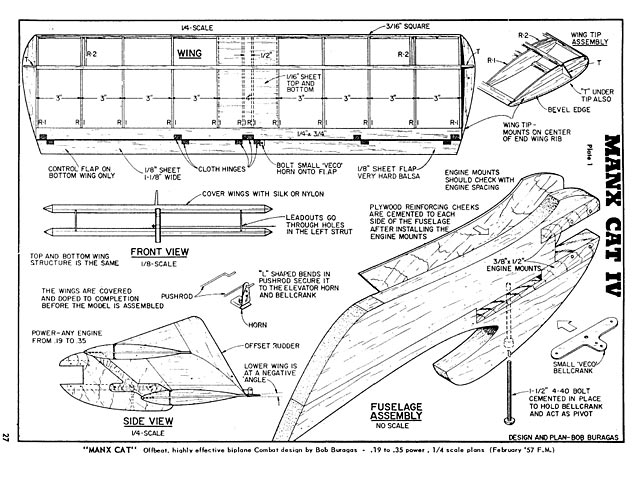 Quote "Interesting biplane design. The wings are scaled correctly so the diagrams are HUGE. I'm sure that if people are interested they can reduce the plan by a quarter if they want to save paper, drawing a series of squares to represent LE, spars, TE and ribs isn't really difficult."

Quote: "A tail-less terror for Combat flying fans that'll turn on a dime and give 9c change. Manx Cat IV, by Bob Buragas.

Seldom does a designer get a different idea that works out as a 'natural," and here is a "natural" if there ever was one. We were bugged by the idea from the start, taking just four days to go from rough draft to finished proto-type.

Manx Cat I was a super simple model that featured square wing tips and a super-thick airfoil. This 'foil was chosen to produce good lift and strength. A profile fuselage was employed and it was further simplified by cutting it from a piece of 3/8 plywood sheet to eliminate construction.

About the time we finished the first 'Cat' we had a very pessimistic audience on our heels waiting for the fatal test flight. To confess, we almost agreed that this first attempt would be a failure because of the many variables in design that could affect success.

A Fox .25 was used to power the ship and it looked formidably large on the fuselage. Calls of 'Rat Racer' could be heard from the sidelines. Not being able to stall longer we finally started the engine and flew the ship. Balance, trim, control surface area, you name it, all worked out to a T. It's true the ship was fast. The 5 by 20 inch wings totaled slightly over 200 square inches of area including the flap control. However, the thick airfoil was obviously slowing the ship while making maneuvering tight and smooth. Unlike most wings, this ship grooves itself. It holds a control position until you signal 'go', then go it does! Ever see a really square corner? This ship can do it.

But though we hit the design 'on the head,' we still didn't have what we wanted. The ship wasn't as clean looking as we wanted it to be.

Cat II had us going wild. We cleaned up the wing by thinning the foil. On top of this we added 4" to the span, and wing tips to clean up the lines. We even got a little extravagant by tapering the tip ribs to make them thinner. The extra span increased the flap area which upped the flying area to about 270 square inches. Having only a Fox .19 available for installa-tion we put it in with the idea of be-ing slow and safe.

Cat II seemed faster even though it was larger and powered by a smaller engine. It had one flaw, the control was too touchy..." 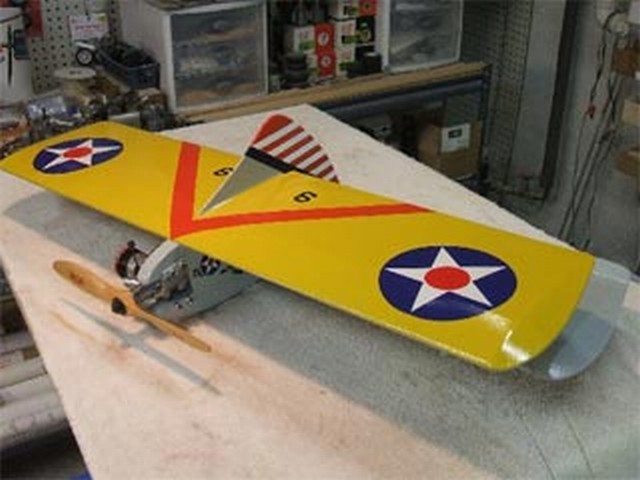