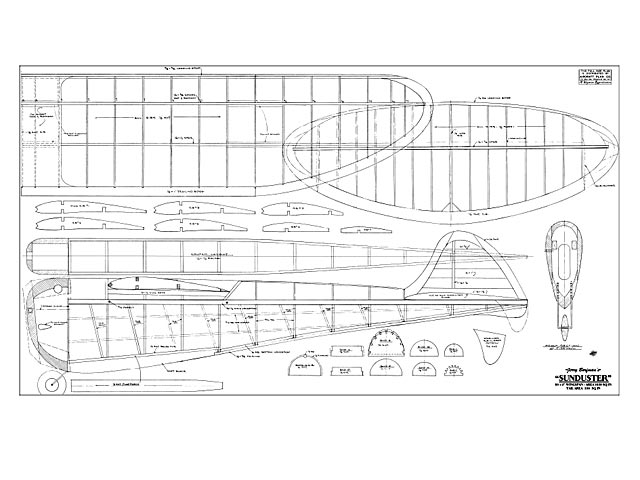 FOR the last two years in the gas model world, there has been an ever increasing demand for high performance. The Sun-duster appears in response to this demand. This ship has been designed with extra large wing area for its size of motor dis-placement in order to promote excellent soaring qualities, which is essential for a contest ship. The other requirement is the climb. To achieve these qualities the ship was designed to incorporate the following features:

1. A long nose moment to help it hold its course.
2. A thin airfoil to give it speed on the climb and less drag.
3. A completely cowled and inverted motor in a streamlined, light efficient fuselage to reduce drag and give it a fast climb.
4. Large elevator surfaces to prevent stalling and induce stability.
5. Light, strong and easy to build structure.

The Sunduster was taken to the model flying field at Creedmore, LI for testing. It was found to have one of the most sensational glides ever seen in a gas model. Its first power flight was with the motor running very slowly; at the end of ten seconds the motor cut, and she pulled out into a smooth graceful glide which lasted one minute and forty seconds.

It was noticed during the flight that up-thrust was needed in the motor. The ship was retrieved, the cowl removed, and two small washers were inserted under the two rear bolts to give it the required upthrust. Two more flights were then made with the motor advanced two notches. The times of the two flights were 3:21 and 3:56 respectively. each on a ten second motor run. All of these preliminary flights were made with a low pitched, thin bladed 14 in prop.

A higher pitched wide bladed 14 in prop was added, and the motor was revved one notch more, which was only half speed. This flight was sensational! She climbed like a bullet, and after seven seconds the motor cut, and she started on a glide that lasted five minutes and twenty seconds.

On the next flight the motor was opened still higher, and she was let loose. She pointed her nose skyward and spiraled up. When the motor cut she leveled off into a slow, flat turning glide to the right. We followed the ship for about twenty minutes as she lazily drifted across the afternoon sky. The total time of the flight was 27:25 on a ten second motor run! This flight proved the ship to be definitely the superior contest plane that every modeler is looking for. Here it is, the Sunduster - so see what you can do with it.

Building and Flying. First, you must scale the plans to working size. Follow the scale on the plans; then carefully study all the plans.

To build the body, first build the. crutch out of 1/2 x 1/4 in hard firm balsa. Then cut out all the top formers and glue in place onto the crutch. Cut out the firewall from 1/8 in plywood, and cement onto the crutch..."

Quote: "Found Sunduster lurking on my hard drive in fairly low res... I know several people were looking for this plan." 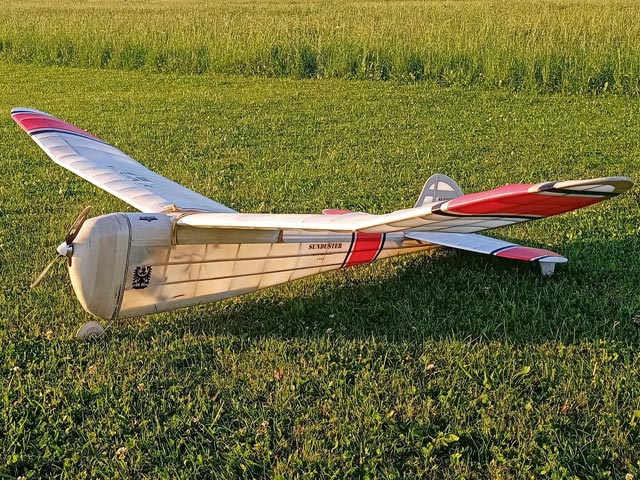 My Sunduster built from the Czechaero kit 2021 [main pic, 003]. Adapted for electric motor drive. Ready for SAM competitions of the ALOT category. Have a nice day. From the Czech Republic,
Miroslav Castka - 16/07/2021
Add a comment