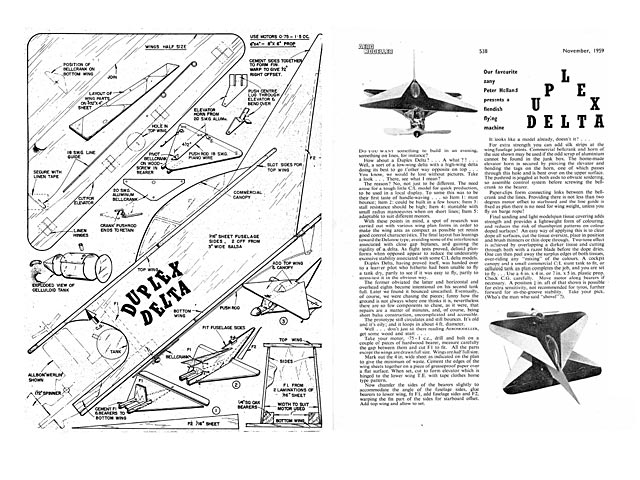 Quote: "Do you want something to build in an evening, something on lines, for instance? How about a Duplex Delta? A what? Well, a sort of a low-wing delta with a high-wing delta doing its best to go t'other way opposite on top. You know, we would be lost without pictures. Take a look. There, see what I mean?

The reason? No, not just to be different. The need arose for a tough little C/L model for quick production, to be used in a local display. To some this was to be their first taste of handle-waving, so Item 1: must bounce; Item 2: could be built in a few hours; Item 3: stall resistance should be high; Item 4: stuntable with small radius manoeuvres when on short lines; Item 5: adaptable to suit different motors.

With these points in mind, a spot of research was carried out with various wing plan forms in order to make the wing area as compact as possible yet retain good control characteristics. The final layout has leanings toward the Delanne type; avoiding some of the interference associated with close gap biplanes, and gaining the rigidity of a delta. As flight tests proved, deltoid plan-forms when opposed appear to reduce the undesirably excessive stability associated with some C/L delta models.

Duplex Delta, having proved itself, was handed over to a learrer pilot who hitherto had been unable to fly a tank dry, partly to see if it was easy to fly, partly to stress-test it in the obvious way.

The former obviated the latter and horizontal and overhead eights became intentional on his second tank full. Later we found it bounced unscathed. Eventually, of course, we were chasing the pieces; funny how the ground is not always where one thinks it is, nevertheless there are so few components to chase, as it were, that repairs are a matter of minutes, and, of course, being sheet balsa construction, uncomplicated and accessible.

The prototype still circulates and still bounces. It's old and it's oily; and it loops in about 4 ft diameter. Well, don't just sit there reading, get some wood and start..."

Quote "IIRC it's one of Peter Holland's zanier ones that I made :) I recall that its double delta wings (or perhaps it was due to the wire leadout guide) created a slightly wobbly flight but was otherwise fun." 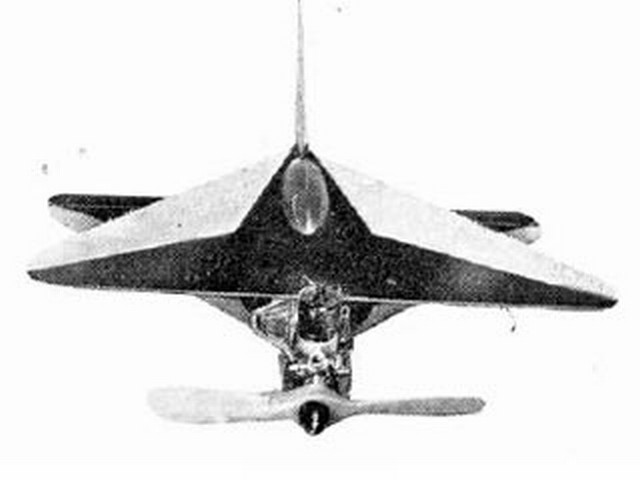 I built the original Duplex Delta and flew it until it was worn out. I replaced it with a redesign of my own [see more pics] to make it look a bit more 'sexy'. I think it looked quite smart. In those days I was riding a Vespa scooter and used to take it flying - complete with lines and diesel fuel - in the helmet box. Best Regards
ChrisP - 02/05/2013
Engine position and delta sweep angles in photo are very different from plan. Plan gives extreme tail heaviness and outward bank angle circa. 15deg. due to v.low b/crank. I built it from plan and found it almost unflyable.
RFD - 03/07/2014
Hi guys, Here is my Duplex Delta with a GP-07 [see morepics 007]. Looking forward to tangling the lines on this one! Thanks Outerzone!!
TommyR - 30/08/2016
Add a comment