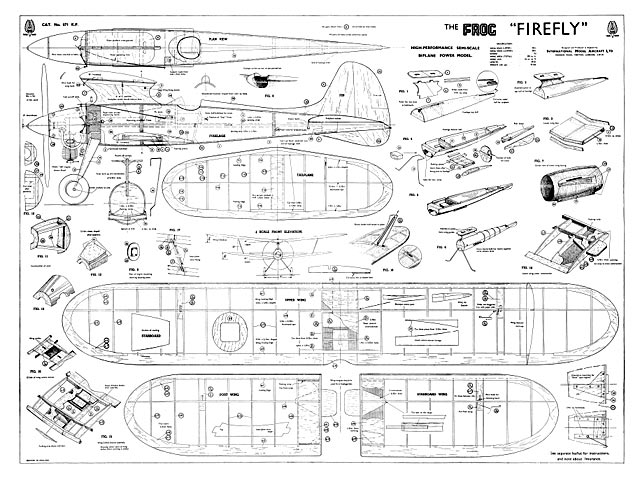 Quote: "The fuselage was two moulded half-shells, with brown paper on the inside of the balsa. Would have to decide between moulding over a former, or plotting some bulkheads and planking. It lends itself to a colour scheme from the US navy of the 1930s. I haven't decided on the mods to cope with the lack of kit parts yet."

On Packaging: of this kit we would refer to the Powavan review ; the same remarks apply equally to both kits.

Quality of Contents: Just as complete as the Powavan, right down to the elastic bands and tissue paste, the Firefly kit contains an additional quality feature in its special plastic-coated moulded balsa fuselage. This light shell makes an almost indestructible fuselage and requires but little work in its assembly. The quality of all the woods, including the thoughtful supply of hardwood mainspars, is excellent.

Completeness: Firefly is an absolutely self-sufficient kit, with enough cement, plenty of scrap left over for trim-ming, adjustments, and even the special spinner and adaptor screw to fit it to the Frog engine.

Ease of Assembly: The review kit was assembled by a relative novice in power flying, and, we might mention, she was of the fair sex. Without assistance, and with but little previous experience of aeromodelling, our selected tester completed the model in approximately two weeks spare time and reflected on the ease with which each part accurately fitted into place. It would be very difficult for even the most raw of beginners to go wrong in making the Firefly.

Instructions: Can be credited as a great aid to the pleasure of making this Model ; little is left to the imagination, and perspective views of the more difficult parts are shown with clarity on the plan.

Value: is absolutely 100 per cent.

Flying: The test model has been flown over fifty times, has been subjected to all forms of trim, and has on many occasions spun in under power, or on the glide. The only damage has been to the foremost part of the upper wing platform, and to the tissue around the strut fittings. On all of these unfortunate occasions, the model was trimmed to fly to the right and at least two spins were due to movement of the lower wings (which can twist the strut out of line and thus form an outboard rudder). On each crash, the model literally flew to pieces, and even after a 40 mph spiral dive from well over 100 ft, it was just a case of gathering all the components, adding new rubber bands, filling up and flying again within five minutes.

After securing the lower wings with a transverse rubber band and arranging the very sensitive rudder for a slight left hand turn under power and tighter left turn on the glide, plus the addition of lead ballast on the nose and 1/8 in packing under the tailplane leading edge, we have enjoyed many hours of safe and impressive flying with the Firefly. It is a fast flying job and takes off after a most realistic run of 20 ft into a climb of about 30° at 35 to 40 mph." 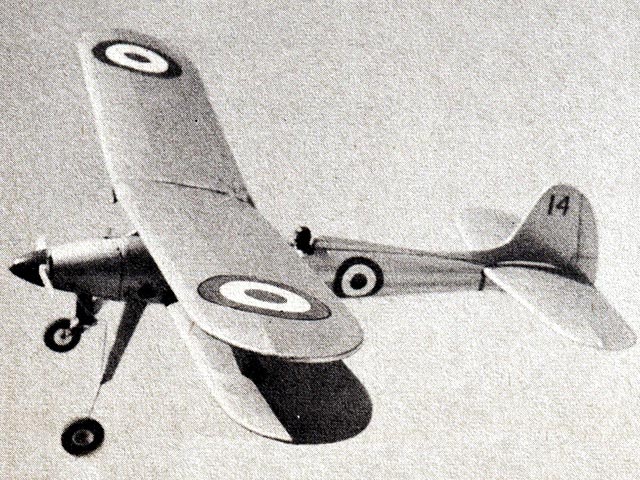 If you plan to keep the gallery going here is a photo of a Frog Firefly built from your drawings [more pics 003]. Keep up the good work, I really appreciate your efforts.
BobP - 25/04/2016
Nice work - I always thought I'd like to build this myself, but was never sure how to make the fuselage.
SteveWMD - 25/04/2016
Fuselage is similar to Frog 'Fox' in that it was originally 2 half shells. I got round this by making octagonal formers, and using 3/16th softish balsa to make the vertical sides, and the top and bottom. This was then sanded flush with the formers before adding the diagonals of 1/8th balsa. It was then 'just' a sanding job to get everything nice and round. I covered mine in tissue. It looks like a baseball bat, is just as strong but a whole lot lighter. It was great fun and I haven't broken it yet. Hope this helps.
Chas - 13/06/2016
Managed to pick one of these kits up yesterday, seems complete with assembly plan?
Bernie - 27/08/2019
Got this model for Christmas in the 50’s and I remember being impressed by the fuselage halves! Years later I asked my Dad where he got it and to my surprise he said Macy’s (Herald Square). Back then most Department stores had a full line hobby supply department. He also mentioned that it was a British kit.
Great job on the model, the fuselage is beautiful.
Jim
Jim McGlinchey - 28/01/2021
Add a comment