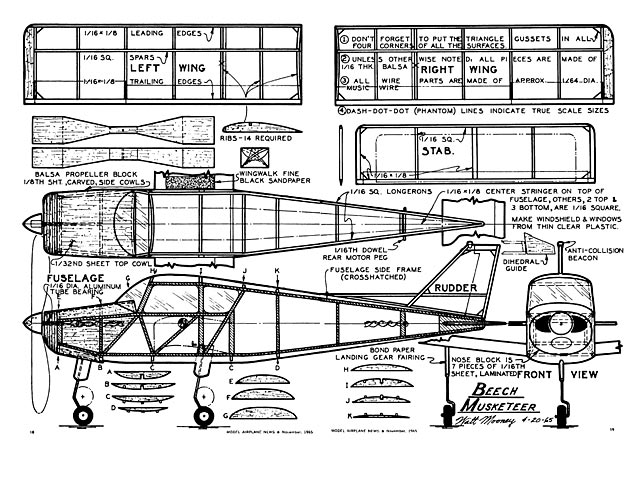 Quote: "The Musketeer is Beech's attempt to provide a simple, relatively low cost four-place aircraft. The Beech people have simplified the lines and structure of the aircraft as compared to the Bonanza and utilized a fixed landing gear and an all-moving horizontal tail. The leading and trailing edges of the wings and horizon-tal tail are parallel; and the sides of the body are very nearly flat. Nonetheless, the Musketeer is a very attractive aircraft and is a suitable subject for a small rubber-powered scale model with a minimum number of scale deviations.

To fulfill the model requirements, our Musketeer has lengthened landing gear to provide clearance for a larger than scale diameter propeller, a larger than scale horizontal tail and has increased dihedfal. For those who would prefer a model closer to scale, the scale gear and tail is indicated on the plans.

One difficulty in portraying modern aircraft in small rubber scale models is in simulation of the metal surfaces. The Musketeer is no exception, as you can see by the photographs it still makes up into a very attractive model.

The model is constructed in the standard manner for small scale rubber jobs. The fuselage is made up of two side frames separated by cross pieces sur-mounted by formers top and bottom, into which are notched stringers. The wings are composed of leading and trail-ing edges, ribs, top spars notched into the ribs and carved tips. All the wood in the model is balsa..." 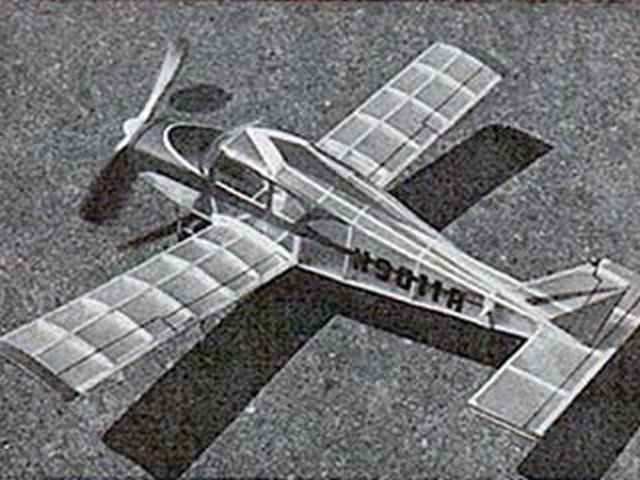 Oh my gosh, I remember building one of these straight from the magazine plans when I was 12. It was a lovely little thing. As I recall, it didn?t fly all that well, but I would know now to build it more carefully, with a lighter touch when gluing the balsa, and attaching the tissue paper covering. I?m really pleased that you found this.
George - 23/02/2015
I really enjoyed built this plane! [more pics 003-006]
EldonMasini - 17/07/2017
Add a comment