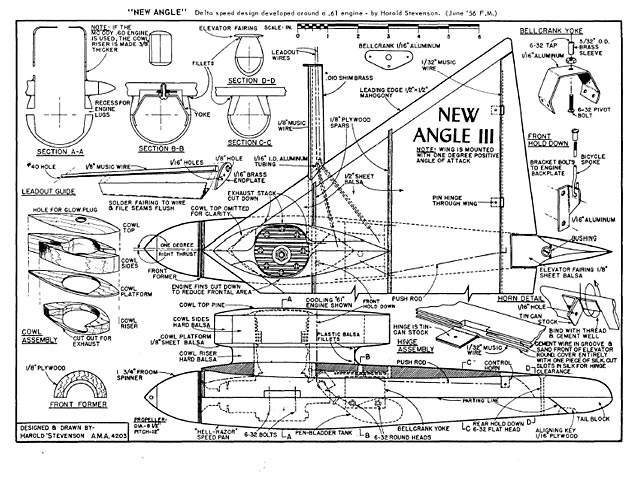 Quote: "Here we go again! All you lovers of the weird and wonderful, gather round. This is a Class C-D speed ship that will even satisfy a man from Mars. The surprising thing though, for all its unorthodox appearance, it will hold its own in any contest, and then some.

The New Angle III is a development of the New Angle I, which appeared in the April '53 issue of FM. That first ship was primarily a speed trainer, of all wood construction, powered by a McCoy 19. From the performance and data gathered from the first New Angle, a number two model was constructed. It was a .60 job, almost identical to the "A" ship, but a bit too large for really high speeds. It, too, was all wood.

The New Angle III uses the good features of the other two ships in design, and incorporates improved construction plus a metal speed pan. It's about the smallest C-D ship you will find anywhere, and that means light weight with less drag. The delta wing allows relatively large wing area (110.3 sq in) giving a low wing loading for smooth easy landings. The best speed to date, with two control lines, is 153.77! The installation of a one line control system would undoubtedly put the ship over the 160-mph mark.

There is one feature of the New Angle III, that may not be familiar to every-one. This is the use of the bellcrank 'yoke.' With this system, the bellcrank is held in position in the top half by the leadout wires and the pushrod. But, on assembly of the top and bottom halves, the bellcrank pivot bolt passes through the bellcrank, thus transmitting the en-tire weight of the engine and speed pan directly to the control wires. There is no heavy load on the top half.

Let's stop talking now and start building. The original model uses a Dooling 61. Because of the scarcity of this engine, you will probably use the new McCoy 60 which should jump the speed somewhat. First, the speed pan should be worked down. We used a 'Hell Razor' C-D magnesium pan which may be obtained from your local hobby shop. Start by mounting your engine carefully, with 1° right thrust. Drill and tap the pan for 6-32 hold-down bolts. Now, cut the end of the speed pan following the length and angle shown on plans..." 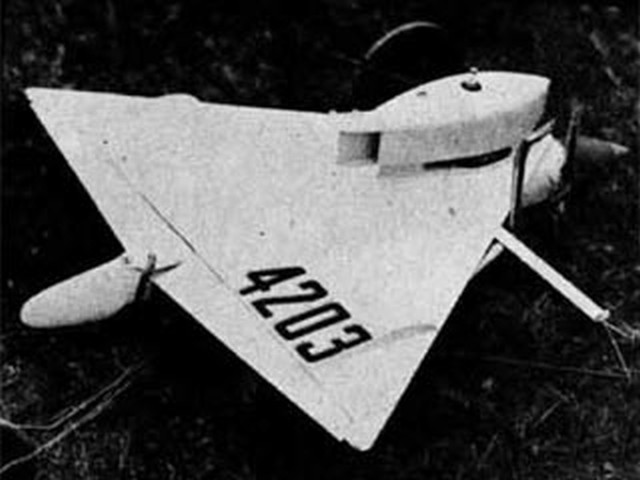