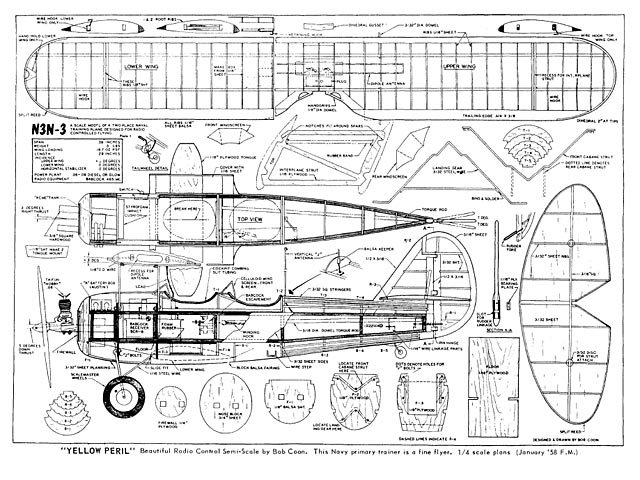 Quote: "Vo-Vs (very old, very slow) Navy pilots can date themselves by muttering: They don't make them like the old N3N anymore. Both float and land based, these ships provided primary training for thousands of student pilots during World War II at Pensacola and Jacksonville, Florida, and Corpus Christi, Texas. Still in use today by crop dusting pilots, she is still proving her worth because of her load carrying capacity and rugged construction. She was temperamental on the ground. Ground loops were frequent, but once in the air, she handled beautifully. Aptly named the 'Yellow Peril' by those who knew her best, she sported a bright yellow paint scheme that distinguished the training plane of the Navy.

Built by the Naval Aircraft Factory at Philadelphia, the N3N-3 was the last version of the series. Beginning in 1936 200 N2N-l's were built followed by 200 N3N-2's and 649 N3N-3's. Powered by a 225 horsepowered Wright Whirlwind, she boasted a top speed of 120 miles per hour and cruised at 80 miles per hour. No restrictions were ever posted on this aircraft, and more than one fledging pilot has come through a bad maneuver smelling like a rose. The last active squadron (30 Planes) are float mounted for operations in the Severn river, Maryland, where the N3N is used to indoctrinate midshipmen from the US Naval Academy. We'll bet our silk scarves that the Yellow Peril will whet your appetite, so hold the stick while we wipe our goggles and we'll get started on the model R/C version.

Our model features knock-off upper and lower wing panels and N struts. The N struts slip into slots and are held in place by a single rubber band which also simulates part of the strut structure. The lower wing panels have a box constructed at the wing root which slips over a plywood tongue and is held in place with a single rubber band on the bottom of the panel. Two wire hooks accomplish this. The top wing can be held on with four pieces of plastic fuel line tubing. This heightens the scale effect as they are almost invisible. This model is strictly scale, utilizing the same number of wing ribs as the original. The only changes being an increase in stabilizer area and wing dihedral.

Construction of the fuselage is quite simple, however, if the correct sequence is not followed, you may find yourself in a tangle. Bend two Cabane struts (front and rear) and the landing gear from wire to the shape shown on the pattern drawing. Cut out fuselage sides, plywood floor, and bulkheads using templates provided. Using J bolts as fasteners, assemble the front cabane..." 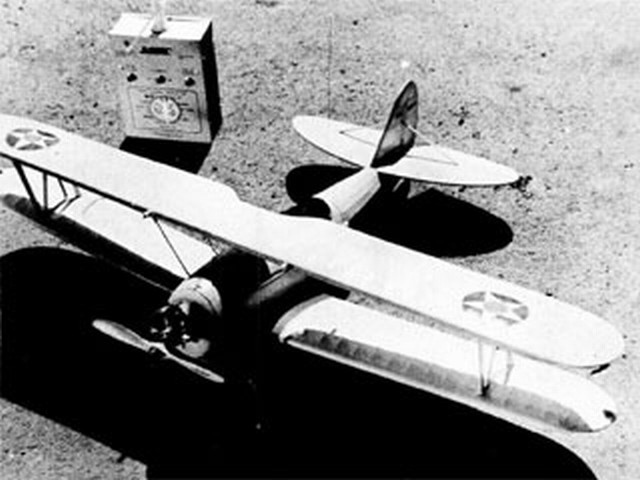