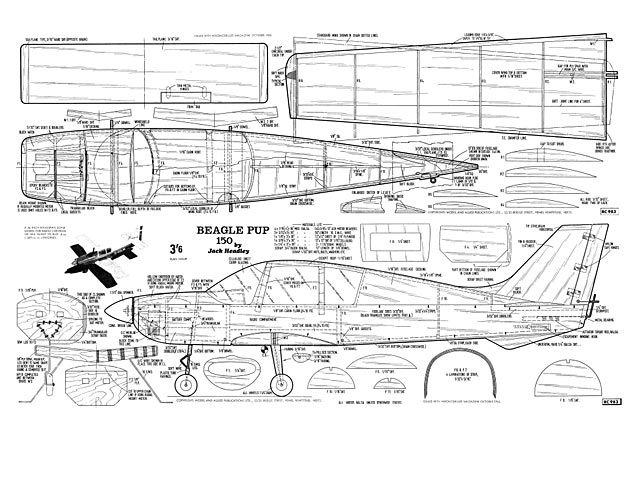 Beagle Pup 150. Scale model for either FF or RC.

OUR FIRST impression of the Beagle Pup was that surely it had been designed by an aeromodeller, as it was such a perfect subject for a scale model. Imagine a plane with lots of dihedral, an adequate tail-plane, and an ideal undercarriage, plus a roomy fuselage for all the radio equipment. From what we have read about the design it seems that Beagle decided to save extra fuselage weight and costs by providing an enlarged tail assembly. Whether or not, this is true is immaterial, but we wish more designers would take this approach!

Three Pup designs have so far been disclosed, the 100 and 150 are almost identical, and the 180, which has a little more wing area (the numbers, incidentally, refer to the engine horsepower).

Our model is of the Pup 150 which is a four seat version of the basic 100 design. The construction follows the general lines of two previous models, the 'Swannee' from Feb 1966 Aeromodeller, and the 'Moonbeam' from RCME. This 'all balsa' construction system is ideal for small rudder only types, and is very robust, and not at all as heavy as would at first appear. Our 'Moonbeam' together with a friend fly regularly from the local slope, and both have survived landings into the too numerous cactus bushes, with far less damage than that suffered by the retriever. Those cacti hurt! However, to the construction. Rather than give a tediously detailed account of glue A to B before C but after frame 6, we've indicated the main steps. The intermediate work should be obvious after a careful study of the plan.

The fuselage is initially built upside down on the plan, by first gluing the sides to the cabin floor, and frames 4 and 6. When dry, add the remaining frames, and the top and bottom sheeting. Note that frames F6 and F7 are constructed from strips of 1/32 in. sheet which are first soaked in hot water, glued together, then wrapped around card formers. Add the tailplane and fin, and the nose and tail blocks and carve to shape. The wing is built in two pieces. Start by fixing the leading edge and ribs to the lower surface. The wings are then joined by the main spar - undercarriage attachment. Make sure the U/C spar fits snugly between the two main spars. Add the upper sheet, and block tips and sand to the final shape.

Now finish off the wing cut-outs in the fuselage, using the completed wing as a guide.

No particular radio installation has been shown on the plan. The original was fitted with an escapement, as our picture shows. The amount of rudder travel should not be too great initially, and the system sketched will permit the right amount to be obtained during the first few flights.

Use the batteries to obtain the correct balance, rather than moving the radio around, When the CG is located correctly fix the battery location by an additional bulk-head.

The complete model was first clear doped, and then covered with Jap tissue. Apply a further coat of clear dope, then spray on the colour. Two or three coats provided a very satisfactory finish. The original was red and white as the photos show.

Establish the correct setting of the elevator tab by first obtaining a smooth glide. Set the rudder for about in. movement, and make a few flights, revising the engine alignment as required. Some sidethrust will probably be necessary. The original model weighed just under 16 oz all up when completed." 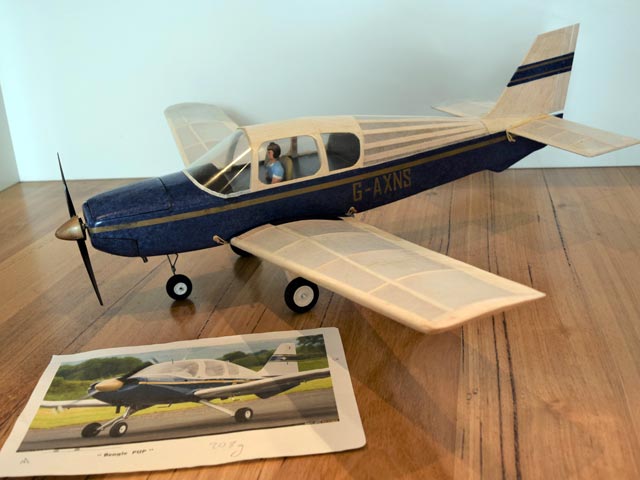 Note to self. This would make a SA Bulldog model, with just minor canopy change and a RAF trainer paint scheme.
SteveWMD - 08/11/2012
Add a comment