Quote: "Unless you are familiar with the story of the little Chilton DW1A built in England in 1939, you may think of vintage ultra-light aircraft as being slow, unrefined and possibly even crude or clumsy. But in 1937 two ex-DH Technical School students, A Dalrymple and AR Ward, set out to design a 'real aeroplane in miniature.' Their efforts produced a trio of low wing monoplanes, powered by converted 32-hp English Ford 10 engines, that were not only cheap to produce, but were fully aerobatic and clean enough aerodynamically to require three-piece split landing flaps.

A newly developed 44-hp engine of French manufacture was installed in a fourth version built in 1939. Reductions in airframe weight and the greater power of the new engine enabled this latest craft, the Chilton DW1A, to attain remarkable speeds with even more remarkable economies of operation. Speed records in excess of 125-mph set by the DW1A in the pre-war air races of 1939 still stand even though a quarter century has since passed.

Original intentions of manufacturing the Chilton DW1A to sell for 375 pounds were interrupted by World War Two. The little air cooled Train 4T engine that. contributed so much to the success of the DW1A was not available after the war so production of these remarkable monoplanes was never resumed. Two of the four original Chilton survive. One, much modified with a bubble canopy and a new 62-hp engine has hit 144-mph. Not bad for a twenty-five-year-old ultra-light!

Our model has been built to a scale of 1-3/4 inches equals 1 foot. This gives a 42-3/4 in wingspan and 34-1/4 in fuselage. The model weighs 53 ounces when powered by a Roberts-operated, throttled, inverted K&B 35RC engine. The Roberts bellcrank also operates the 3-piece split landing flaps; an optional fuel shut-off system is tripped when full-down elevator is applied.

The real airplane's configuration is ideal for control-line flying since its wheel position allows beautiful landings and taxi runs The cowling completely encloses the engine. Scale cooling air inlets and outward flaring sides and bottom provide cooling air passages with a minimum of non-scale openings to be cut in the cowling. Wheel pants hide the non-scale wire undercarriage struts very nicely. Wood and fabric exterior covered areas as well as the plywood and spruce strip interior construction details are true-to-scale. These features and the contrasting black-with-white trim make a very striking flying scale that has collected many trophies and best finish plaques for the author and for Larry Coleman who also built a Chilton from our plans.

Contest-minded fans can find the necessary qualifying 3-view in the August 1954 issue of Aeromodeller magazine. Our instrument panel copies a photo on page 116 of the 1954/55 Aeromodeller Annual..." 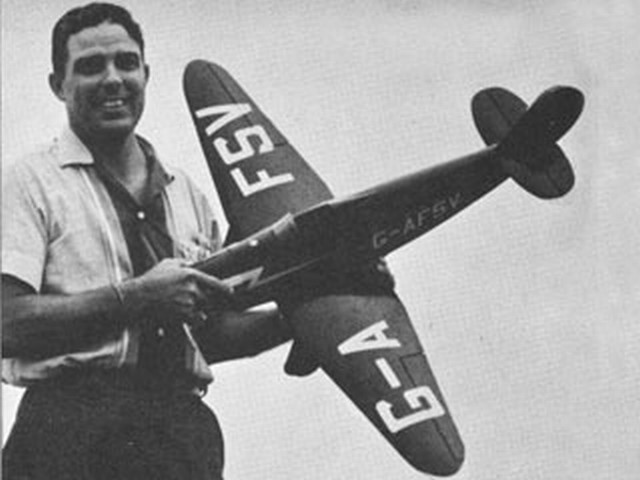