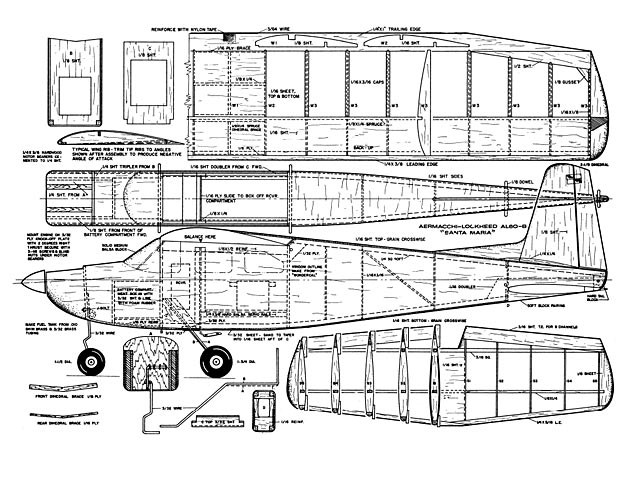 Aermacchi-Lockheed Santa Maria. Scale model for single channel RC by Jess Krieser, from Model Airplane News Dec 1965 issue. Thanks to JMP for clarification on this one.

Quote: "It was a case of love at first sight. The very first time I saw a colored photo of the Aermacchi-Lockheed Santa Maria in a foreign aviation journal, I wanted to build a model of it. I don't know whether it was the naturally graceful lines of the ship, or its unique ivory, orange, and blue color scheme that intrigued me, but intrigued I was, and I knew that sooner or later I would have a model of it in the air.

As it turned out. it was later, for this project suffered innumerable interruptions before it reached fruition. At the time of my first acquaintance with the ship, I was developing my semi-scale 1/2A Cessna Skylane (oz6262) as published in MAN, July '64, with a few other projects in various stages of design and construction. For nearly two years, all work on the Aermacchi consisted of merely looking longingly at photos of it, thinking what a great model it would make. However, the delay in starting the project had its advantages, for it gave me some time to accumulate background information on the ship. In this, I received substantial help from Mr AW Mooney of Lockheed-Georgia, and Messrs HH Britten and Patrick L DeYoung, both of Lockheed Aircraft International.

By the time I had the decks finally cleared for action and was ready to develop something, I had already mentally designed a rrumber of versions of it, ranging from a simple, single-channel ship to a complex, exact-scale version complete with flaps, and utilizing full-house proportional. However, didn't let some of my wilder dreams on the ship's design influence my actual course of action, and chose a simple version. Perhaps I was influenced in this direction by my good luck with the Skylane. for the more I studied the Acrmacchi, the more I began to notice similarities to the Skylane.

Both had wings of constant chord throughout most of their span, with tip panels tapering from both leading and trailing edges. Both had tapered stabilizers, although the angle of taper was different. Both had their wings in about the same relationship to the stabilizer and to the thrush line. And finally, both had basic dimensions that were quite close to each other, and both had tricycle landing gears.

Since I knew how the Skylane performed, I thought why not simply alter its lines to still have the Skylark's performance characteristics. This became my approach, and I simply placed a piece of drafting vellum over the Skylane drawings, and changed the tines to get a visual resemblance to the Santa Maria. The wing was not changed at all, and I used the complete Skylane wing, with the simple addition of a cabin fairing at the center section. I changed the taper of the stabilizer slightly, but kept its span and area similar. Most changes were in the fuselage, for the entire profile had to be changed, and the nose lengthened slightly to gain the proper visual balance. I also widened the fuselage slightly, to provide a little more room for getting at equipment.

The final iouch was added by finishing the ship in colored dope, following the color scheme of the prototype. The result was a good looking, realistic appearing airplane, and the approach to its design proved to be very sound, for the ship flew off the board, with no trim changes at all. It flies just like the Skylane! With this kind of luck, I might just decide to turn out a whole string of semi-scab air-planes, following the Skylane configuration.

For some months I have been correspending with Bill Anderson in California, who started to write me as a result of having built the Skylane. I sent him a set of plans for the Aermacchi, before I started to build mine. Bill built one too, and has had exceptionally good luck with it. He used a Royal Products single-channel servo, with a Controlaire Mule and SH-100 superhet receiver. He reports that his flies just like the Skylane, and is a very stable, yet acrobatic airplane. His flew off the board, and he put in six flights in a row, with no trim changes or adjustments. He ran into only one problem, which was weight - his came out a bit heavy at over thirty ounces, and the Golden Bee he is using is not quite enough power. This can be cured quite readily by other builders who wind up on the heavy side by simply using the Cox RR-I. which I find to be vastly superior to the Golden Bee in power output.

While I also used colored dope to finish mine, it came out to 28 ounces, complete with receiver and proportional actuator. I used the new Min-X Pulsmite 1200S transmitter and receiver, with an Adams actuator. The Min-X system has proved to be very reliable in all phases of operation, and it sure is fun to steer with a stick. instead of pushing buttons, and remembering to pulse twice for left turns.

Enough. now of the armchair flight reports; let's get to work building!

Wing. Select medium soft stock for the leading and trailing edges. Use pre-shaped trailing edge stock if you wish, and save a lot of work in carving. Notch trailing edge for ribs and pin it to building board. Then shape a piece of 1/2 in soft sheet stock to the wedge shapes shown to help form tapered trailing edge, and glue it to trail-ing edge. Next, pin leading edge in place..."

Article pages, text and pics, thanks to JMP. 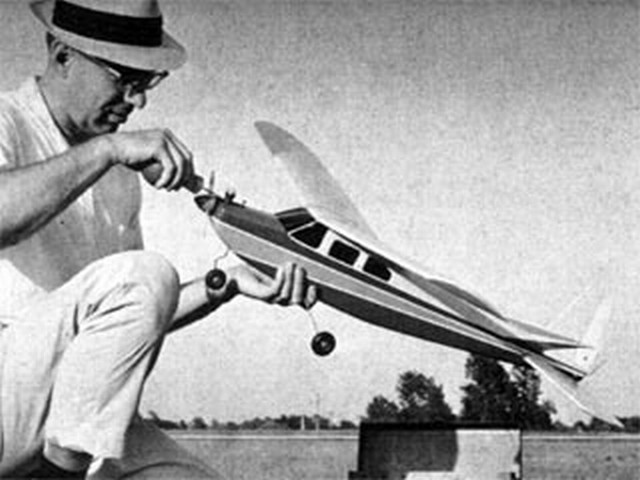