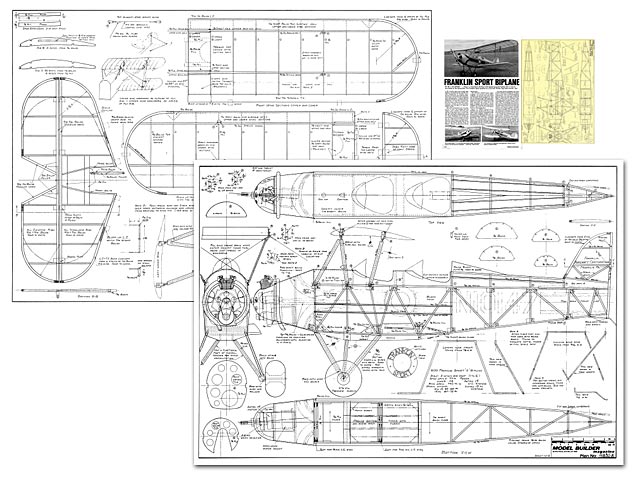 Quote: "The Franklin Sport was a small sport biplane manufactured by Franklin Aircraft Corporation of Franklin, Pennsylvania during the years 1930 and 1931. Seventeen of the Franklin airplanes were manufactured. I suspect that the depression of that era prevented a larger production. At least this certainly was the case with a number of other manufacturers. Twelve of the seventeen airplanes were the Sport 'A' type, our subject model.

Full-scale construction was very typical for its time. The fuselage and tail feathers were welded 1025 SAE steel tubing. Wing construction was built-up ribs and solid Sitka spruce spars. The 22 x 10 x 4 Goodyear airwheels provided the shock absorbing. The aircraft was powered by a Velie M-5 engine of 55/70 hp. As l understand the history of that time the Velie engine assembly operation was closely associated with, if not part of, the Mono Aircraft Corp of Moline, Illinois, manufacturers of the monocoupe.

Sport 'A' N10147 started out as NC10419 and carried serial No.8. The original color scheme was orange wings and a black fuselage. N10147 was restored prior to 1963 and at that time was owned and flown by Robert L Morris of Springfield, Ohio. The plane modeled here is the restored aircraft. The color scheme is horizontal flying surfaces in white along with the movable rudder. The fusela8e and fin are Loening Yellow with black trim as shown.

My radio control modeling has been involved with several biplanes. This goes back to the days of galloping ghost proportional. It is not at all surprising that my entry into the field of electric flight would linvolve a biplane. The reference material used for this effort was published in Model Airplane News, April 1963. The drawings and information were the work of Richard Anderson. My plans and information are from his efforts. I have preserved it through several moves always with the intention of using it someday. This also points up my strong love for things scale. This one just had to be built when I had the time.

The model was designed with sport scale in mind. However, for those who might desire something more precise, the airframe construction is as scale as possible considering the difference between full-scale and the model. All dimensions are as accurate as they could be made. The only liberty taken with any outline is enlargement of the stabilizer one rib spacing on each side of the fuselage. (You would have never guessed it, if I hadn't told you.) The scale outline is shown, but l would strongly advise against its use for geared down electric power. My experience has shown that a small stabilizer just isn't worth the trouble it can cause. It is possible to lly a model with a scale stabilizer, but it isn't something associated with pleasure. It can result in continual damage to the model's undercarriage. Geared down electrics tend to fly nearer to scale speeds, and therefore do better with a slightly enlarged stabilizer.

The following design ideas helped put this ship together. First, the wing structure was made as light as practical, and the strength was provided by the biplane rigging. This means that all rigging wires and struts are functional, and the plane cannot be flown without them. This applies also to the stabilizer/rudder brace wires.

Second, the balsa sheeting used to simulate the fuselage front cowling also supplies the strength to support the ply bulkhead on which the motor and speed reducer are mounted.

Third, instead of sheet doublers to provide fuselage strength. ply gussets are used at c ritical joints in the fuselage framework. Another concept that came out of this project was theattac hrnent of the stabilizer with small screws and blind nuts (T nuts) in order to provide for adjustment. Once the rigging is in place. it is not easy to make changes in the biplane's wing incidences. This allows adjustment at the stabilizer for best flight trim.

The model was designed for, and test flown with, what is now called the Astro 15 standard flight system. In the meantime, Astro Flight has been developing a 15XL with more power. more duration and about four ounces heavier. Best flight trim with the new system may require some small adjustments. These are to be covered later..." 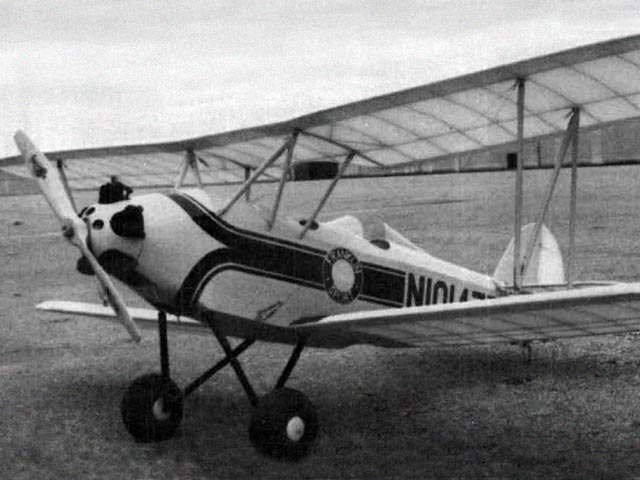