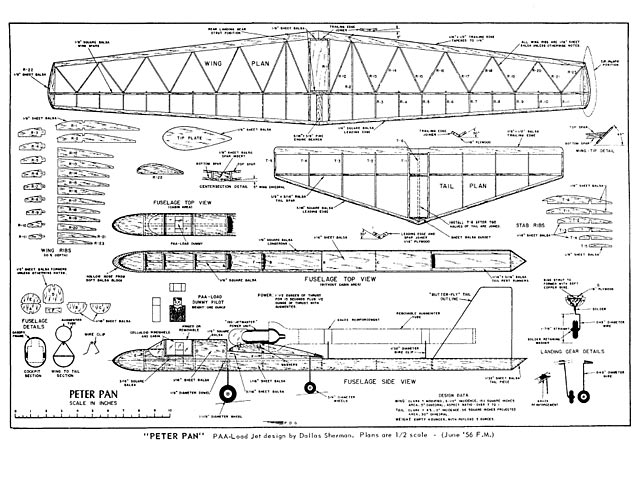 Quote: "PETER PAN is designed for contest operation and must be built true and strong. The finished weight of our model was slightly more than four ounces.

It is assumed that all of the pieces needed for construction will be properly cut, shaped, hollowed, bent (as the case may be) according to the plans, before you start assembly. There's one exception: Do not bend the lower part (that which extends beyond Former G) of the nose-gear leg wire until after this piece is installed in the bottom half of the fuselage.

FUSELAGE AND NOSE GEAR: Build the bottom half of the fuselage first. Except for the nose and tail blocks, this part is a 1-3/8 in diameter half-tube.

Work directly over the plan. Pin down the 1/8 square longerons and the 1/16 deck spreader piece, then add bulkheads A, B and C. Cover the entire frame with 1/16 sheet making sure that the material is securely cemented to the frame at all points.

Lash the nose gear to Former G, leaving the lower part of the gear unbent as mentioned previously. Former G is made of plywood as noted on the plan. Push the wire through the bottom, alongside of the Former A which is furthest to the rear, and force the plywood up against the former to form a sandwich. Use a liberal amount of cement and check to align the gear on the centerline. Once the assembly has dried, bend the lower part of the gear strut to the required shape.

Build and install the tail rest, using four pieces of 1/16 sheet which have been cut to the proper shape and size. Fit the pieces to obtain the proper dihedral angle, making sure that the tail surface will mount at 0°.

Install a length of 3/32 hardwood dowel through the bottom of the fuse-lage to moor the wing hold-down rubber bands. This is the only dowel used on the model. At other attachment points, rubber bands are carried completely around the fuselage. Add the sheet balsa tail cone as noted, to complete the rear of the fuselage. Attach two wire clips atop the fuselage deck to hold the augmenter tube. The tube should be mounted so that it is centered with the engine and is mounted at the proper height..." 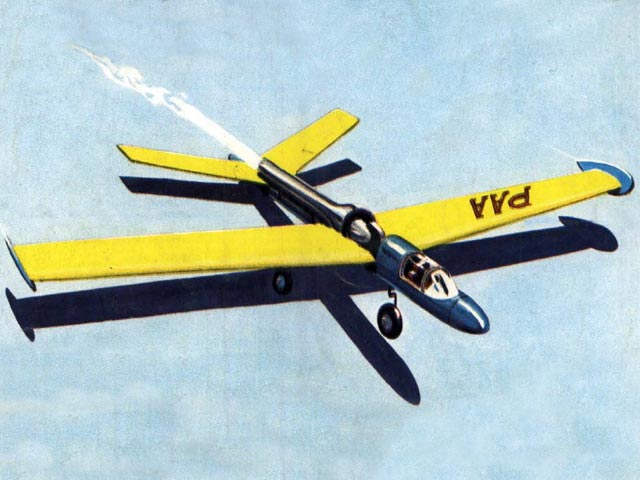