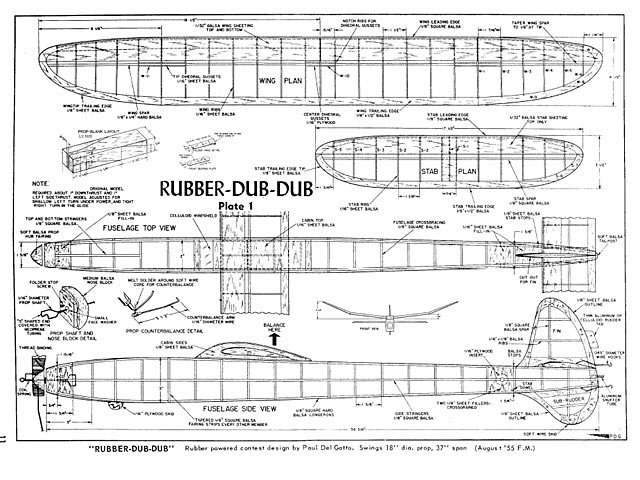 Quote: "Get out of that rut - construct a winner! This rubber crate is just what you need to capture trophies! Rubber-dub-dub, by Paul Del Gatto.

Generally, when you hit on a new design idea, however simple it may be, you can't get everything to work out the first time without difficulty. But the 'Rubber-Dub-Dub' is one of those rarities - everything was right from start to finish. Just a little turn adjustment, some side-thrust adjustment, and she was 'in the groove'!

It was pretty calm when we left the house with our newly completed model, but it was a good twenty minutes drive to the flying site - and by the time we got there, the wind had stepped up its pace considerably. Like most model builders, we didn't want to leave the flying site before we had done some flying, no matter what. So, hurriedly, we assembled the Rubber-Dub-Dub and installed the prop and rubber motor.

Huddling alongside the car on the downwind side, we balanced the model on our fingertips as best we could, underneath the center wing panels. Then we shifted the wing to coincide with what we felt was approximately the center of gravity. As we moved away from the car to test-glide the model and perhaps venture a few turns..."

Formers (sheet2) and article page 1, with some text and pics, thanks to theshadow. 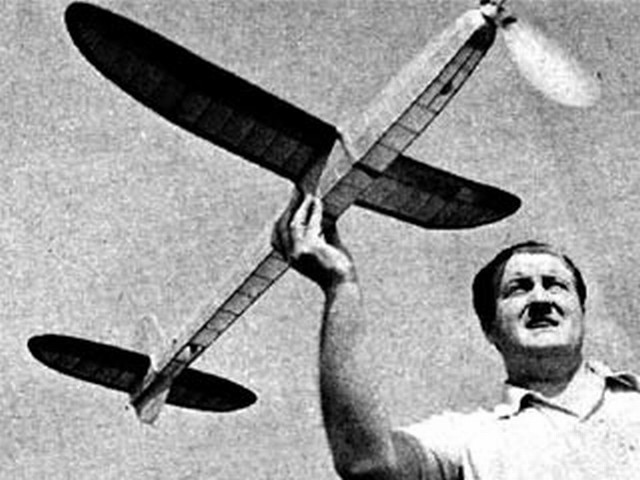