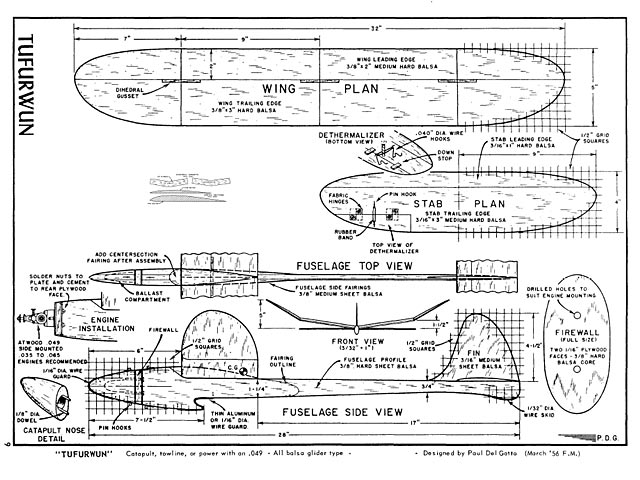 Tufurwun. All balsa type glider. Catapult, towline or power with an .049 engine. This plan was printed in Flying Models Decade of Designs (1), published 1960.

Quote: "Phoom! Our 'Tufurwun' screamed skyward, wheeling in a wide-open, left turn. The altitude was sensational, and transition was a smooth roll into a flat glide. What had we been missing, we thought.

Thinking back over the years, we remembered the old Bronx Aero Club and the many catapult glider contests that the club had held. Each week, the members met to break the standing club record. Competition peaked as flight time zoomed higher and higher. The highlight of each season was the annual Snowbird Catapult contest which was held in February. We really had fun!

Ships at these contests ranged from converted hand-launch gliders to the most bizarre creations you can imagine. Construction was far from standardized -and there was much experimentation with materials. Though most models were built entirely from balsa, some had built-up wings, and others featured hardwood.

The best performing ships leaned to-wards the use of a moderate amount of hardwood together with hard balsa. These 'bombs' could virtually climb from sight vertically! Flight times exceeded three minutes in still air - most went out-of-sight on the slightest lift. Even the poorer designs were capable of two minutes at dusk. The general trend favored ships ranging around 50 to 75 square inches in wing area - about the size of today's hand-launch glider. These were the good old days.

We were happy when Flying Models asked us to produce a catapult glider to help stir up interest in this much neglected model type. Rather than rake over old coals, or recap the designs of yore, we decided to start from scratch and work up a ship to modern standards.

Design plans settled around a larger-than-average ship, so we decided to use solid balsa construction throughout. In our opinion, this results in a safer catapult model since hardwood would produce a heavy ship - a flying brick. The use of balsa makes it possible to use a bulkier cross-section which can be shaped to a smooth line contour..." 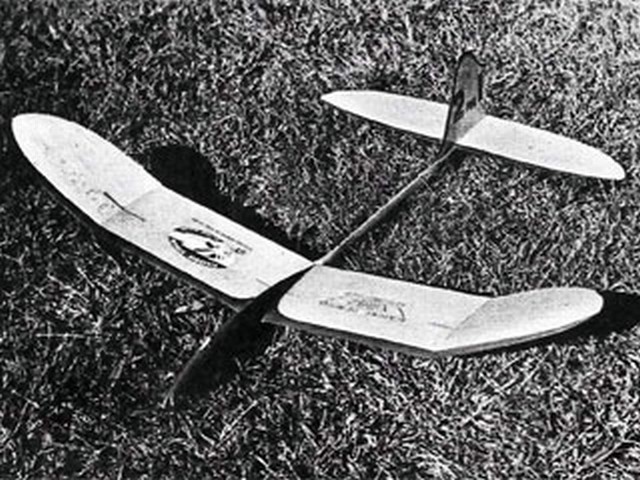