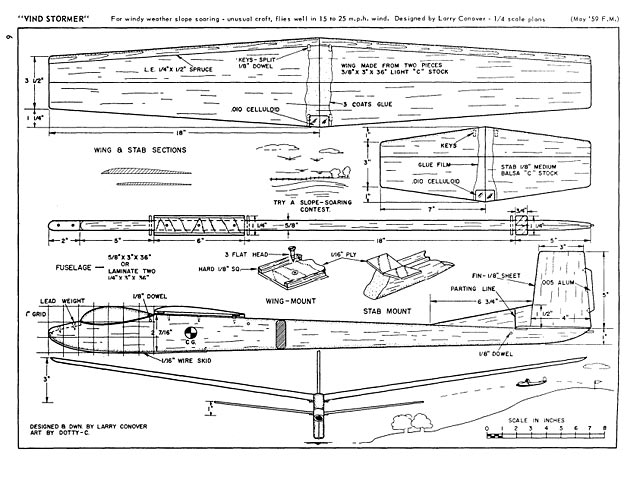 Quote: "Made to fly high off a windy hill, der Stormer is that 'something to fly' during the windiest times. Vind-Stormer, by Larry Conover.

Ever figure out how many days in a year are windy? Most of them, aren't they? Wouldn't you like to have a model that you could fly in any kind of weather? Fifteen - twenty - twenty-five mph? Wind a-blowing?

This is it! Designed to fly in a hurricane. It's a hybrid type of slope-soaring glider. Meant to fly off any hill, small or large. Even on level ground, where you can experiment with velocity shifts in the boundary layer (two to ten feet in altitude). Some smart birds soar in this manner. Unless you have tried slope-soaring, you can't imagine what fun it is. Let's have a go at it!

A firm launch, over the brow of the hill. The glider noses down, but at the same time it rises, tail high, into the current of air sweeping up the slope. If the nose keeps pointed straight into the wind, you're in for a long flight. It's a different sensation, watching the model from above and behind. Almost like you were up there with it.

Look out now! She's veering toward that tall tree far down the slope. A little body-english needed. C'mon baby, back this way, back in the open. Hot dog! She slides slick over the top of the tree. It's clear sailing now, all the way to the valley. Well, don't just stand there. Let's go after it.

There is one feature we think you'll like. You can ram this ship through fences and trees, and keep right on flying. Solid balsa construction throughout. A spruce leading edge protects the wing. Both wing and stab are rubber-banded on for shock treatment. Stab has dihedral to keep it from clipping weeds. You schould see this ship slither through short grass!

Construction is easy. You don't even have to scale up the plans. Just take basic dimensions, and make the parts look like the picture. One place to be careful: Make the incidence angle between wing and stab correct as shown.

The original fuselage was cut from a packing board that comes tied on the outside of balsa bundles. It is hard stuff. If you can't find one of these, just cement two 1/4 x 3 inch hard balsa sheets together. About two ounces of lead is required on the nose. Cement and screw it in place. Leave some room for clayu-final trim..." 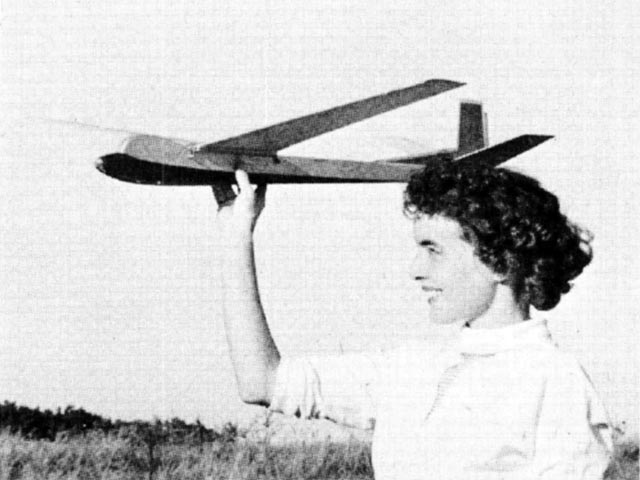