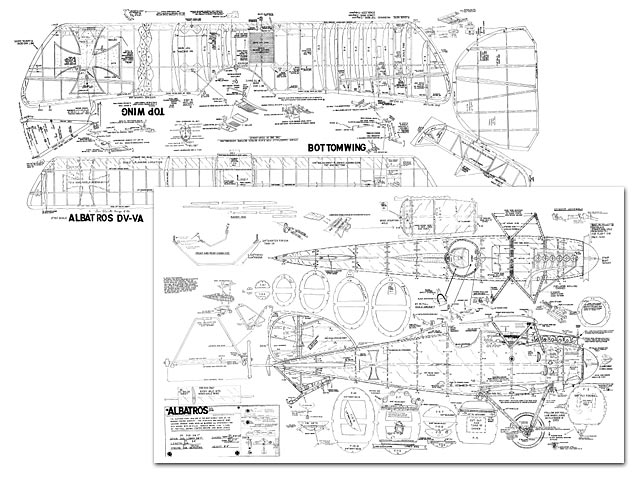 Quote: "Mr Perretti's plans had a personality of their own! They were peculiar drawings that sometimes look as of they were roughly made. However, his designs won many contests. These are the first two which are really works of art and they must be added to any plan collection".

In 1917 the Albatros Flugzeugwerke was certainly the leader in producing German World War I aircraft. In the two seater field, Albatros was represented by its C.III and C.VI in diminishing numbers and by its C.V and C.X in quantities almost equaling the combined output of the Rumpler, Halberstadt, and LVG companies. In the single seater field Albatros outshone all competitors by supplying fighters to the Imperial Air Service at a ratio of about three to every two ships produced by Fokker, Pfalz, and Roland (L.F.G.) combined.

The Flying Circus of 1917 was entirely Albatros single seat fighters. Think of the outlandish color schemes - what great scale models some would be. Von Richthofen, basically all red; Von Hipple, green tail, pale blue fuselage, black 'Blitz' (lightning bolt); Rumey, a red-white candy cane striping on the fuselage; Von Hantlemann, all red with white skull motif on fu-selage; and many more. What glorious memories could be relived if this plane were built for R/C Scale.

During the last three years I have seen only one Albatros fly at Rhinebeck, Lou Perretti was the builder and flyer of that ship, and now through his company (Aerotec Model Engineering Co., Box 116 Lincolndale, NY) he has marketed an Albatros DV/a kit.

The kit box is very large and upon opening it I was amazed and impressed at the quantity and quality of materials supplied. Wing bolts, engine mounts, machine guns, copper wire, rigging wire, metal bolts, control horn material and instruments are all included. These are brand name products such as Sig, Williams Bros, etc.

The next thing that impressed me, and really made the kit unique, was that every single part was labeled according to use. The rudder parts were in one plastic bag, clearly marked Rudder. The wing ribs, fuselage formers, other parts, etc. were all done in the same manner. Every part in its place saved a lot of hunting through the box. These bags are also good for storing the pieces until use. The wing and fuselage spars were all labeled with dimensions and use of each spar.

The pieces appeared to have been individually cut on a jigsaw and then sanded smooth. All parts were accurately cut and easier to work with than die-cut parts.

The two plan sheets are very nicely drawn and labeled. They are packed with ideas from building a radiator to aileron installation to color schemes. I enjoyed just looking at the plans because they are gigantic scale drawings. Speaking of scale, this plane is exact scale with wing airfoil, radiator, number of wing ribs, fuselage farmers, landing gear, wing planking, and more. The plans are large enough to allow building of both wings at the same time, and if you have the room, build the fuselage on another bench.

Aerotec includes some super scale extras besides the Williams Bros. Spandau Machine Guns. These are a scale seat of aluminum, a spinner, and a rough-cut balsa scale engine. From a scale builder's standpoint the kit is excellent.

With these plans and the help of a Profile Publication you could adapt the plane to a D-II, D-III or D-V."

Note main model pic was found online at https://www.rcgroups.com/forums/showpost.php?p=45706067&postcount=182 and shows completed Albatros model by Hank Iltzsch, circa 1980, with thanks to Mordecai Murphy. 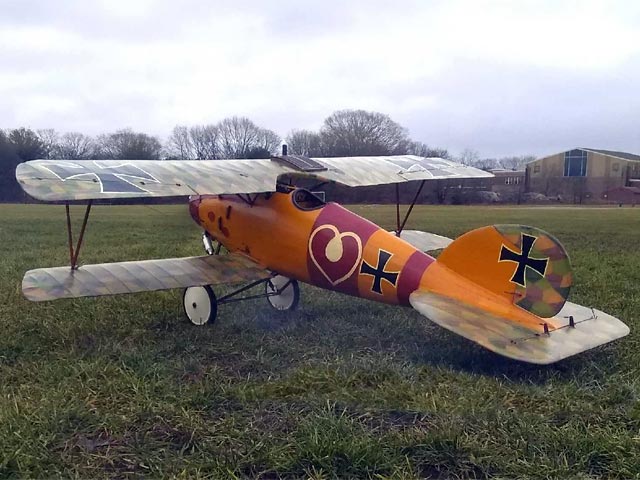