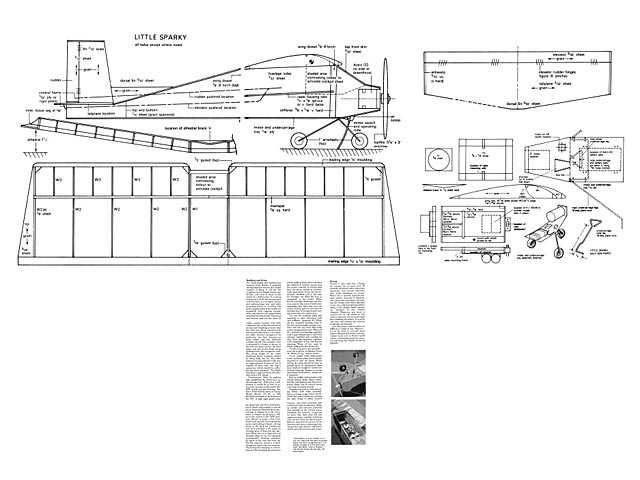 Quote: "As a basic design and construction exercise Little Sparky is probably the smallest size electric R/C model capable of flying in all but the roughest (above 25mph winds) conditions, and even in those in the hands of a skilful pilot. It is cheap and quick to build and incorporates such features as a complete 'motor and undercarriage tray' and 'radio mounting frame' in to which the most complex parts of the model are assembled with complete accessibility and ability to be tested before installation in the model.

The motor and battery used are the Astro 02 (radio control version). The radio comprises two of the sub-miniature servos each weighing no more than 21g (4oz) now being introduced by several manufacturers, a two channel radio receiver, stripped of its protective case then mounted on foam rubber, and four 100ma/hr cylinder nicads.

The complete radio is mounted in a frame as shown in the full-size parts layout, the final shape and size of this frame being determined by the equipment used. The all-up weight of the 'radio mounting frame' complete should be about 100g, say 4oz. The radio battery (if using cylinder cells) may be rapid charged if required, but is capable of more than one hour's operation, which should be sufficient for most purposes.

The flight duration is approximately five minutes with a full charge.

Construction: Start by making and assembling the motor and undercarriage tray. If the pilot is left-handed it would be as well to reverse the location of the motor ON/OFF switch and the airscoop. The lever of the switch (Astro or Tandy (Radio Shack) 274-324 or 326) should be arranged to push forward for 'ON'. A semi rigid plastic tube
(an empty ink tube from a ball-point pen is ideal) long enough to extend about 12mm (1/2in) beneath the under-carriage is slipped on to the lever; when it strikes the ground it will move the switch to the 'OFF' posi-tion.

Obtain or make a thin cardboard tube capable of accepting the motor and holding it firmly, cutting away at the back for cooling air exit, then assemble to F1, using an oversize piece of balsa for this purpose. When dry cut to final size and chamfer edges as on G/A (general arrangement) drawing..."

There seems to be no printed photo showing the full model, just these 2 detail shots. If anyone can submit a pic of this model, that would be great. 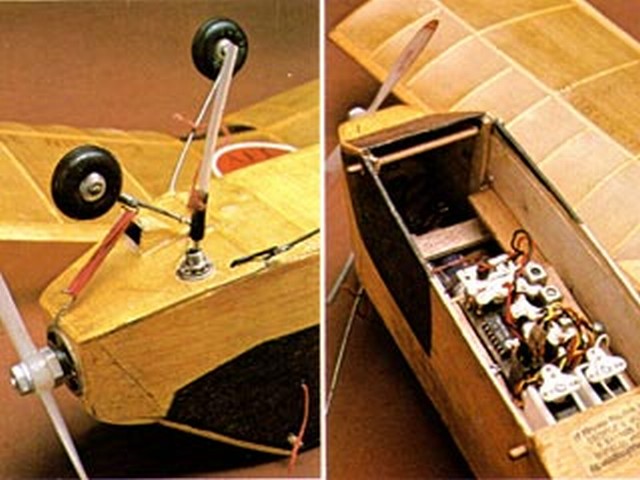