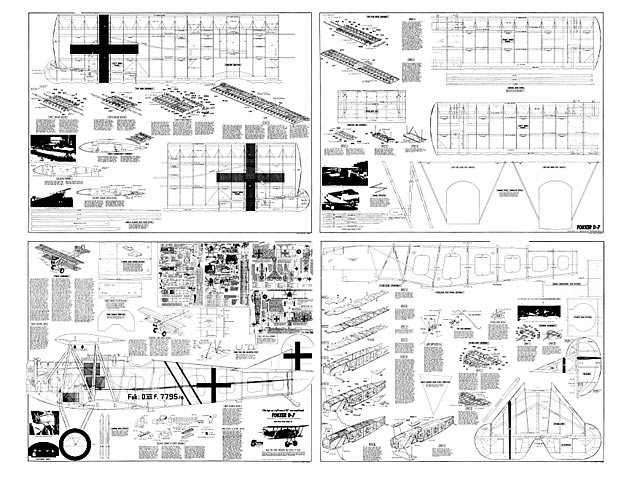 Quote: "Review: A SterlingFokker D.VII. This iconic fighter from the Great War, and the mid-1970s R/C in 1:6 scale is modified and constructed with electric power and sound simulation by Mark Wilkins, with flying photos by Kent Kannenberg.

It's amazing what can be found online these days, from the vacuum of cyberspace came this 1/6 scale 58-1/2 in (1485 mm) span Sterling Models' kit that harkens back to the mid-1970s when fully proportional radio control flying was still in its infancy.

The contents of the kit includes generous good quality balsa, hardwoods, and even a formed metal cowling and screen. The approach to the wing and fuselage construction is characteristic of Sterling, so robust is the word of the day. This kit was originally designed for a glow engine of between .45 and .65 cu. in., which is reflected by its construction methodology. I wanted an electric flyer with a sound module so I needed to modify the Fokker to accommodate these changes.

Wings: The wings feature a symmetrical aerofoil that will allow good stunting and smooth flying. Interestingly, the lower wings begin as symmetrical at the root then gradually become semi-symmetrical at the tips. The increased lift at the tips no doubt would help landings at slower speeds and prevent tip stalling. The construction for both wings followed a similar pattern; the formers are slid onto spars and aligned over the plans. The spars are blocked up as the bottoms of the formers are not flat.

The leading edge is diamond shape in section and fits into notches in the formers. The TE is notched to accept the former ends. The leading edges of the wings are sheathed in the characteristic Fokker manner with a dental or crenelated shape while the scalloped trailing edge is a separate piece that makes assembly easy.

Plywood plates are installed to accept the interplane struts, and a plywood box is situated in the middle of the top wing, this is where the servo for the ailerons would have originally been placed. I however, prefer to have two servos in pockets directly in front of each aileron, so this was the first modification I made to the kit, but certainly not the last!

The next mod was to slightly modify how the top wing went together. The original top Fokker wing tapered on the bottom and was straight on the top giving it partial dihedral. The kit did not feature this so I was able to approximate it by altering the joint between the two top panels and the centre section to approximate the Fokker design. This was accomplished by widening the slots in the formers where the spars overlapped to allow some movement of the outer wing panels up and down.

Next I simply put a straight edge on the top of the entire wing and blocked it up until the glue dries; you will want to use 15 or 30 minute epoxy. I eliminated the heavy and needless servo box and reinforced the centre formers with scrap balsa.

The next modification I made to the wings was to install a grooved basswood strip to accept the rear struts of the landing gear; you can locate this by referring to the plans. The Sterling kits often feature a rear strut that 'floats' through an opening in the wings or fuselage allowing the struts to flex a bit on landings. I planned on using a shock absorbing system in the lower 'wing' that acts as a spreader bar so this feature was unnecessary. (Interesting note: In the real D.VII this small wing generates enough lift to exactly offset the weight of the landing gear!)

The final modification I made to the lower wing was to sheath the bottom of the wing with a panel that had a 4 in diameter hole in it for the speaker, which will be mounted face down in the fuselage. You could mount the speaker to the wing, but then you'll have wires to contend with if you remove the bottom wing for torage/transportation.

Fuselage:The fuselage is a straightforward build from sheet and strip balsa over the plans with ply doublers in the front. You'll want to get the Sterling system of landing gear and cabane struts out of the way early, as it is a bit fussy. There are several ways you could do this differently, but I sought to preserve some of the character of this kit so I stuck with the old style engineering.

The bulkheads reflect the fact that this kit was designed for glow power, so I needed to modify them to accept electric power. I wanted my battery compartment on top so I made a deck that ran across the first three bulkheads, notching out to make it fit properly. Once you've finished fussing with the forward section of the fuselage, you can assemble the two fuselage halves around the formers, clamping as you go.

You can now finish up the battery compartment and mount the motor on an angled plate (1-2 degrees down and to the right). I used a Tacon Bigfoot 46 4126-670KV brushless motor. I cut a slot in the aftermost bulkhead of the battery compartment to accept the deck that will cover the battery and serve as a mount for the dummy Mercedes engine. I also notched out for a dowel on either side of the compartment for a Velcro strap to hold down the battery, which in this case is a 4S 4000 mAh LiPo. I made the compartment large enough to hold a wider battery in case I wanted to upgrade to a 5S.

Now is a good time to test fit the lower wings, and begin to construct the modified spreader/aerofoil of the landing gear. As mentioned, I wanted a bungee suspension like the real plane, so I needed to carefully modify the existing structure to accommodate this. You'll start by cutting off the axle portion of the main struts (you're committed now!) Next, you'll want to notch the aerofoil former to accept the new axle and test fit. When the fit is good, epoxy and clamp the whole mess together. Now you can dry fit the rest of the spreader per the instructions, carefully notching each one to accept the new axle..." 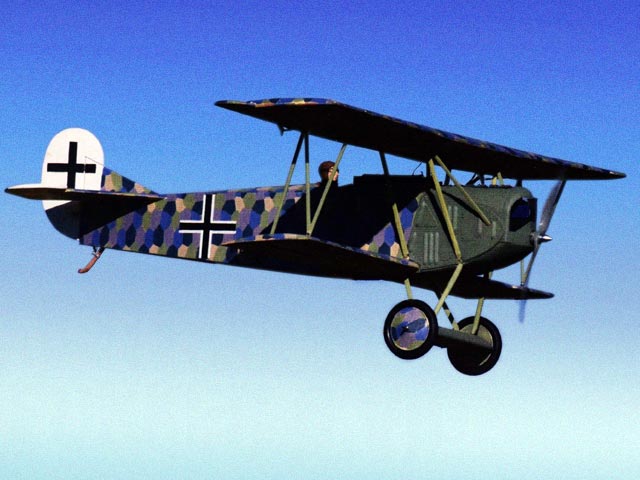 The fuselage formers are missing and without a top view they are hard to interpolate. Two front views with the cabanes help but would leave "most" modellers at a loss to complete the model. I am very experienced at building from less that req'd and this would push my envelope. I have the patience to make parts over and over in order to succeed, and that is what this would take Sorry but someone will add patterns one day I hope. It will be oober popular then.
anon - 17/09/2014
Good point. Does anyone out there want to volunteer and draw up a top view and some formers?
SteveWMD - 17/09/2014
The electric power article certainly intrigues me. The motor used is identified, but a couple of other things are omitted. Does anyone know what sound unit was used? And what would you expect the weight of the finished model to be? I don’t have any experience with large electric models, so don’t have a sense of what we’re talking about here. Take care,
James Hickman - 09/07/2020
I purchased a copy of this kit and it was partially started. One of the things I need are templates for the ribs of the wings as they are missing and there is no rib templates shown on the plans. Any help would be appreciated.
Mark - 02/08/2020
If you enlarge the plan, the upper right corner contains detailed, multi view scale drawings of the plane from the August and September 1951 issues of Model Airplane News, by Joseph Nieto. These small views, in conjunction with the full scale side view, are sufficient to derive a set of formers. As regards the rib profile, this is delineated in three places: the side view, the servo compartment assembly view and the jig block assembly view.
Jan Novick - 02/08/2020
Thank you Jan. I'll look over the plans more carefully!
Mark - 03/08/2020
Add a comment