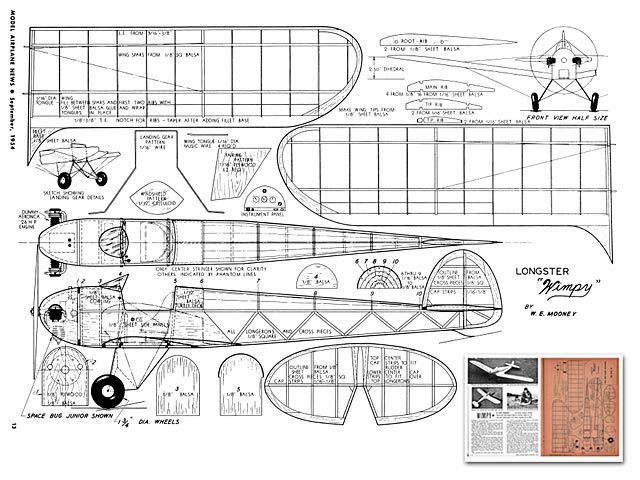 Wanted! A scale model that has pleasing lines, is easily built, and will fly well free flight.

With these requirements in mind, Les Longs Longster Wimpy was selected. The consistent surface shapes and smooth curves, coupled with a slab-sided fuselage and low wing, fulfilled the first two requirements. The long tail moment and ample tail size indicated a model which would fly with but one modification. Dihedral was increased, this being the only deviation from exact scale.

For the detail hounds, the external cylinders and open cockpit provide that final touch. Without the cylinders and cockpit detail the model still makes an excellent sport type low-wing free flight.

Les Long, a home builder of note, produced at least four designs between 1928 and 1934, of which Wimpy is one of the prettiest. Powered with an Aeronca 26 horsepower engine it had good performance, due to clean lines. Wimpy is a rather simple scale job from the construction stand point and requires only a few remarks to clarify some fine points.

The fuselage is the conventional longeron, former, and stringer combination. Use very hard balsa for the longerons. One-eighth inch sheet fills between the longemns sides and bottom iorsard of the wing trailing edge. Wings are of conventional construction. Wing attachment is discussed later.

The horizontal and vertical tails are constructed flat, then 1/8 x 1/16 in cap strips are added. Sand to a streamlined shape and a warp resistant tail results.

The landing gear is critical; it must be strong since it takes most of the hard knocks. Use a strong cement, Ambroid or equivalent, to cement the main wire into the fuselage. Install the wires shown in the front view and sketch. The lower aft wire goes through a hole in the fairing and is bent in a 3/32 in diameter loop for a flying wire connection. Solder all wire joints. Wrap the main wire and fairing with silk or nylon to complete the job.

The wing attachment utilizes rubber tension on the flying wires to hold the wing and provide quick disconnects in case of collision. Four 'S' hooks are required from .028 wire. Two hook into the loop at the bottom of the fairing to hold the lower flying wires, and two to connect the upper flying wires to the rubber band which runs through the tube in the fuselage half way up former #4. The wing tongues locate the wing on the fuselage with the correct incidence.

To keep the test flights tame use a 7 x 2 prop. It was found that a slight amount of up-thrust was required because of the high thrust line. The correct amount is indicated on the plans. Make sure there are no warps in wings or tail. If there is tail grass available test glides are in order. Otherwise, find a smooth take-off area and try low power, prop on back-ward, taxi tests increasing power until you get a take-off. Keep the turns shallow and to the left." 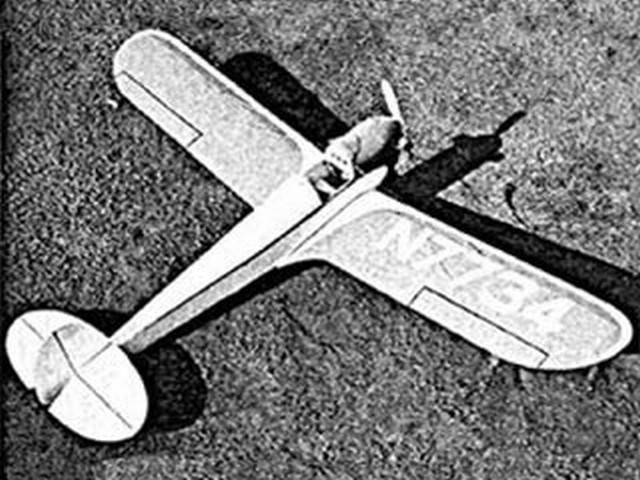