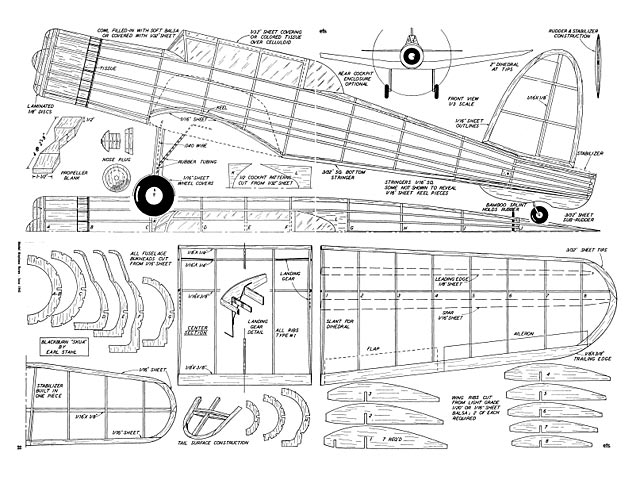 Quote: "Build and fly this thrilling miniature of Britain's most famous carrier fighter. The Blackburn Skua, by Earl Stahl.

THE Blackburn Skua, two-seater fighter and dive-bomber, one of the most widely used weapons of Britain's powerful Fleet Air Arm, is designed to meet the exacting demands of aircraft carrier planes. Because of its deadly striking power, wide range and fine performance, it is considered a most formidable fighter.

Structurally a low-wing monoplane of all metal construction, the Skua is similar in many respects (except beauty of line) to the Vought Vindicator scout-bomber of our own navy. Like the Vindicator, wings fold to conserve deck space yet they are strong enough to take the stress of screaming dive-bombing attacks and sharp pull-outs once the explosives are released. Flaps at the wing trailing edge reduce diving speed and for slow approach upon boarding. An arresting hook lowered from the fuselage belly stops the craft on deck. The plane is divided into a number of water-tight compartments to keep it afloat in the event of emergency landing. A very complete set of navigation equipment makes possible long over-water flights.

Offensively and defensively the Skua is a powerful foe. In special racks beneath the wings nearly a half ton of bombs of varying sizes and types can be carried. Four forward firing machine guns jut from the wing leading edge and the observer's cockpit is equipped with two free-firing Brownings. The engine is Britain's famous air-cooled, sleeve valve 900 hp Perseus producing maximum speed of 250 mph.

A modified version of the Skua is the Blackburn Roc. In most respects this plane is similar except that it is fitted with one of those deadly, power driven, multi-gun turrets. The enemy is blasted from the sky by flying along side and delivering a terrific broadside.

Despite its rather unusual appearance, the model Skua is interesting to build and fly. We have accurately reproduced the prototype appearance and flying qualities, yet the construction is comparatively simple. The original model was capable of making graceful, high altitude flights of about 60 seconds duration.

The pages of plans are drawn full size and the two pages with fuselage details should be joined together. It is best to make tracings of the various pages to keep the magazine intact. All balsa wood should be selected carefully to assure a sturdy, light structure; make all frames accurately and finally cement each joint firmly.

CONSTRUCTION: Construction can be started with the wing which is made in three parts and it will be necessary to make a left wing plan. Cut the required number of ribs from 1/16 or 1/20 light grade sheet balsa - preferably the later, if available. Sand them carefully to exact shape and size and cut the notches for the spars. Spars and leading edges are cut from sheet stock as indicated and the trailing edge is a tapered 1/8 x 3/8 strip. Tips are cut from 3/32 sheet and assembled over the plan. Assemble the parts right over the plans using pins to hold in place until the cement has set. Finish the parts by cutting and sanding the tips and edges to conform with the airfoil shape. The three parts are next assembled with 2 dihedral at each tip.

The keel and bulkhead method of construction is employed for the fuselage. Notice how the bottom of the fuselage has a curved recess into which the wing is later fitted. Cut the various parts for the four keels-top, bottom and two sides, from 1/16 sheet as shown. Bulkheads also are 1/16 sheet and only the notches shown are cut out; others are marked to be cut later. Assemble over the plans by pinning the top and bottom keels to place. Half of the bulkheads are cemented to position and a side keel attached. Now remove from the plan and add the remaining bulkheads and keel. Stringers are firm 1/16 sq stock. Attach stringers closest to the side keels first and on both sides at the same time to keep from distorting the fuselage. Cut notches as required for a neat, accurate job. Where the wing fits in, curved 1/16 thick pieces are cut to fit exactly to the wing's upper surface.

From section A to B the nose can be covered with 1/32 sheet or pieces of soft 1/16 sheet can be fitted between the stringers and bulkheads and trimmed round to represent the metal cowl of the real ship. Either method is satisfactory; we used sheet covering on our model. The extreme front of the cowl is made with laminated discs of 1/8 sheet..." 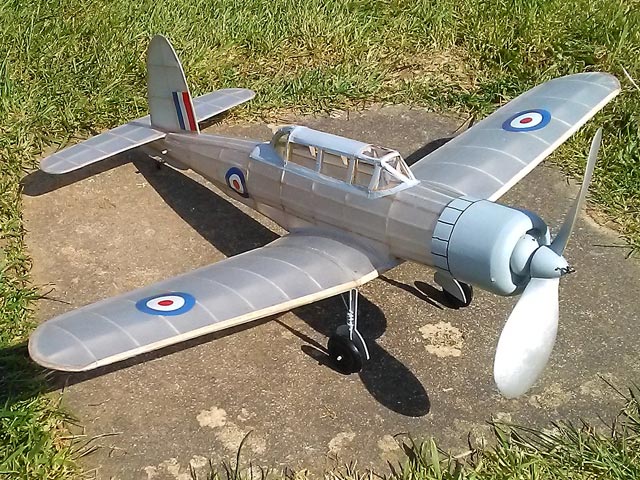 Good morning Mary. I hope you are all well and keeping safe in these difficult times. A couple of photos attached of the Earl Stahl Skua from your oz3326 [main pic and 006]. Not flown yet for obvious reasons and not one of my best efforts . The covering is dreadful but as it only really has to please me and I am easily pleased it will be ok .
Very best regards,
TrevorTabor - 11/04/2020
Add a comment