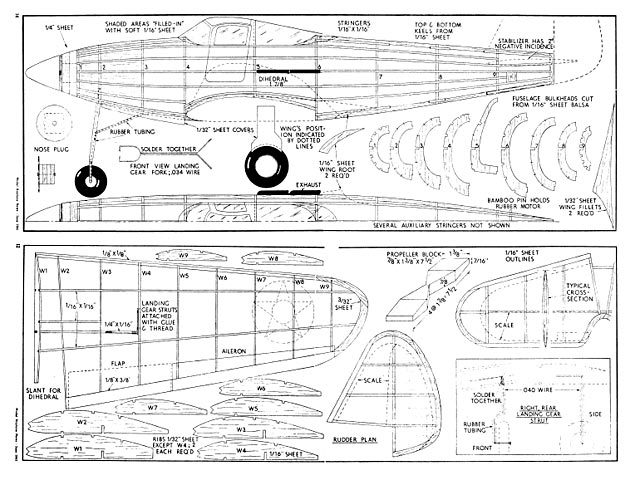 Quote: "Larry Bell's Airacobra, latest and most sensational of the US Army pursuits, its one of the swiftest and deadliest fighters ever to take to the air. With exceptional speed, unusual maneuverability and impressive firepower, it should outperform and out-fight any of the war planes in current production.

Most prominent of the many unusual features of the P-39, as it is designated by the US Army Air Corps, are the tricycle landing gear and location of the engine behind the pilot's cockpit. Use of the three-wheel retractable undercarriage allows the ship to make use of small airports, which is an important factor in war-time operations. The Allison engine of 1090 horsepower is located in the middle of the fuselage, at the position of the center of gravity, and the propeller is driven by a long shaft which passes beneath the pilot's feet. This concentration of weight near the center of gravity aids in making the ship more maneuverable. The fact the engine is not in the nose permits convenient installation of the heavy armament.

The P-39 is probably the heaviest armed singleseater in production for Uncle Sam. Poking out of the ship's bullet-shaped nose is a 37 millimeter cannon which fires one-pound shells. Also located in the nose are four machine guns synchronized to fire through the whirling propeller blades. (Airacobras under construction for the Royal Air Force will probably be armed with even more machine guns.)

Another unique feature is found in the cockpit arrangement. To enable the pilot to 'bail-out' in the event his plane is disabled, this fighter is equipped with two doors that fall away from the fuselage when a button is pushed.

Performance of the Airacobra is indeed remarkable. The top speed is reported to be over 400 miles per hour and the ship can reach an altitude of nearly seven miles. Landing speed is quite slow for this type plane, for it comes-in at 70 miles per hour - about the same speed as a Douglas or Lockheed transport. The fuel load of 140 gallon is sufficient for a flight of 1,560 miles.

The proportions of the real plane make possible a graceful model with excellent flight characteristics. Despite the low-wing, pursuit design, the little ship is capable of making stable, efficient flights of surprising duration. When being flown from a smooth, level surface, the tricycle landing gear enables the model to make extremely realistic take-offs and landings. The model, because of its snappy appearance and interesting construction will provide many hours of enjoyment both in building and flying.

After becoming familiar with the plans and procedure of construction, you may start to build the fuselage.

Fuselage: Use of the keel pieces cut front sheet balsa simplifies the construction and aids in making the structure more accurate. Trace the top, bottom and side outlines on paper, to obtain the correct shape of the keels. Average depth of the keels is about 5/32; lightly cement the paper patterns to 1/16 sheet balsa and then use a sharp razor blade to cut them out. The section between bulkheads No.4 and No.6 does not have any support at the cockpit but a curved piece conforming to the wings' shape is placed at the bottom, as shown. Bulkheads also are cut from 1/16 sheet; two of each are required. It will noticed that only a few of the bulkheads have notches for all the stringers. Cut out the notches shown and mark the positions of the others, which will be cut later as needed.

Pin the keel pieces into position over the plan to begin actual assembly of the fuselage. Cement half the bulkheads to their respective positions; align the bulkheads accurately so they are exactly perpendicular to the keels. Attach one of the side keels and when the cement has hardened remove from the plan and add the remaining bulkheads and the other side keel. Stringers are light-grade 1/16 square strips. As the work progresses it will be necessary to cut many of the notches for the stringers; Use a razor blade that has been broken to a sharp point for this operation. Once a stringer has been attached to one side, always place one in the corresponding position on the other side to avoid pulling the body out of line. Pieces of hard 1/16 sheet cemented between the stringers provide the anchorage for the bamboo pin that holds the rubber motor in the rear.

As indicated on the plan, the front portion of the fuselage is 'filled-in' with pieces of very soft 1/16 sheet. Individual pieces of balsa are cut so as to fit snugly within the space between the formers and stringers. An exception is the several sections at the bottom into which the front landing gear fork is fitted; leave these sections open as they can finished later. The extreme front of the nose is shaped from two pieces of 1/4 in sheet that have been cemented together. As shown the center of the nose block is cut out to receive the nose plug..." 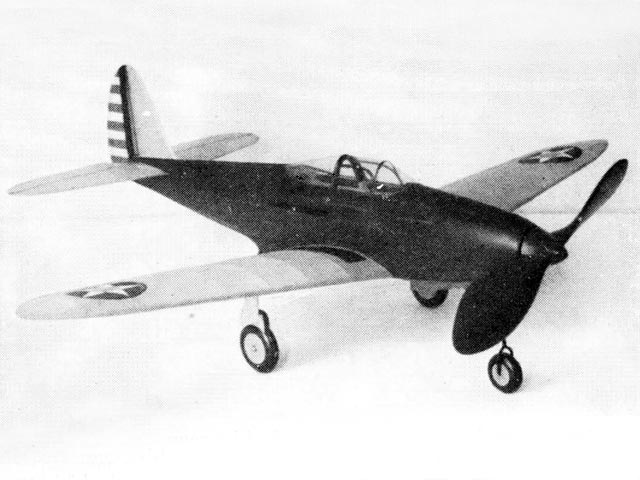