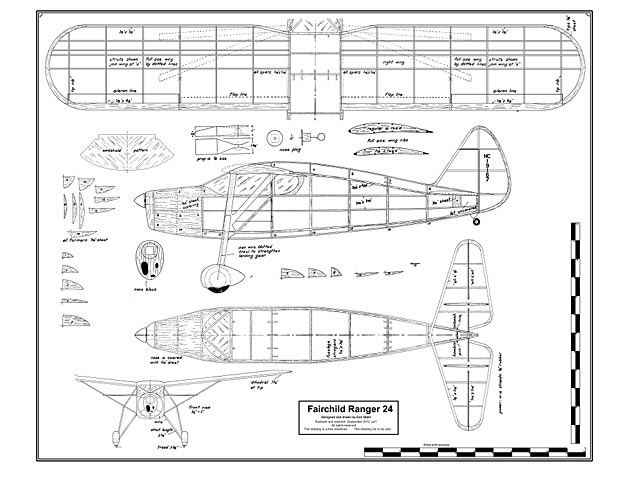 Quote: "A Flying Fairchild 24-K. A Flying Scale Model That Will Be a Joy To Build and Fly. Beautifully Designed, Strong and of Simple Construction. By Earl Stahl.

THE new Fairchild 24K, through ingenious engineering, gives all the desired requisites of the private owner plane. Progressive designing over a period of seven years has developed a beautiful, easy to fly airplane with
excellent performance. Powered by the new 165 horsepower Ranger in-line engine, this model features un­usual payload and performance ­characteristics with ample room and comfort for four persons.

Fairchild airplanes have long been noted for their wonderful performance. With a full load of passengers, baggage and fuel, the '24' will cruise for 560 miles at 127 miles per hour. Landing flaps reduce the speed of land­ings to 47 miles per hour. The rate of climb at sea level is 730 feet per minute and the ceiling is 16,500 feet. Proof of the Fairchild's quality is the fact that the Civil Aeronautics Authority recently contracted for ten more 24's - this brings to 33 the number they have purchased.

To demonstrate the reliability and stamina of the Ranger engine, one recently was run at full throttle, non-stop for 50 hours - equivalent in length of time for a Fairchild 24 to make a non-stop, refuel­ing flight from San Francisco to Bombay, India a distance of 6,750 miles. Features of this engine are extreme smoothness, economy of operation and minimum maintenance.

Model builders will find this plane's design excellent for a flying-scale model. Its aerodynamic set-up makes long, stable flights possible and the general nature of the design eliminates complicated structures. A well-built Fairchild model, if properly adjusted, will be capable of making flights of more than a minute, and whether on display or in flight its appearance is striking, indeed. Of interest is the fact that the model was developed directly from plans and data supplied by the Fairchild factory.

Construction is not difficult. Study the plan thoroughly and read the instructions before beginning actual work. Build directly over tracings of the plans; don't cut or spoil the pages of the magazine. Cement all joints firmly and make the structure accurate at all times.

Fuselage: The fuselage is constructed in the conventional manner. Two 3/32 sq. side frames are built and then joined together, as indicated by the top view, to form the basic fuselage structure. As shown, a 3/32 rib is fitted into correct position as part of each side frame in order that the wing can be accurately attached in the final as­sembly. Halves of each of the fortners are shown on the plan; they are all cut from 1/16 medium grade balsa. Cement them into place and attach the 1/16 sq stringers. In the event notches aren't cut in the formers, the stringers are simply glued atop them. Side stringers are glued directly to the sides of the underframe.

The shaded area of the nose is covered with soft 1/32 sheet balsa. Use the widest stock available and glue the covering to the entire adjacent frame. If the curvature of the nose causes the sheeting to stand away from the formers, cut slivers from it to make the covering fit tightly. Plenty of pins and rubber bands will be needed to hold the covering in place until dry. The nose block is cut from a piece of medium grade balsa; and once it is glued into place its shape is sandpapered to make it blend with the sheet covered nose.

Landing gear legs are attached to the fuselage before it is covered. A continuous piece of .040 music wire is bent to fit to both bottom longerons of the fuselage, as shown by dotted lines, and then extend down the struts to form axles for the wheels. Neatly bind the wire to the longerons with thread. The landing struts are cut to shape from extremely hard 1/8" sheet balsa or even white pine. All struts are streamline in cross-section; a groove on the inside of the legs concealing the wire, and thread and glue will hold the struts to the wire. The tops of the struts are not glued to the fuselage and a small gap is left between them to permit the gear to spring back and prevent damage to the fuselage in the event of a hard landing..." 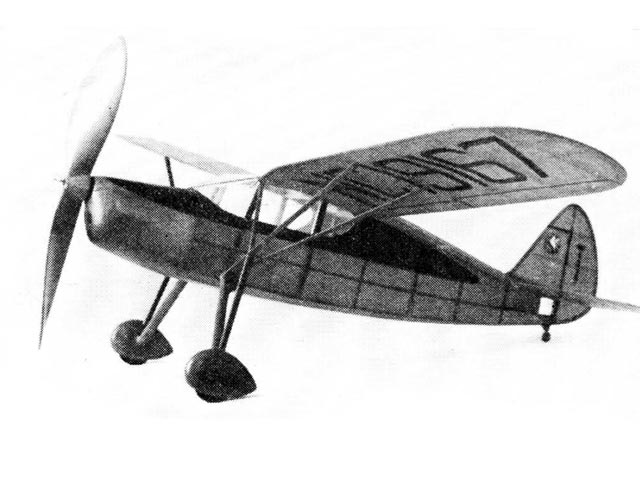