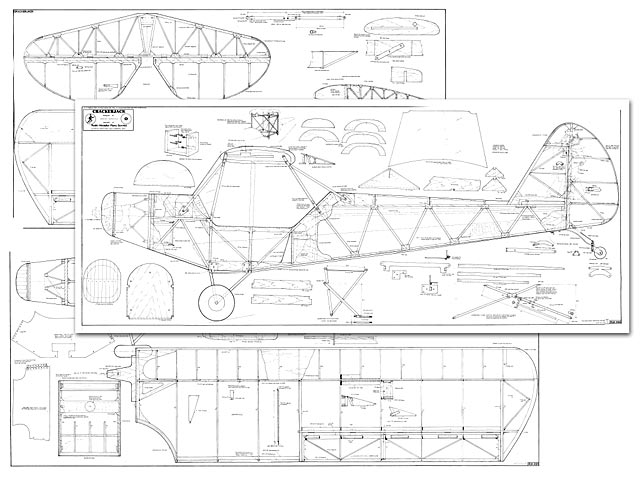 Quote: "IT WAS DURING MY FIRST VISIT to Oshkosh in '83 that I saw the full size prototype of the 'Crackerjack'. In '83, the attendances to the EAA annual convention at Oshkosh numbered 14,000 aircraft movements, yes, fourteen thousand during the week, and over 200,000 in the crowd for the first Sunday of the meeting. It must be - is - the most mind boggling show of its kind in the world. There are representative aircraft of all types there, such as World War II, antique, microlight, replica, etc - a most impressive display. However, back to the Crackerjack; the name, by the way, is coined from a make of popcorn. Their trademark is the Sailorboy and his dog, which appears on the fin and rudder, and the designer of the full size aeroplane had their blessing to use it.

The Crackerjack was designed in 1978 by a talented young man named Peter Plumb, who runs a small company called Woodwing Specialities in Tahachabi, California. It is powered by an 850cc flat twin, air cooled 4-cycle DAF car engine suitably modified for aircraft use. Fortunately, it measures just about three times the physical size of the OS twin 120 FS 4-cycle engine - hence my interest in the aeroplane, and at 1/3rd full size it came out just right for my needs. Of course, it can be fitted with any engine of similar power, but I had a Gemini, so I intended to use it!

The designer was very helful to me, supplying drawings and pictures taken during the construction of the full size aircraft. After checking this information, I decided that the model could be built in exactly the same way, using the same materials and methods as for the full-sized aircraft. I made just three main concessions, the fixings of the wing roots to the centre section, the fitting of a 'Cub' type sprung landing gear, and the 'solid' leading edge wing ribs. The remaining structure is a faithful replica.

If you don't fancy building the Warren truss ribs, you can of course cheat, and cut them from sheet balsa, but I suggest you stay with the rest of the structure for lightness, mine weighs 14 lb complete.

All aircraft fly better if they are kept light..." 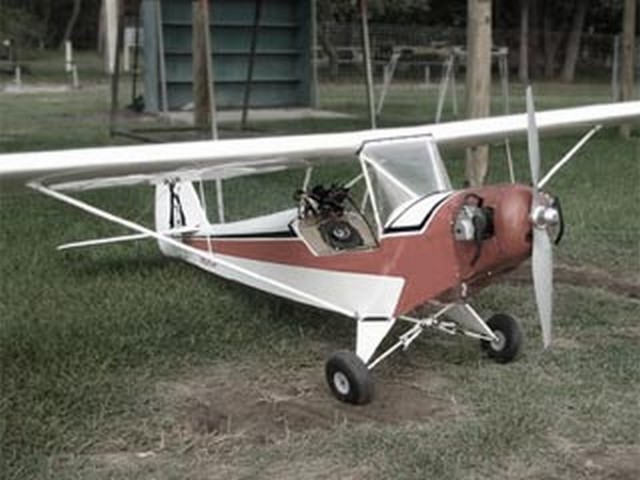