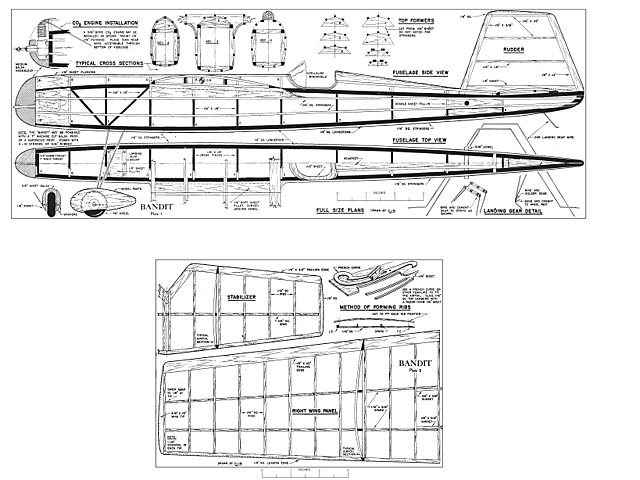 Quote: "Featuring rubber or CO2 power, this lively model is a cinch to build. Use those full-size plans! Bandit, by Don McGovern.

Don't build this ship for your next contest! But, if fast sport flying is what you're looking for, read on brother, read on!

A real contest rubber job is a well designed combination of bare essentials. Frills, appearance and even strength are usually sacrificed to save weight, in order to add more rubber.

The Bandit, on the other hand, has all the strength you could ask for - all the frills you can think of, plus a couple extra. It's fast, extremely stable, and turns in performance similar to a sport gas job. Propelled by a well-balanced basswood prop, this ship is the outgrowth of about fifteen models, and is by far the best of the lot. The first of the series was known as the 'Corpse' and was built eleven years ago. Powered by an 8 in hardwood prop, and 1,400 turns in six strands of 1/8 in flat rubber, it really made your hair stand on end something like a break-away control-line job. According to the rule book 1,400 turns is far too many. Don't worry, the rubber usually broke!

Later experiments with a version very close to this, but a trifle larger, featured 32 strands of 3/16 flat rubber in a 28 in fuselage, with a 10 in hardwood prop. The wing, to top matters off, was 20 in Jasco glider stock. Wound till the winder broke, this winged lunatic catapulted straight up - and down - thereby terminating a short and useless career.

Actually we were in search of the happy medium between a slow-flying contest rubber model, with its big lazy balsa folding prop, and the super-speed type of rubber model of a decade ago.

At any rate, the Bandit is the result of a lot of experimenta- tion, and as such we present it here for your. enjoyment. As a sport model, we can assure you of many fine flights, whether hand-wound or by winder. Its construction is very easy, and the finished result will repay ytur careful work.

The stringers and hollow ribs add greatly to its neat appear- ance, and add only a few minutes to the total building time. Actually, this method of constructing the ribs makes the wing easy to build..." 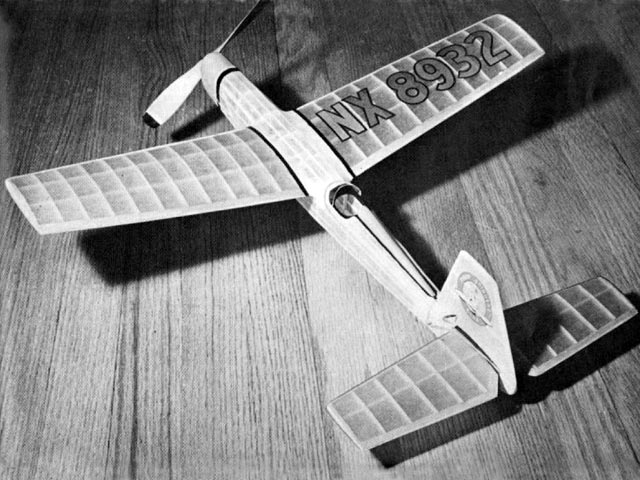