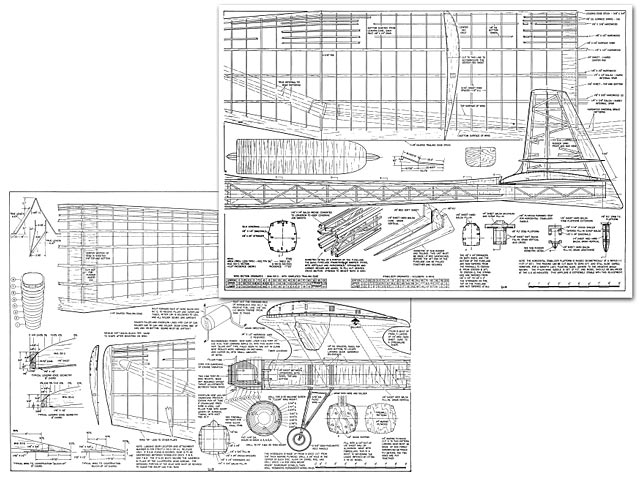 Quote: "This is a big ship, a heavy ship, for existing rules. It does best on ROGs, to gain the extra run allowed. Glide is superb, handles hot .45 power beautifully. Li'l Richard, by Frank Huffman.

We have diligently sought the ever-elusive classic phrase with which to commence a magazine article. But, alas, this search has turned up only one adamant requirement. We are, by modern practice, required to state that:

'This airplane is the Nth refinement over a span of Y years, representing the ultimate of free-flightism and was attained only by sweat, toil, research, test, failure, heartbreak, and finally supreme success.'

The foregoing statement is true only to the extent that the sweat, toil, etc, was supplied by such gents as Carl Goldberg, Frank Zaic, Charlie Grant, Max Bassett, Henry Struck, and many others too numerous to mention. So, from them, I gleefully steal my 'original' design. Taking Goldberg's pylon, Gilliam's fuselage section, Brodeck's engine, Garrett's snuff can, Tatone's timer, Lippisch's recommended wing section, Winter's-Zaic's-Grant's theory, Goldberg's tail plane, Veco's wheels, Edd Alexander's prodding and my wife's patience - we give you Huff-man's 'Lil Richard'.

Li'l Richard is a large, sturdy and extremely stable ship capable of per-forming in weather that grounds most models - designed to meet the average Texas contest conditions - too windy to haul rocks, that is. Originally, power was to be supplied by a Fox .59, but the 173.4 oz weight rule adoption predicted some pretty terrific DT impact loads. The original airplane was built, but put aside uncovered until K&B's new hard liner 'Torp' .45 came on the market. The ship was then modified to fit the .45 (faired nose cone) and finally finished after a year of hanging in my shop in the uncovered state.

Performance wise, Lil Richard has a slower than average power-on velocity, but is absolutely steady and stable. The glide though, makes up many times for the lack of high alti-tude. We have been told by some ex-perienced observers that Lil Richard is the best gliding ship that they have ever witnessed. Naturally, we are prejudiced in its favor. Lil Richard will average four min. ROG (non-thermal) but does not fare so well HL. The extra 5 sec for ROG gets it to that required magic altitude. HL average is about 2:50 (non-thermal).

The landing gear position shown on the drawings is for ROG & HL only. If ROW is desired, then the gear must be moved forward and sandwiched into the nose block as on the ship in the photographs. (Take-off run with forward gear location is about 6 to 7 feet).

Overall construction is simple, but time consuming due to it's large size. Make careful balsa selection for all parts. Use Marine plywood if it is available. Ambroid slow drying cement was used on all joints not ex-posed to the silk covering surface, Pactra butyrate cement on joints that do contact the covering surface. Fill all nicks, slots, holes, etc, in finished framework with 'spackling paste.' Coat the entire balsa surface which is exposed to silk covering contact with butyrate dope, to fill the wood surface. Use butyrate dope and cement to apply the covering..." 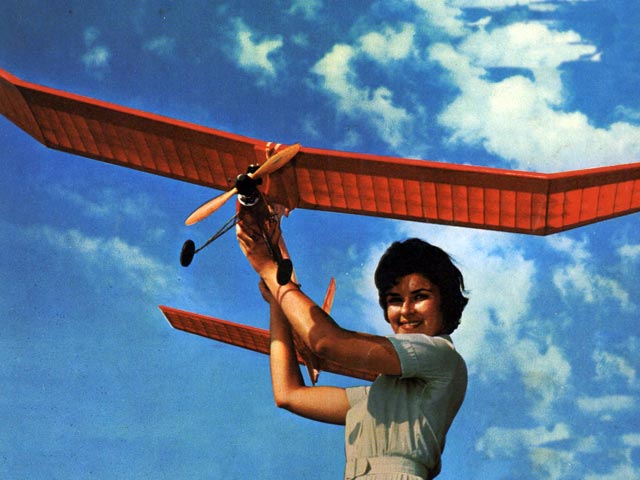