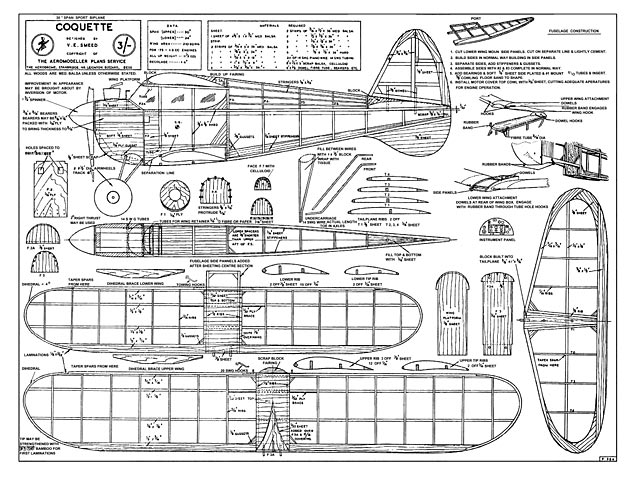 Quote: "COQUETTE was designed to be a rugged little biplane, simple but good-looking, that would supply hours of enjoyment to the chap who flies for fun rather than for pots. It appears that only about 20 percent of this country's aeromodelling population are interested in a climb resembling that of a she-angel resisting the improper advances of Lucifer - most builders aren't particularly contest minded, but want rather realism and a model that won't give them a two-mile trot each time it takes the air. The vertical ascent and super-floating descent were not major considerations in this design, and the result is a docile, easily-trimmed job that will still turn in ratios of 3 or 4 : 1 in late evening air. The ruggedness and simplicity are there, too, and good looks are only a question of taste after all.

All round, Coquette is a job that can be undertaken with confidence by anyone who has produced one successful power model, and it was in fact designed to be within the scope of the relative beginner who wishes to break away from the normal monoplane lay-out. The following notes are written with this type of builder in view, and more experienced modellers are asked to excuse the somewhat lengthy treatment of some of the phases of the construction.

Biplanes have been long neglected, due in all probability to the apparent tediousness of constructing a second wing and exaggerated difficulties in flight trim. Well, a biplane has to have two wings, and since they have to be made, any tediousness should be attacked in the design. Coquette's wings are simple to a degree, and if all the ribs are cut at one time and the wings built together, stage by stage, the extra work just isn't noticed.

As for trimming troubles - four different biplanes (petrol and rubber) by the designer have required no change whatsoever from the original drawings and Coquette, the first diesel-powered one, needed only one pinch of shot at the tail.

In view of the popularity of the E.D. Bee the model was designed round this motor, using the normal upright mounting. Inversion would improve the looks immeasurably, and there is ample room within the cowling for this type of installation. Motors of .6 cc upwards may be used, and the model seems quite capable of handling anything up to the Mills 1-3. It should be stressed that no larger motor than the Bee has been tried (the writer's second model, nylon covered, has a Mills .76) but there is no reason to think that a little more power would produce viciousness..."

Update 04/10/2012: Replaced this plan with a minor revision, text now shows correct dihedral values of 2.4in lower and 3in upper wing. 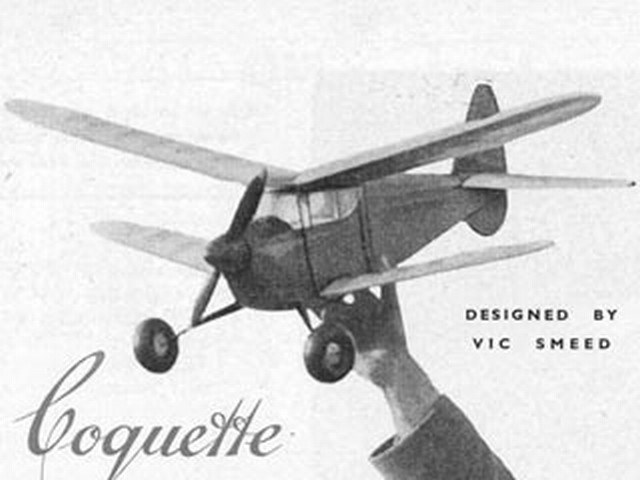