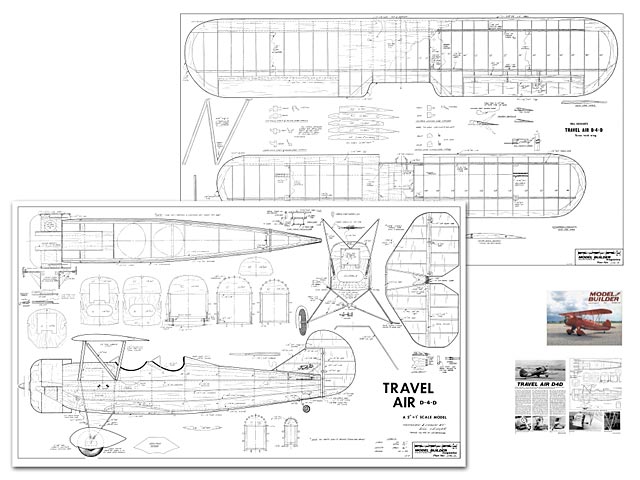 Quote: "Here is Bill Seidler's Travel Air D4D from Model Builder magazine issue 11-78. This is one beautiful bipe! Total combined file size is a bit large but I had to include the color cover shot."

Quote: "By BILL SEIDLER. One of the sexiest looking biplanes out of the Golden Era, and a natural for modeling. The author is quite familiar with the design - he restores the full-size machines!

Travel Air is a name that means an instant trip back into the past, into a network of wires and cabanes, a wide front cockpit and pilot behind. It was quite conventional, and it met the requirements of the goggled, helmeted pilots of the day who thought fliers had to sit in the open air. The Travel Air Manufacturing Company, of Wichita, Kansas, was incorporated early in 1925, with Walter Beech, Clyde Cessna, and Lloyd Stearman as the principal directors. (Those names may be familiar to you!)

The Travel Air series of biplanes established Wichita as the first main center of aviation in the United States. They were used for mailplanes, dusters, and the like. In the movies, as Fokker D-VII’s, they were called 'Wichita Fokkers'. Travel Airs played both sides in war films in the 20s and 30’s; they were in Hell’s Angels and Dawn Patrol. They were very popular with the early Hollywood set. Both Wallace Beery, aviator/actor, and Robert Montgomery, anotherMGM actor of great fame, had Travel Air 4D's. It was a very strong and sleek airplane, perhaps one of the main reasons they were so popular. Wiley Post had his first job as an executive pilot for FC Hall, the Oklahoma oilman, in a 1928 Travel Air 4000. I haven’t adequate words to describe their airplanes and the lasting effect on the pilots who have flown them.

I received my license back in 1937 in a Travel Air B4000, NC174V, with a 220 hp J5. It belonged to my high school teacher, Mr Matty Mack, of Haaron High School, in New York. When I saw pictures of Wendell Reid’s Travel Air D4D, in an old Air Progress (October 1969), the need for me to build a model of it was overwhelming. The easy part of it was data and blueprints, which I have used for the restoration of full-size Travel Airs. All I had to do was scale it down to 2 in =1 ft. Here is some information on Travel Airs that should help a scale builder.

The Travel Air biplane was designed in 1924 by Mr Lloyd Stearman, and he did such an excellent job of designing that, throughout its life, the basic dimensions of the fuselage were never changed. An outrigger gear was added later to the B4000, BM4000and D4000. Standard and Speedwing versions, both with Frieze ailerons, and a larger steel tail section for the outrigger gear models, were manufactured. All of these wings and tail sections were interchangeable with all fuselages. The Standard wings, with balanced ailerons ('elephant ears'), installed on the fuselage, have an upper wing span of 34 ft 8 in, a lower wing span of 28 ft 10 in, an upper wing chord of 66 in, and a lower wing chord of 56 in. Wings, including ailerons, have 296 sq ft of area. The ailerons alone have an area of 27.5 sq ft.

About 25 D4D’s were built, and there are three left that are flying, and I mean flying! They do skywriting and airshows, and for a plane made in 1929, that's darn good! They belong to Nick Rezick, of Rockford Ill, who does a lot of EAA air shows (it is something to see him do his thing in his D4D and talk with him); Jack Strazer and his Pepsi Colaskywriting D4D; and Lane Leonard, a retired American Airlines captain from Los Angeles, California. Why the aerobatic boys have not learned of the outstanding performance of the D4D is hard to understand. It has the structure, power, and maneuverability qualifications. It will do the entire routineof airshow maneuvers from level flight, and can gain 1000 ft. while doing three Cuban Eights. It takes very little effort to perform an entire show routine otner than a little elevator pressure. The D4D cruises at 130 mph + and makes an excellent cross country airplane.

A good print of the Travel Air 2000 is put out by Peter Westburg (July 75 MB). From it, you can make just about all models just by modifying engine and wings, if you know the airframe number and year. The model here is Wendell Reid’s Travel Air D4D (CF-JLW). The Frieze-type ailerons are built to scale, with all hinges exactly like the real aircraft. I use Williams Bros aileron hinges for the slotted ailerons, and they work out very well. For trim, the stab moves up and down 3/4 of an inch with a servo. It works superbly. The wings have a scale airfoil and are very thin. I set up the aileron controls the same as the full-size aircraft, and it worked very well. She has a full swiveling tailwheel, but there are no problems in ground handling because the rudder is very effective (just like the full-size ship). It also has shock struts and shock cords. The plane does not wander on take-offs or landings. The only word for it is SMOOTH.

CONSTRUCTION: Construction involves fairly straightforward all-balsa and ply techniques. Start with the cowl by making two 1/16 x 1/4 ply rings. Epoxy two 4-1/4 x 12-inch pieces of 1/32 ply together so it becomes 4- 1/4 x 24 inches; then fit it around rings. Take the rings out and epoxy the seam; when it has set, put the rings back in and epoxy them into place. Glue some soft balsa blocks together for the front of the cowl (I used 1-1/2 x 3-inch blocks). Rough- cut the inside and outside dimensions, epoxy it on, and finish it by sanding. Cover the cowl with 3/4 oz. glass cloth and two coats of resin, and sand it smooth.

Make the cowling tracks. Glue 1/16 and 1/8 ply together, and epoxy it into the cowl. Note that the top of the inside track is on the center line..." 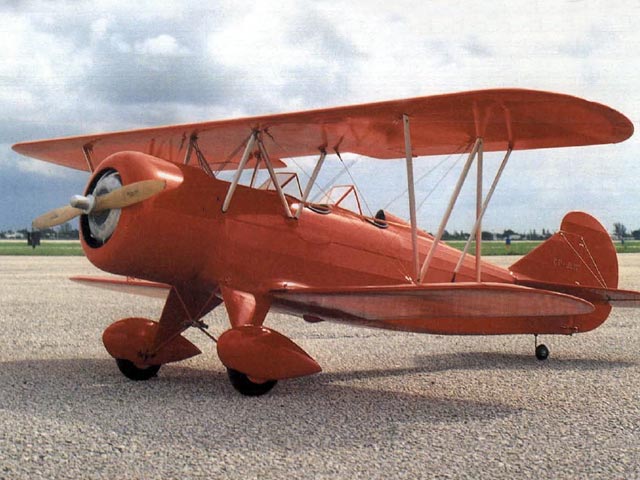