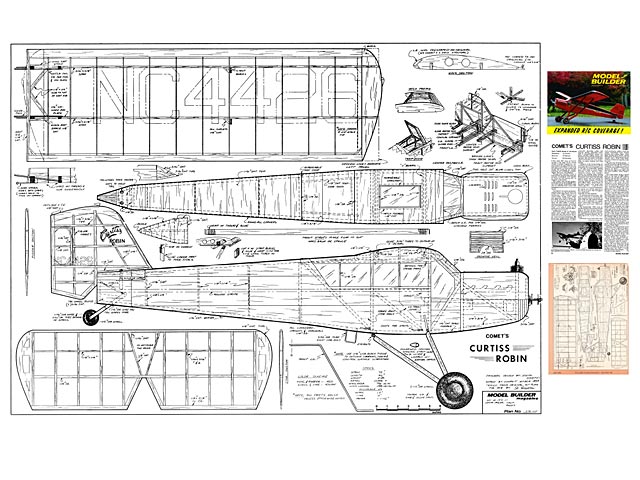 Quote: "Here is Joe Konefes' Curtiss Robin, the old timer of the month, Model Builder issue 07-78. Bill Northrop's article describes the model's historical importance as it was Comet's first gas model kit (circa 1937). Bill Northrop passed away in May 2012. His contributions to model aviation were enormous and will be missed by all of us. I had to include the beautiful cover shot of this model."

The April 1937 issue of MAN carried a full page ad by Comet Model Airplane Supply Co, announcing its first gas model kit, the 6-foot span Curtiss Robin (oz5291). It was to be the forerunner of many famous gas model kits produced by Comet; including Carl Goldberg's Clipper, Zipper, Mercury, and Sailplane.

Though you wouldn't know it from the ads, the plans did credit Joe Konefes, co-designer with Charles H Grant of the famous KG, as designer of the Robin.

The price for all of the above? Would you believe $6.50? And if you happened to already own a pair of airwheels, you could buy the kit, less wheels, for $4.95. Move the decimal one digit to the right, and you still couldn't meet today's prices!

The Comet Robin holds a special place in the heart of MB's editor, because he shared the thrill of helping with the first trial flights of his modeling buddy's Robin, way back then. We were the only modelers in the small university town of Newark, Delaware who were involved in gas models at that time, and Jack's Robin was completed prior to our Scientific kit of Bassett's Miss Philadelphia. Neither of us had seen a gas model in flight, and the Robin's first test hop came at the end of many exciting hand-glides down the 7th fair-way of the local golf club.

With our hearts in our throats, we turned the Robin loose on its first hop, the engine set at about half-throttle. Actually, it was another hand launch, and the ship then proceeded to complete two large circles at about twenty feet of altitude, and as soon as the engine cut. It settled into a smooth and realistic landing. With Jack in close pursuit, we ran to the model, shut off the ignition, and picked up the Robin at the leading edge of the wing. The nose swung up and the hot Gwinn Aero branded our left forearm with a mark that is still faintly visible.

Even without the branding, we'll never forget the excitement of that first gas model flight. The plans presented herein were traced from the original kit plans, however, many of the small 'how-to' sketches have been omitted. Ron Martelet, who sent us the cover photo, taken by John Harast, also loaned us the original kit plans.

Ron's Robin was recently re-covered. It now weighs 5-1/2 lbs, has an old Veco 35 for power, and a Kraft 3-channel radio for control.

The model is quite accurate in outline, the main departure being the landing gear. It would not be difficult to modify the gear to scale configuration, but then, it would only be a scale Curtiss Robin - not a Comet Curtiss Robin!" 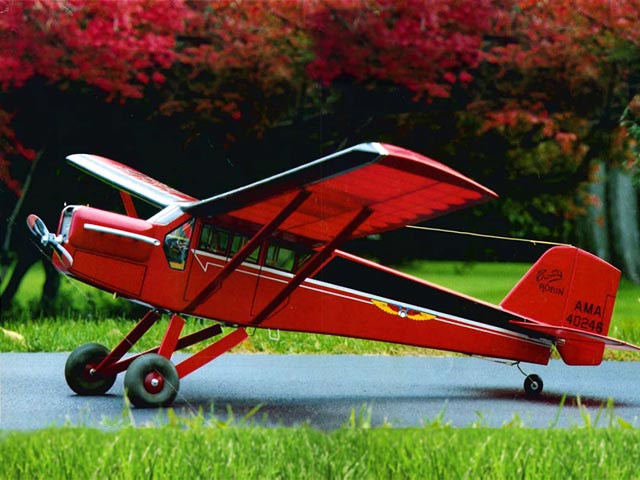