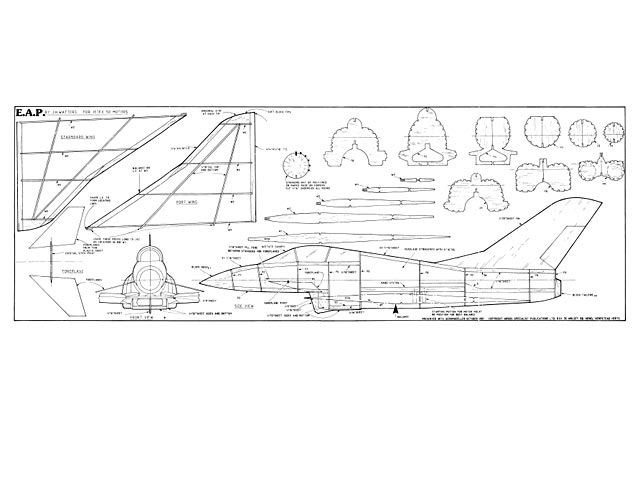 ONE COULD SAY that this model is like the rhyme applicable to brides-to-be. That is: something old, something new; something borrowed, something blue. 'Old' in this case is Jetex and 'new' is the latest experimental aircraft in the UK. Actually, the 'borrowed' part I cannot place, but the aircraft itself is pale blue!

As the full size EAP is a very sophisticated aircraft incorporating a very complex wing section, some deviation from true scale has been made. Nevertheless, the outline and fuselage contours have been maintained as accurately as possible.

Fuselage - this aircraft seems to be nearly all fuselage - should not pose any problem to anyone who has ever built a flying scale rubber kit. Before adding any stringers to the formers, glue the wing root rib R1 into position onto formers F4, 5, 6 and 7. Now add just enough stringers between the formers to ensure that all the formers are located to each other by at least one stringer.

This half-fuselage can now be removed from your board, and the other side built-up on it in the same manner. Do be careful here that the fuselage does not become distorted when adding further stringers. This particular fuselage is shaped from a number of compound curves. The stringers are best added on alternate sides of the fuselage. To obtain the required curves you may find it best to glue the stringers between two or three formers at a time, allowing these to set before proceeding. Use elastic bands, sellotape or masking tape to hold the stringers in place. Placing pins through these small wood sections can lead to disaster. How many of us have done this and have put a finger through an otherwise unblemished fuselage?

Do not rush the fuselage construction - is the motto. It is possible to build the fuselage using plain, un-notched formers, in which case it will be necessary to carefully sight along the fuselage to choose the best stringer location. After completing all the stringer work, the medium hard 1/4 in sq motor mount can be added. Sheet-in with light 1/16in. between the stringers in the position of the foreplane pivot.

At this stage the nose block can be glued in place and the air intake details added from 1/16 and 1/32 sheet.

The fuselage should be lightly sanded, after which it may well be necessary to add in small strips and pieces of balsa between the formers and stringers to effect the correct curvature locally, particularly in the air inlet and rear wing root sections.

Wings: Nothing complicated here. Pin down the 1/16 sq medium hard bottom wing spar and the 1/4 x 1/16 TE, pinning either side of the strip and packing the TE as shown. Glue each wing rib in place, noting that root rib R2 does not have any dihedral angle, this being taken care of by fuselage root rib R1. Add the 1/16 sq top spar, LE strip and tip sheet. The top and bottom spars and LE strip can be shaped and left over-length to use as locators into rib R1.

Foreplanes and fin: I originally made these from 1/32 sheet balsa. They were soon replaced by thin plastic sheet after initial flight testing proved them to be very vulnerable. The plastic ones were cut from the lid of a large margarine carton but anything similar would do. Fix the foreplanes to the pivot after the fuselage is covered. The fin can be made up from 1/16 strip or from solid sheet. If using an all sheet fin, make it from several pieces with the grain running in different directions, or use 'key' pieces to keep it flat. The fin is not fitted until the fuselage is covered.

Finishing Cover the whole model in lightweight tissue. My choice was to cover the fuselage with 'bands' of tissue, which wrap around, filling the space between two formers. Because of the fuselage contours some of these bands will turn out not to be true, parallel strips. I found it best to mark the tissue on the fuselage with a very soft pencil before cutting. Covering the wings is straightforward but remember to place the tissue on the wing with the grain running parallel to the leading edge.

If you have used an all-sheet fin it is not really necessary to apply any tissue. A built up fin must be covered with care taken not to warp the structure in the process.

Each component can now be given a coat of thinned dope. I used a very thin mixture, just enough to apply some tension into the tissue after water shrinking. The wings and fin can now be glued into position on the fuselage. Check that the wings are at the correct dihedral angle and that the fin is straight. A thin strip of tissue can be glued over the root ribs to strengthen the joint with the fuselage.

The cockpit canopy was made from thin acetate sheet moulded over a balsa block former. I must admit that I have no knowledge of whether there are any commercially available canopies that would fit.

The full size EAP is at present painted a very pale blue all over. On some photographs this looks almost white. Colour trim consists of a dark blue spine and fin flash with a blue and white stripe along both sides of the fuselage. In order to keep weight down on my prototype I used white tissue for the whole model with tissue and felt marker-pen trim.

When assembling the foreplanes check that their incidence angle is equal on both sides. To make life easier it is probably best to glue the pivot rod onto one foreplane first, and when set position it through the body. The other blade can then be glued in position and its: angle checked. These foreplanes must be free to pivot but the fit must not be sloppy. They will be glued in place as trimming develops.

I did not put a great deal of detail on my model; foreplane tip sensors and wing tip missiles looked very prone to damage, especially when flying over long grass.

Flying: Even after consultation with the aircraft manufacturers, the exact centre of gravity position remained a mystery. The full-size aircraft is flown using four onboard computers to constantly monitor and alter its configurations. It is thus virtually unstable, or more correctly, 'artificially stable'. After some test gliding and short power flights I found that positioning the motor as shown established an equilibrium. Any correction to pitch is then done by altering the foreplanes.

A very calm day was chosen for initial flight trials. The usual patch of long grass was found! Initially the foreplanes were set at zero incidence and a glide from shoulder height tried. This was carried out with a few butterflies in the stomach; will it spin-in or stall badly? But not to worry; the glide was straight but diving. Try again; this time with slight positive incidence on the foreplanes. The process was then repeated with further, gentle changes to the incidence until a nice floating glide was achieved. My confidence had also increased and I was now throwing the model harder.

The time had now come to test the EAP under power. It is more years than I wish to remember since I last flew Jetex, and for this model I had resurrected one of my old 50b motors along with original wick and fuel. To get the hang of actually handling the motor again, I used only one pellet for the first flight. After a few abortive attempts we finally got ignition.

The flight was straight but diving. A further increase of foreplane incidence was tried. This time the motor was loaded with two pellets. With a launch somewhat reminiscent of throwing a chuck glider, the model went up at about forty-five degrees. The thing I had forgotten about Jetex was that maximum thrust is not developed immediately. The model started to dive, but when at about three feet of altitude it levelled out and started to climb happily. With renewed enthusiasm further flights were carried out, each with a two-pellet charge, this time allowing the motor to burn for a few seconds to gain power before launching.

The model flew with a natural turn to the left. Power flights were smooth and the glides flat and floating. I have not yet tried the model using any of the newly-available motors, fuel or wick, but I am sure that will have to come soon, as my supplies are getting exhausted.

I am equally sure that no two EAP models will ever be exactly the same so trimming will have to be done carefully on a model-for-model basis.

Reference material for the EAP can be found in the October 1986 issue of Scale Models and in many current aeronautical journals.

One thing that building this model has brought to mind is that in the years since Jetex has been away from the forefront of aeromodelling, the change in jet aircraft design has been quite dramatic. Lots of new aircraft are really suitable for Jetex. Anybody fancy a twin? " 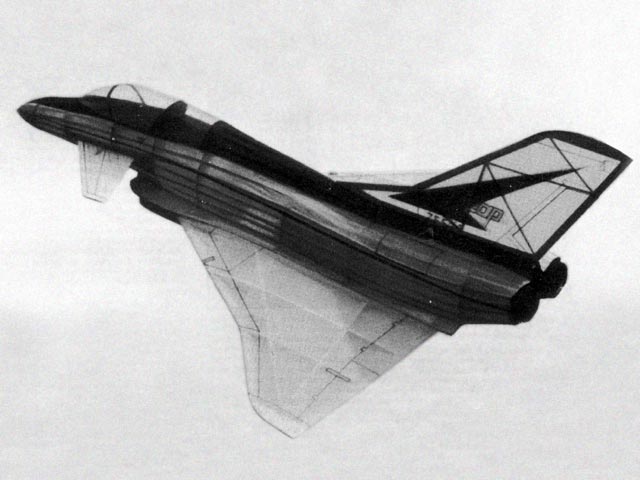