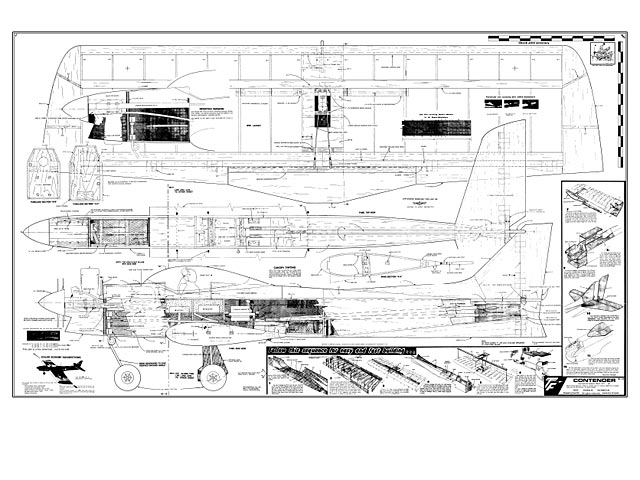 Quote: "Here is the scan of the Contender. It's as cleaned up as I can get it. The original is in pieces and really bad condition. It's from the late '60s or early '70s. Dave Platt designed. Top Flite has a newer version out (with lighter construction, built up tail feathers, separate aileron servos, etc) and there is a mini Contender ARF too."

CONTENDER is perhaps the wrong name for this imported American kit - 'Challenger' would have been far more appropriate with that 'eight hour assembly' notice on the box lid. Indeed, this model had caught my eye some time before in the advertisements from American modelling magazines, and always it was this rapid building time which caught my attention - particularly attractive to a notoriously slow builder!

Actually, these advertisements were most misleading - a fully finished, highly decorated model being illustrated alongside a (presumably!) empty box with the slogan 'eight hours from this to this'. Being rather more realistic, I assumed that this, in fact, referred to just the actual building and without any form of finishing.

Naturally, a foam wing would be an automatic necessity in any quick-build kit. Wrong! Lifting the lid revealed a well-packed box of balsa, with no foam wings, and no space for them if they had been accidentally omitted! A glance at the beautifully clear plans (yes, plural - they have to be joined with adhesive tape) revealed that nothing was missing, and that the model featured entirely built-up construction. Where, then, lay the secret to the magic `build-it-in-eight-hours'? This was still not clear, but the way the die-cut balsa parts fell from their sheets gave a clue.

On studying the plan it was noted that either an upright or inverted engine installation was permitted (alternative ply formers being provided) and the in-verted position was chosen to preserve the appearance of the 'fighterish' design. It was also clear that the equipment to be installed (early Kraft KP series) was considerably larger than modern equip-ment, and my installation would there-fore be different to that advised. In view of this complication, extra time involved to install this bulky (though ultra-reliable) equipment has not been included in the running total of time taken' mentioned hereafter.

The fuselage is basically a simple box, to which a keel is added top and bottom to give it more shape and character. No formers are used aft of the wing seat - the full-length fuselage sides being glued either side of a balsa crutch and then sheeted on the bottom surface. This is very quick and easy, and must result in a straight fus - indeed, the basic fuselage, including the bottom keel and wing mounting blocks, plus servo tray rails (modified to accept the KP series), was completed in just 14 hours, before attention was switched to the wings.

In typical Topflite fashion, the wing was 'self-jigging' insofar as the ribs had tabs added to the top of the leading edge, enabling the wing to be built flat on the board, inverted. The secret of the speedy construction here is a structure made up of relatively few, substantially proportioned components cut exactly to size. For instance, the leading and trailing edges are enormous by 'normal' standards and there are a minimum of wing ribs - all in 3/16 in balsa. The result of all this is a tough wing which does not need leading edge sheeting, which can be built in just one hour and 50 minutes, including the servo mounts. The leading and trailing edge joins at the centre are firmly reinforced with bass blocks, while the hardwood land-ing gear stretches right across the centre section. Despite the lack of leading edge sheeting, the wing is very strong thanks to its massive leading edge and 1/4 x 4/3 in hard balsa spars.

Back to the fuselage, and the first problem arose over the fuel tank - which is not provided. The plan shows a suitable tank installation for the upright engined fuselage but not for the inverted. This situation was then complicated by the fact that I would need to install the power pack within the tank compartment, as the fuselage would be filled with the neat little tin boxes (referred to by the experts as receiver and servos, I believe) and then further problems arose as I prefer to have an accessible tank, yet dislike hatches. These snags were overcome by making a new former from 1/4 in ply then cutting a large hole in it to permit a Graupner rectangular tank to be inserted from the wing position - a system used on the Topflite Taurus (oz612). The power pack would be encased in foam rubber, then wrapped in polythene, lodging above the tank. This then gave access to all items which might need servicing at a future date. The tank was made up with a single vent and the fuel tubing to this and the feed pipe would then lead out through the front former - the whole 'mod' taking just an hour, and not included in the 'official' time schedule, as it was a deviation from the original.

This former and front former were then epoxied in position (using 5 min epoxy, of course), then the rear 'spine' was added - taking in all just over one hour. The fuselage aft of the cockpit is not intended to be sheeted, the Monokote covering envisaged to be used, providing the 'shape'. As this plastic film was not to my choosing, 1/16 in balsa was used to 'triangulate' the top decking..." 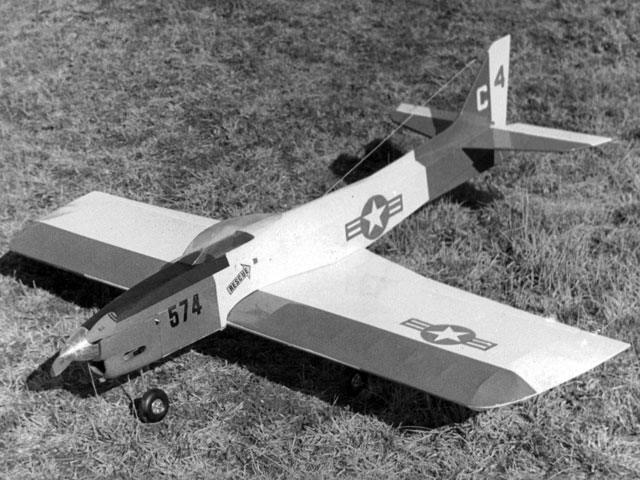