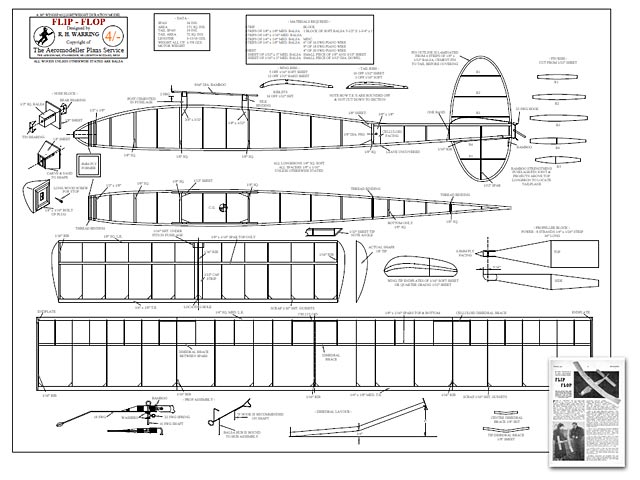 Quote: "Prior to Flip-Flop the last lightweight built by the writer was in 1945. This was really a 'medium weight' model rather than a true lightweight and the immediate forerunner of the Zombie (oz7812) Wakefield design. The era of this type of 'heavy' lightweight was past, however. With freewheeling propeller and long, slow climb they were perhaps, more consistent than the orthodox post-war lightweights, but had a noticeably higher sinking speed on the glide.

Flip-Flop was built in late 1950. Since then it has had various outings, none in competitions, and undergone one or two developments. The design layout has been largely influenced by two particular post-war models, fellow club member Bill Geddie's Tiercel (oz10002) - an FAI rubber model - and Roy Yeabsley's Gee Bee (oz5421) which won the 1950 Bill White Cup. It includes a number of the best design features of these two models, with the addition of some further ideas.

One of the main differences between Flip-Flop and its contemporaries is that it has a very long power run - eighty to ninety seconds on full turns. Initial climb is quite fast, after which Flip-Flop plods along in a steady climb for almost the whole of the power run, reaching a very good height. Normal duration should he in the region of 3-1/4 to 3-1/2 minutes without benefit of rising air currents. For must of the power run the propeller appears to flop around, generating just that extra amount of thrust necessary to take the model upwards.

Power trim is obtained by adjusting sidethrust to give a reasonable right-hand circle. No down-thrust should be needed, provided the model balances where shown on the plan. Adjust the wing fore and alt for glide trim if necessary.

On the glide, with propeller folded, the model should then fly straight. The ideal trim is to have a left-hand circle on. the glide and this is achieved by sticking a length of in. square balsa under the trailing edge of the port wing, just outboard of the tip dihedral joint..."

Quote: "Ron Warring's lightweight rubber model, the Flip Flop. The designer should need no introduction, especially in UK where he was a guru for many a long year - on the level with Vic Smeed and Phil Smith. One thing you could guarantee with their designs - they would fly and fly well. No more need be said about this design - it will go! As always when building with my drawings please take care and measure before cutting." 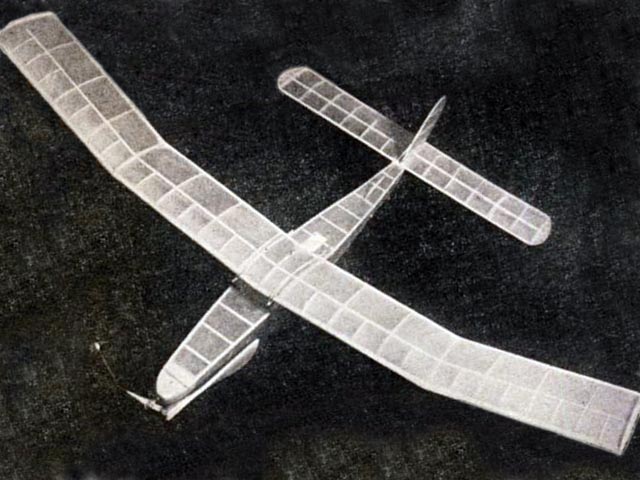