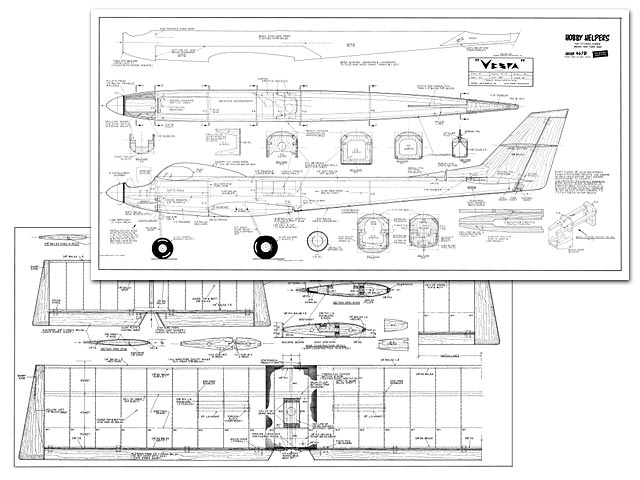 Quote: "Designed to fly crisply through both AMA and FAI patterns, this well proved design represents a unique balance of size, speed, power and performance in one trim little package. It is a thoroughly engineered project for 60 power. Vespa by Dario Brisighella

The model presented here has evolved from. prototypes which started with the idea of developing a smaller sized contest ship capable of performing not only the AMA pattern but also the FAI maneuvers which I prefer doing. The stability and grooveness required for this type of performance were to have one primary basis, speed.

The original test bed for this theory was constructed to achieve speed first and performance later. An appropriate name for the first prototype (on a bare 580 sq in of wing area) should have been Skyrocket I, not Vespa I. The first flights were something to behold. This 'spacecraft' had the ability (due to its speed) to be directed at most any attitude and maintain its heading and pitch until out of sight undaunted by wind direction or speed. Axial rolls appeared to be done as though on a string. Loops could be imposed one over the other with little or no correction required. In fact, its ability to do most maneuvers was quite amazing considering its size.

I was convinced that, if this speed could be maintained - or close to it with refinements - I could accomplish my original intentions. OK, it behaved like a streamline anvil with anything less than half throttle; as an example, landing approaches appeared to be full powered low passes which were abruptly aborted as the ship touched down on the runway.

While design work began on Vespa II, the little spacecraft was kept flying to conduct more experiments and to close the season. November and December were spent constructing Vespa with many refinements throughout, and always maintaining one thought, retain this higher flying speed. I felt then, and now more so, why have a model 'lugging' through maneuvers when with higher performance you can 'fly' through them. Wing area was increased, airfoiled tail group was added, frontal area was reduced considerably, mainly due to the compactness of my Micro Avionic radio equipment and the availability of a slimline fuel tank.

Vespa II really took shape, and towards completion one thing plagued me: with the reduction in frontal area I now had this very large cylinder of my Enya .60 projecting above the fuselage. Trying many ideas, the final result is the present canopy location which not only detracts attention from the cylinder head, but also smooths the air flow around it. It now has become Vespa's trademark.

The month of January is not quite suited to test flying around Milwaukee, and I had to know how Vespa II would perform, so with Skyrocket I and Vespa II packed neatly into the trunk, we were off to the land of sunshine. After a few 'orbits', hanging onto the controls of Skyrocket I, my thumbs were limbered up, reactions sharpened, I readied Vespa II. From a coral beach of Key West, Florida, Vespa II began to prove its worthiness. Most of the speed was main-tained along with the grooveness of #1. The maneuvers which Vespa I lagged on, Vespa II did with ease, and now landings again looked liked landings, not like controlled crashes as with its predecessor. Not only was the construc-tion of both ships justified, but it also rounded out a long awaited vacation.

Vespa II and the more sophisticated number III made their formal debuts at the 1966 Toledo Conference and Nats, at Glenview respectively with all the little details worked out. Here then is Vespa, series designation no longer required, as I feel it is no longer in the prototype stages, but rather a highbred with a balance of size, speed, power, and performance in one trim little package.

I do not recommend that anyone at-tempt to fly it with reed equipment, even though someone may find a way to cram all the equipment in. I owe most of the compactness, of course, to the Micro Avionics equipment I use..."

Quote: "This is the Vespa pattern model designed by the late Dario Brisighella Sr. and published in American Aircraft Modeller in 1967. The photos show my Vespa, built in 2000. It has an ancient Webra .61 Speed engine, Futaba 6AXs RC system, covered with MonoKote and weighing about 5.5 pounds. It is a beautiful flyer. Stable, fast and very acrobatic! At our elevation of 2.650 meters above sea level, it moves really fast. But my old Webra is a powerhouse! The girl is a friend of mine who is learning to fly Her name is Sandra and is very enthusiastic about aeromodelling! Build light and enjoy!"

Article, thanks to RFJ, Circlip. 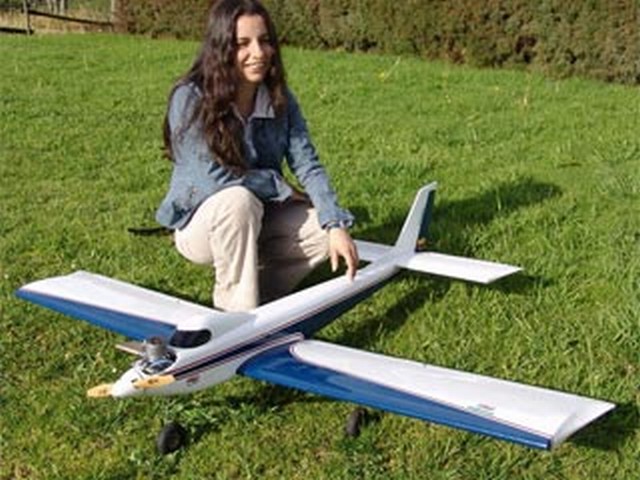