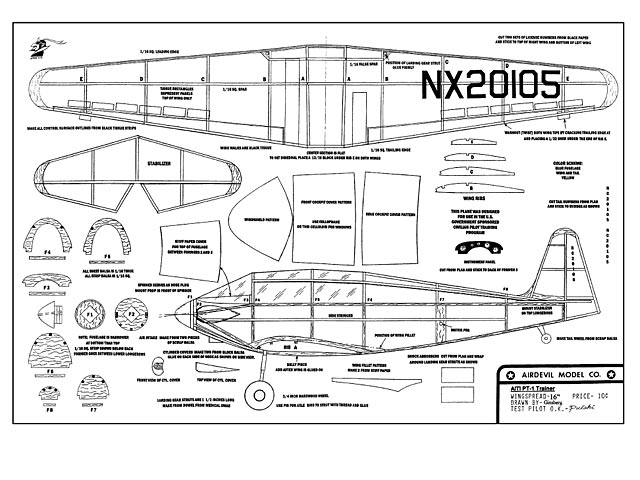 AITI PT-1 is scale, not just sport: According to the blurb by Dave Stott, which appears in the same issue of FAC News (249-175 S/O 2009), this is a scale job. I'll email you a copy of that page. Supposedly, an advertisement with a 3 view and a photo of an earlier version appeared on the back cover of Air Trails, Jan. 1941 I am not sure if there is any connection, but this trainer looks quite a bit like a Piper aircraft also called the PT-1, shown here: http://www.aerofiles.com/pip-pt1proto.jpg http://www.airport-data.com/aircraft/photo/090146.html The Piper aircraft, apparently, still exists.
LincolnRoss - 17/11/2012
Thanks to LincolnRoss, here is the article text from FAC, scanned and OCRd. - PSEUDO TEN CENT AERO I.T.I. PILOT TRAINER By Dave Stott. ...Roosevelt commanded Army Air Corp Chief, General Hap Arnold, to set up a program to provide pilot training to 20,000 men a year to man the fighters and bombers soon to be pouring out of U.S. Defense Plants. Thus, the Civilian Pilot Training Program was begun. Now, you cannot train pilots without training planes: so many small aircraft companies, some of which were founded for just this purpose, started to design and build prototype training craft. Aviation schools also joined in with designs created by the instructors, Prototypes of these trainers were being built in the school shops by the students. It was patriotic and inspiring work which was instructive as well. Aero Industries Training Institute (Aero I.T.I.) of Los Angeles was a government approved aviation school, so this was right down their runway. The outside back cover on Air Trails magazine for January, 1941 has an Aero I.T.I advertisement with a 3-view of their training plane, the PT-1, and a photo of the open cockpit prototype. She was a unique low winger possessing pleasing lines. What more could a modeler ask for? The result is the Airdevil Model Company plan presented here. The model buiit from this plan is powered by a 12 inch loop of 3/32 Tan II rubber turning a prop carved from a 1/2 X % X 4 V, inch baisa block The blank cut from this block was the Earl Stahi type. (Consult any of Earl's plans for the layout and proportions) A 3/32 diameter balf of clay on the end of the fuselage was required for balance, so a plastic prop is not advised. The all up flying weight of the model as described is 11.4 grams. The model required 7 degrees of down thrust, and 4 degrees of right thrust for stable flight. The best flight path is left under power, and right in the glide. Be sure to wash out the wing tips as indicated on the plan. This makes flight trimm
SteveWMD - 18/11/2012
Add a comment