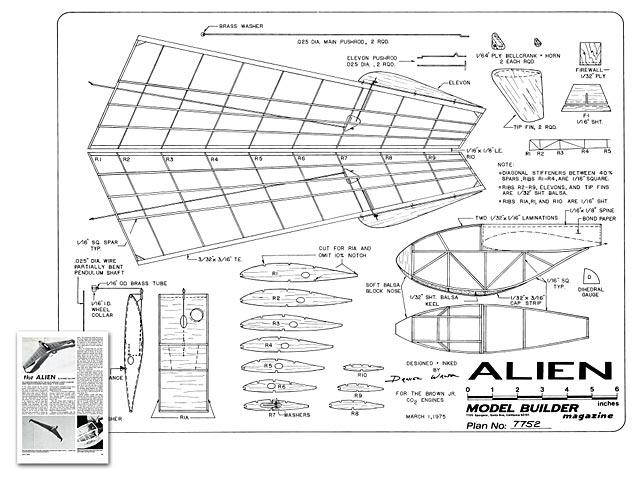 Quote: "An interesting experiment in the use of pendulum control to maintain stable flight in a somewhat tricky design. A total success! The Alien, by Daniel Walton.

The initial concept for the control system incorporated in the Alien was the result of a term paper. The system's purpose is to correct for the tendency of higher aspect ratio types of tailless aircraft toward spiral instability. Although two years lapsed between the term paper and the construction of the Alien, it was always felt the concept was viable if the mechanism could be kept light enough. Since none of the stock items available were acceptable, the system must be custom made. It may seem to be a time consuming extra to make, but if done well, it works like a champ. When flying, it can be upset by some fairly stiff gusts and correction is almost immediate. Pattern is a wide gentle left climb and glide, and flights average about one minute on a full liquid charge.

CONSTRUCTION: The keynote of this ship is simplicity, because a simple plane is usually a light one. The Alien is no exception, with a total finished weight of 1.3 ounces, trimmed and flying - so when building, keep it light.

The only things which should be of stiff, hard balsa are the LE, 40% spars, keel, and main longerons of pod. These really take a beating, especially the keel area. Pod is basic box type, although you may wish to sheet the bottom (1/32 sheet) for added durability.

Because of this simplicity, only the pendulum movement will be elaborated upon. The mechanism itself must be as free from friction and binding elements as possible. Otherwise, more weight will be required on the pendulum. Here is one of those rare cases where it pays to have a little slop in a system rather than a tight fit.

Start by constructing the two bell-cranks from 1/64 plywood and 1/16 dia aluminum tube, as shown on the plan. Tubing should be secured with epoxy, being careful not to get epoxy in the tubing. Make sure the axis of the tube is perpendicular to the plane of the bel crank. While this is curing, form all of the wire parts. Tails on the Z bends which go into bellcrank should be rather long so as not to hang up on slot in R-7. The washers on main push rods are affixed with silver solder; also note the bend, which is important.

When the bellcranks have cured, attach them, along with washers, to R-7 as shown on plan, being careful with the glue. They must move very freely and success or failure is very dependent upon this operation. Once the glue is dry, the outer wing panels may be built in the normal manner, starting with R-7 push-rods attached to bellcranks. Then slide each rib on over the rod, like a control line model. Also make sure R-1 is jigged for dihedral, using template D. Wash-out is automatic because of the tapered wing, just pin it 3/16 off board all the way along T.E.

Center section is built over plans, removed and then sheeted on top side only. Now glue on front support and cut out pendulum shaft hole. Next add front and rear 1/16 dia. aluminum tube bearings to assembly using epoxy, again being careful not to get epoxy in tubing. At this point, insertion of a piece of straight .025 piano wire will aid greatly in maintaining alignment during cure. Allow this assembly to cure at least five hours..." 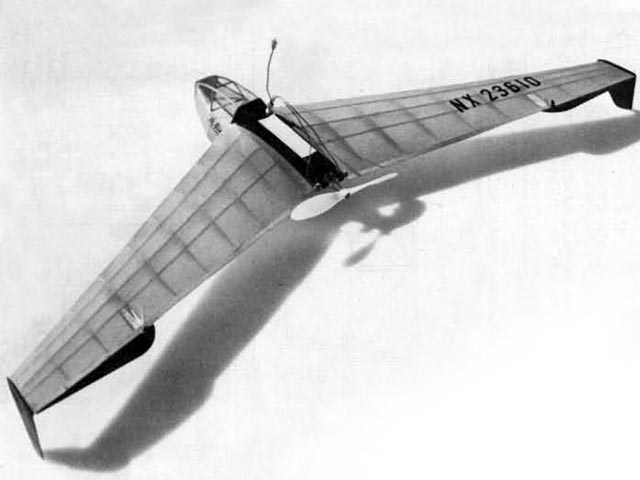