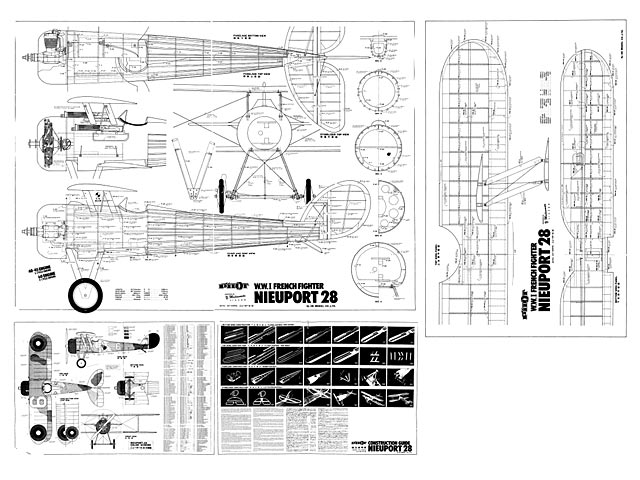 THE NIEUPORT 28 (correct designation N28C-1) is probably one of the lesser known aeroplanes of the first world war. It has also the distinction of being one of the most unique in that it was the first fighting aeroplane to carry the American colours into combat.

Open the box: The model comes in a colourfully decorated, substantial box which, when opened, reveals the anticipated mass of component parts. Unfortunately, even at this early stage, my belief in Pilot kits excellent reputation was slightly shaken. On checking the die cut wooden parts it was found that only half of the ply parts had been cleanly cut and part numbered. The other half had only been sufficiently cut to see the outline. With no markings, and as this particular sheet contained a number of fuselage formers and is approximately three feet long, obviously a fair amount of fretting was required. Fortunately the balsa components did not require the same amount of work, all being easily freed by hand or by gentle application of the balsa knife.

Checking through the rest of the kit reveals an absolute mass of hardware for all the linkages, fixings, bracings etc, two large sheets of plans, scale detail sheet, plus component list and pictorial instructions, two excellent sheets of self-adhesive decals, plus the remainder of the wooden components and very few plastic ones.

Wing construction: After some considerable time studying the plans, plus the instructions, I can only comment that they are not totally explicit. Before any assembly work was started a phone call to Irvine Engines, the importers for Pilot kits was made to see if clarificaiton of any of my queries could be obtained.

This was not to be however, as they were equally at a loss and suggested I carry on a I thought best i which is what I have done. The main reason for my query was with respect to construction of the underside of the wings. Should the leading edges be of box construction or, as half suggested on the plans, only sheeted on the top surface? The drawing whether viewed as a plan view or as cross section, seems to contradict itself.

I eventually decided that the plans had been drawn incorrectly, added some more sheet balsa from my own collection, and completed the wings with a full 'D' box section. However, in retrospect, having now seen some more scale detail, the full size machine only had top sheeting (with the ribs being seen on the underside right up to the leading edge). This would produce difficulties if built this way as it would mean starting construction with the lower rib cap strips in place - if you wish to keep everything flat and true.

Having now committed myself to a way of building, the rest of the wing construction was quite easy.

Formers and stringers: Fuselage construction is started with the front five formers being assembled with the cabane strut mounts, keels and landing gear mounts. This is done using a snap together technique in the hand which is surprisingly strong, even without glueing.

Next stage in the fuselage construction is to fit all of the stringers to the rear of the fuselage. This, on the review kit, proved far more difficult that anticipated. A trial fit of the first stringer ended up with it shaped more like the proverbial donkey's hind leg. On checking the rest of the slots in the formers all were found to be similarly misaligned. This resulted in a lot of recutting of slots and filling the remaining gaps. Prior to assembly I did check all formers against the plan outlines for any specific orientation - if there is any it certainly was not apparent, with all stringer spacing appearing equidistant.

With all stringers finally in place, and the whole assembly thoroughly dry, the front part of the fuselage was then covered with 7/64 in sheeting. Provided the sheeting was adequately clamped prior to bending to shape, no problems were encountered.

When satisfied with the contoured shape, holes may be cut in the sheeting for the cockpit and the fitting of the cabane struts. Keel members that cross the cockpit opening and the lower wing mounting position, should be cut away and removed... " 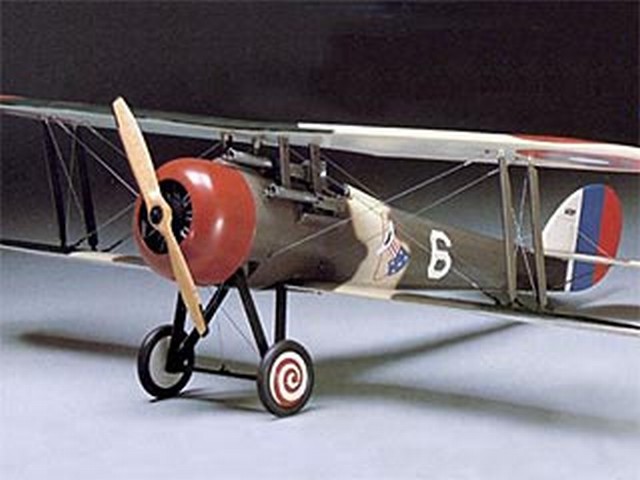