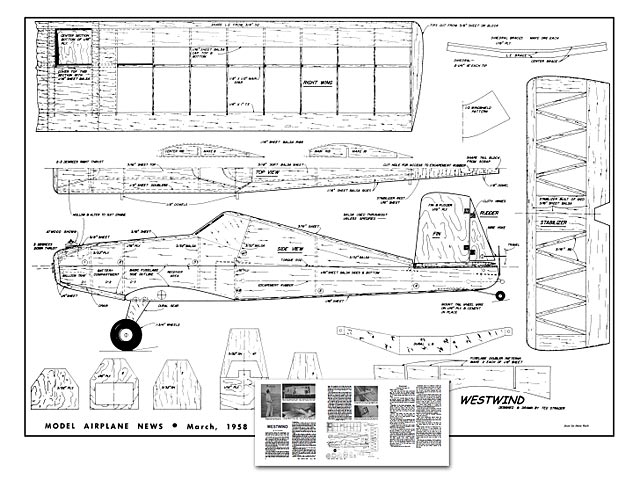 Quote: "Small models seldom fly realistically. One that does, and in wind, is this .049 powered job. It's as cute as a bug in the rug. Westwind, by Ted Strader.

It's the general rule in RC to follow rather established lines to get the most satisfaction and success out of the hobby. Adherence to this theory has resulted in a majority of the fraternity flying high-wing type aircraft.

We must admit to agreeing many times with the unproved theory that low-wing configurations just couldn't cut the mustard because they would be too tricky; too unstable; or too something else. Then we decided to design a low wing and utilize some of this unstable characteristic with an eye toward stunt.

That's where something went wrong. We got a plane that would stunt but the Westwind turned out to be as stable as a table and has put to shame some of our solid-as-a-rock high-wing models.

The main drawback with this model is the limited receiver space. However, a great many of the available small commercial receivers and plastic boxed kit receivers will fit with ample room to spare. Our CG Electronics RT-1 gives us more than enough elbow room, even with a good-sized wrapping of protective sponge rubber. Bulkhead 3 keeps the receiver from wandering back to disturb the escapement.

There is plenty of battery room for any receiver that will fit, even if you fly proportional control. By using both the battery compartment behind the firewall and the center .section of the wing we have installed as many as 11 pen cells and two Burgess U15 22-1/2 Volt 'B' batteries.

The original model weighed 20 ounces, resulting in a wing loading of 13 ounces per square foot which is quite light for an RC model (at least for one of ours). It responds immediately and recovers like a high wing. The glide is flat and not too fast which makes for rather soft landings.

Before we begin outlining the construction, it must be admitted here that the original has had five of the most spectacular crashes we have ever seen. All were the result of either battery failure or pilot error (this flying at dusk can get hazardous!). Not one crash has been the result of the plane stalling or failing to recover. But what has been even more gratifying is that the plane is still flying. The only damage in that time has been one firewall which was split when a friend was running for a hand launch and stepped in a chuck hole. POW! The plane was flying the next day. The friend may never be the same!

Construction should offer no real problems. Except for the ribs and tips it's pretty much of a straight line proposition. Cutting out all parts will save a lot of time before actual construction is begun. Shall we?

FUSELAGE: Once both basic fuselage sides are cut and checked for similarity, cement the doublers in place. Cut along bulkhead 4B location on the inside and crack slightly before any bulkheads are installed. Later when bulkhead 4B is cemented in place this will be as strong as any other part. Cement bulkheads 2 and 3 in place and check for alignment. Once dry the basic framework can be completed with the addition of firewall and other bulkheads

The escapement may be added later provided mounting holes have been provided before bulkhead 4B is installed. It may be well to have the torque rod all bent and install it as you install bulkheads 4B, 5, 6 and the tail block.

The correct angle to install 4T can be arrived at by pinning a straight piece to the tops of bulkheads 5 and 6 and bringing 4T into line until it touches. Once dry the back deck 1/16 sheet can be cemented in place, along with the forward angled side sheeting. When dry, sand until the 3/16 sheet top pieces will fit the sides and bulkheads flush. The cockpit top can either be an elongation of the back deck top or a separate piece installed later.

Once satisfied with the escapement or actuator picture, the rear bottom 1/16 sheeting can be cut and cemented. The tail wheel mounted to a piece of plywood and cemented in place and installation of the stabilizer rest of 1/16 balsa wraps up fuselage construction for a while.

WINGS: The most important consideration here is the selection of a good grade of fairly hard balsa. Construction follows the general procedure and has proven very strong and warp resistant. Construct both panels and the center section with the exception of adding the
top capping to the main panels; the root section top and bottom capping and the center section top capping.

It is advisable to use plywood for the bottom of the center section, even if this opening is not used for battery space, because this provides a good mounting to bolt the landing gear to..."

Quote "My father built one in the mid 60's and it flew well. I have never been able to find the plans so that I could build another one for I was looking from 1960 to 1965. 50+airyears posted a reprint from VCRC late June or early July. Thank you 50+airyears for I never thought to search in the 50's."

Quote: "The article does not state the wing span so I was going on what others had said when I scaled the scan. This morning I rescaled the wing to exactly a 6in chord and 2in rib spacing (in cad) and then all of the call outs then matched the scan. This results in exactly a 38in wing span. Even the main wheels scale within a couple of thousands." 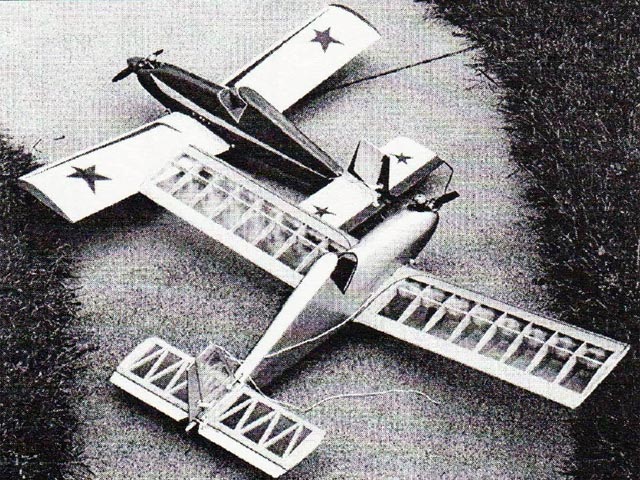