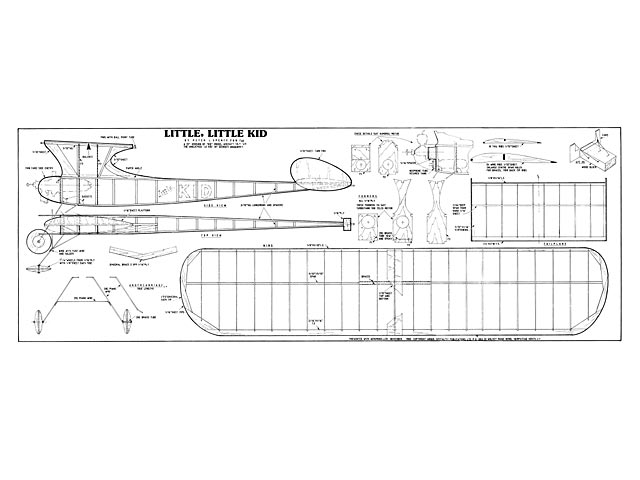 THE ORIGINAL design, by Frenchman M Georges Bougueret, was a 111 cm span, parallel-chord and twin-finned pylon model powered by a Guerpont compression ignition motor of 2.8 cc. It was christened Le Kid. The model was very successful in the Ratio comp-etitions held in Occupied France, and is credited with wins in 1941 and 42 with a best effort of 6 min 27 seconds from a sixteen-second engine run - a ratio of 24:1. This earned the title of 'Le Moto D'un Grand Champion'. Le Kid was competitive for a number of years, later gaining a second place in Paris in 1945.

Imperialism: The model burst onto the British scene in the July '47 issue of Model Aircraft - the then Journal of the SMAE - in the guise of a 44 in wingspan Kid, anglicised to suit the Mills 1.3cc diesel and our Imperial balsawood sizes. The wings, rear fuselage and tail unit were, except for the wing tips, essentially the same as the original design but the front fuselage had been changed in many respects. The first version's pylon featured an all-sheet keel with a single former down onto the fuselage, but this was lightened for the English-published Kid with a built-up structure, and two formers keying into the fuselage. The UC legs were raked differently and the wheel design was changed from a round section to stream-line profiles. The bottom longeron and adjacent structure was also simplified for the 'Imperial Kid'.

Variations on the theme: I have produced Kids not only in the standard 44 in versions, but also at 66 in, 22 in, 11 in, and 3.7 in, (1/12th full size) - the latter being a non-flying mantelpiece model. The engines used in the flying variants have been Mills Mk.1 and ED Mk.2 in the 44 in models, and an AM25 in the scaled-up version. The 22 in Little Kid, the subject of this plan, has both a Humbrol CO2 and a Telco Turbo 3000 installed, whilst the 11 in Baby Kid is powered, literally, by an elastic band!

Build your Kid: The first items to make are formers F1 and F2; these require the u/c tubes to be bound and epoxied. Fuselage sides are made in the usual way. It may be found easier to handle the short spacers with a pair of tweezers. F3 can now be cut out. When the sides have been separated they can be attached to F2 and F3. Allow to dry before adding the cross-pieces. Make the pylon parts, add Fl and build up the pylon, trueing it up with the 3/32in. sq. along the top. The wing platform is added last, ensuring it is angled to suit the dihedral by using a dihedral brace as a template.

Cut out all the wing ribs taking care with the spar slot - this being an unusual feature of the wing construction. Set the notched TE over the plan of one wing panel and thread the required number of ribs onto a spar. A couple of strong straight pins are pushed into the building board at each end of a wing panel spar, and with a blob of PVA at each rib notch, the ribs are positioned. With the spar located between the end-stop pins the ribs are spaced out parallel with each other and a bead of PVA applied at each rib/spar juncture, except at the root as these ribs will be glued in conjunction with the dihedral braces. Fit the LE and build up the segmented tip. Repeat for the other wing panel.

The panels may be joined by chamfering the ends of the LE spars and TE to suit the dihedral and thread-ing the braces through the root ribs. These can be held in place with paper-clips whilst the glue dries, preferably overnight. The centre section is covered with sanded-down 1/32in. sheet, steamed to assist bending. A more traditional method of wing construction would be to use top and bottom spars but it wouldn't be in the spirit of re-creating a vintage design, albeit a scaled down version.

Tail and undercarriage: After the wing, the tail is simple but care must be taken to keep the structure true by lightly weighting down whilst drying. Don't omit the 1/8 x 1/16 strips inboard of the tip ribs as these stop the ribs bowing and provide a flat surface for the fins which are glued on after covering.

With the undercarriage wires cut to true lengths and approximate angles, obtain a length of softwood, trim about 3 in down to the width of the fuselage and drill undersize holes at the same centres as required for the model. This jig is used to adjust the angles and also to hold the wires whilst binding with fine wire and soldering. I find this method far easier than using the inverted model as a jig.

Motor installation: The Telco T3000 installation is straightforward but remember that the nozzle has to point away from the pylon for charging operations. For other units it may be necessary to mount the motor on a block as shown for the Humbrol. Note that this type of tank has a neoprene split collar around its neck to hold it through Fl by friction. See also the paragraph at the end of this feature.

The classic 40's streamlined wheel: The wheels are laminated from 1-1/2 in
squares of 1/8 sheet each side of a 1/16 ply core with brass tube inserts. The laminations are glued up with PVA and left overnight, under weights, to dry. The hole for the axle tube is drilled as true as possible and slightly undersize. Lightly countersink the balsa faces and press the tube, with a smear of epoxy on it, into the hole. Fill the countersunk areas with a fine bead of epoxy, rotating the tube with the tang of a Swiss file as a mandrel. Allow to harden.

The next stage involves a bench disc sander. After marking a 1-1/4 in circle on the wheel blanks, rough off the corners almost down to this line. Using a short length of 22 swg wire, drill a hole half an inch from the end of the softwood and tap in a one-inch length of 20 swg piano wire. With a wheel blank on this spigot gently offer this assembly to the sander and rotate the blank with the fingers to sand down to the 1-1/4 in dia line to produce the wheel discs.

To form the streamlined section, a cup washer is soldered two inches along a 12 inch length of 20 swg wire and the circular blank slipped on, followed by a two-inch piece of 20 swg tubing. This tube held in the left hand, forces the blank against the cup washer. The wire is held in the right hand. Offer up the disc to the sander but near to its periphery and gently sand off one face at a time allowing the sander to rotate the wheel, with the left hand controlling the rotational friction and the wire in the right hand acting as a radius rod. Try to obtain a curving profile between the ply core and the axle tube. Repeat for the other wheel faces. Two coats of thinned clear polyurethane completes the wheels. Nifty, n'est pas?

Paper and pylons: Covering is easy, except for the pylon - always the problem area for me regardless of the size of Kid. I resolved it by glueing paper angles at the fuselage/pylon junctions and thus covering each bay in individual pieces of tissue, working forwards. Both surfaces of the wing, tailplane and fin are covered. The fuselage side-panels are two laminations of writing paper glued with PVA. Dope with a 50/50 dope/ thinners mix - two coats on the fuselage and wings, and one on the tailplane and fins. Pin the wing panels and tailplane down to a true surface and sandwich the fins between two pieces of glass or rigid plastic. The original plan from the 40's sported the models name in large capitals as shown and it would be nice to perpetuate this feature as well as the style of construction. The characters I used for 'Little' were from pressure sensitive WHS No.19 Series 2 type.

Flying: Check the balance where shown on the plan. Hand launch trimming for glide can be carried out in a hall - if calm weather is not forthcoming - using 1/32 sheet and/or thin card for packing. The power/glide trim is right/right with a pleasing climbing turn followed by a gentle transition to the glide mode as the power dies.

Development: Although I haven't tried this power it is thought that the KP 01 free-flight elec-tric unit would fit into this design with little alteration to the formers or fuselage width. To improve performance by adding lightness (my Little Kid weighs just under 1.9 oz) the fuselage structure could be from 2mm square, the formers from lmm ply and the pylon from 2mm sheet with all the ribs cut from 1/40 sheet; but this would be above and beyond the original concept of producing a half-size replica." 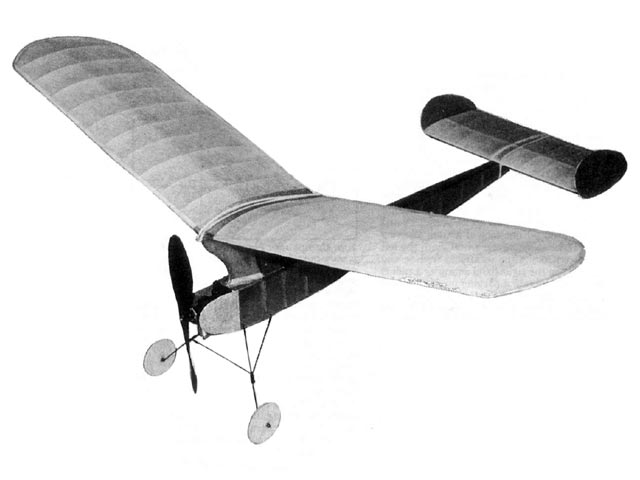