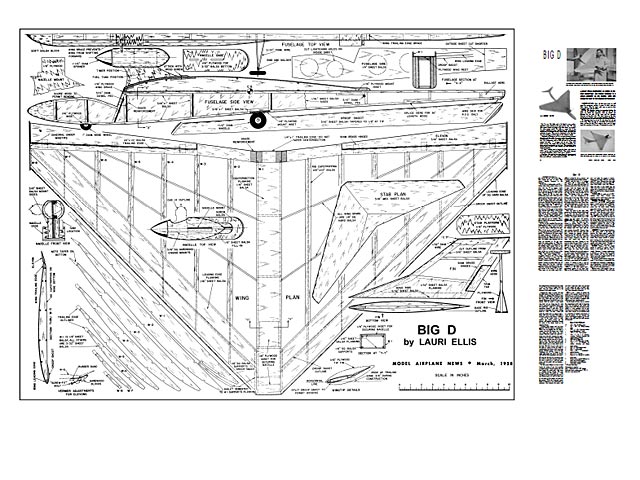 Quote: "A many times contributor on deltas to foreign magazines, the author-designer is a noted authority on the subject. With this design he shot for the highest performance. Big D, by Laurie Ellis.

Big D is my 21st delta and is the third to use a pylon-mounted engine located at the apex of the wing. We were after contest climb and glide in the delta shape, or to match the pylon contest model. The delta is a queer bird. It has amazing stability, is more reliable than the conventional model but it is difficult to get a glide which will equal the orthodox layouts. This may be attributed to the fact that the span-loading is higher than on the ordinary model.

Hundreds of flights on all the previous designs dictated the shape of this delta. It is not pretty but performance makes up for it! It takes any engine from a good .049 to the hot .15's. Performance with an .049 will only be of the sport variety but with a .15, it comes into its own. Even with higher power, this model will not spiral in providing one does not get ham-handed on the trim. The transition from power flight to glide is very smooth and stall recovery is rapid and positive.

A 'trike' landing gear is shown for those who want to ROG - not be used for contest flight. This model, because of its high thrustline, takes a long run to 'unstick.' For those who wish to get away from the conventional, this design is a good start. Experimenters, with ideas of their own will have a proven design to modify.

Construction. Trace all full sized parts on stiff paper for templates, making it easier to trace parts on balsa sheets. Rub the plans with wax or soap so that cemented parts will not adhere.

Wing. The fuselage cannot be completed before the wing. All rib patterns are given. Slots for the 1/8 sq spars are shown but remember, slots are slanted one direction for one side of the wing and the opposite direction on the other side. The slots shown on the plan are drawn as if there were no slant involved, therefore, it will be necessary to bevel each slot in the correct direction.

We found it best to cut out the rib shape but not put in the slots. When the ribs are assembled and cemented in place, we then lay the 1/8 sq spars in place, one at a time, mark the position of the spar..." 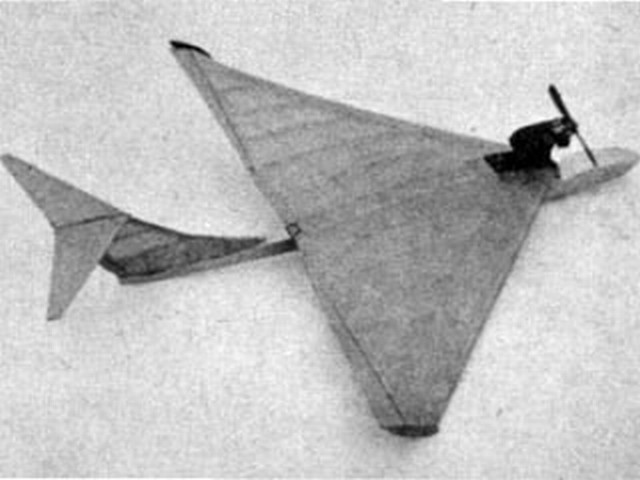