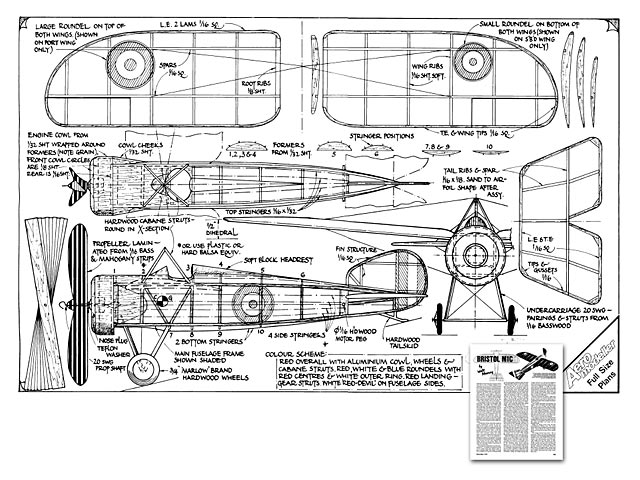 Quote: "FINDING A World War One airplane that is red and is not a Fokker triplane is a relatively rare occurence. Finding a Bristol M 1C with anything but a round cross sec-tion fuselage is a miracle. Both features in the same airplane turned my model building switch on. When I first saw the preservation profile in the August 1978 Aeroplane Monthly, I knew that I would have to build a model of Captain Harry Butler's Bristol M 1C as it is now preserved in Minlaton, South Australia. Before we go any further, take another look at the photo.

The propeller shown on the model was laminated from strips of mahogany and basswood, alternated. This looks great and works very well. Laminating a propeller is quite easy. Cut out nine strips, four of mahogany and five of basswood. Drill a 1/16in diameter hole in the centre of each one. Cut a short length of 1/16in diameter aluminium tube and thread the strips onto it, alternating the materials. Once you have a stack of strips on the tubing, you simply twist the stack to look like a rough propeller, and bond the layers together. Now carve the propeller to the shape you desire.

The structure of the rest of the model is pretty conventional, except for the outlines of the wings and the vertical tail. These were made by wrapping a piece of 1/16 square balsa around a form to get the smooth curve shown. (This is not the easiest way to do it, so, if you want, make them from standard sticks and sheet balsa.) To make a balsa stick bend around tight corners, it has to be softened. I soaked my sticks in household ammonia for about thirty minutes before I wrapped them around the form that matched the inside contour of the surface. Then I let them dry overnight before I used them to make the assembly.

The wings are assembled over the plan. A piece of 1/16 square is cemented on top of the outline along the leading edge to give a leading edge 1/8 in deep. The root rib is sanded to a quarter-rounded effect on the wing upper surface to give the wing the gulled effect shown in the front view.

The horizontal tail is built up directly over the plan. Use 1/16 square stock for the outline and 1/16 sheet to make the corner gussets. Select lightweight balsa for all the tail structure. The centre rib and the two intermediate ribs are made from 1/16 x 1/8 sticks set on edge over the plan. After the structure is dry, it is carefully sanded to the airfoil shown in the side view. (I do the upper curvature sanding before removing the structure from the plans because the structure is somewhat stronger with the plan backing it. Obviously, I don't cover the plans with waxed paper when building tails like this.)

The fuselage is a square box structure with the two sides built directly over the plans. It has a cross piece at the top and bottom of each upright. Formers, cut from sheet balsa, are added to the top and bot-tom of the box. The top of the fuselage to the back of the cockpit is covered with soft 1/32 sheet balsa. There are four side strin-gers on each side of the fuselage running from the cowl to the rear motor peg sup-port upright. There are four top stringers that run from the back of the cockpit to the same point on the fuselage, and there is one centre one on the top that runs clear back to the tail post. The bottom of the fuselage has two stringers that run from the landing gear back to the motor peg station. When all the stringers are in place, carefully sand them so they taper as they go toward the rear end. They should almost disappear at their rearmost point.

Make the engine cowl by cutting three circles out of sheet balsa to the size of the dotted circle in the front view, two from 1/8 sheet and one from 1/16 sheet. Cut a square hole out of one of the thick ones to fit the Williams Bros thrust bearing shown. Cut a 1-1/8 in diameter circle out of the other two. Cut two 9/16 in wide strips of 1/32 sheet, cross grain from a 3 in sheet and butt them together to make a 6in long strip with the grain going across the long dimension. Wrap this sheet around the circles and trim it to the correct length to just fit around. Laminate the two thick cir-cles into a single part, then cement all the cowl parts together to make the cowl. Sand the front of the cowl to the rounded shape shown, and cement the cowl to the front of the fuselage box. Now make the cowl cheeks and cement them in place over the side stringers. Carve the headrest from a piece of soft balsa.

Before covering the model, make sure all the structure is carefully sanded to the proper contour and has no odd bumps or snags that might make unsightly bumps in the covering.

This model should be covered with red tissue. When the tissue has been shrunk with a fine mist of water and has dried, give it two coats of thin clear dope. Finding the proper sized insignia may prove to be your most difficult challenge. I obtained some clear decal material from an art supplier and made my own; this way, if you slop the paint around on a clear decal, you don't have to recover the airplane.

The engine cowl and the cabane struts are painted with aluminium dope. Dummy cylinders can be added inside the front of the cowl. Cylinders and tyres can be painted black.

Make the flying wires from 2 lb test monofilament fishing line. The wires below the wing are parallel and are double wires. Those above the wing are single wires and meet at the top of the cabane struts. The wings should have about 1/8 in of washout. That is, the trailing edge should be higher than the leading edge at the tips, relative to the roots. With the structure as drawn, they will probably warp this way. Just make sure it's the same in both wings.

A loop of 1/8 in rubber powers this model nicely. My best time has been 35 seconds, with most flights being a little shorter. However, the model shown is fairly heavy; it weighs 3/4 oz. I know most of you guys out there can build it for half that weight, and yours will outfly mine! Have fun."

Quote: "This is the Harry Butler WW1 Bristol M 1C. It was used mainly in the Middle East as an advanced trainer but also operationally in Mesopotamia with 72 Squadron and 150 Squadron in Salonika. Designed and first flown in 1917 it had a then excellent speed of 130 mph but did not fight on the Western Front. Some at the time thought it’s landing speed was too high making it unsuitable for France." 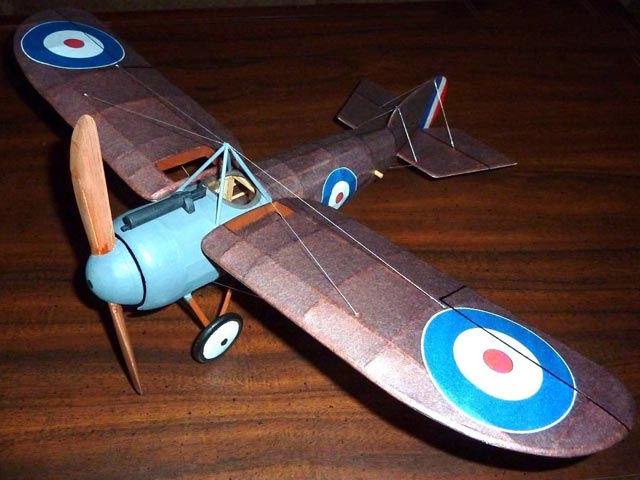