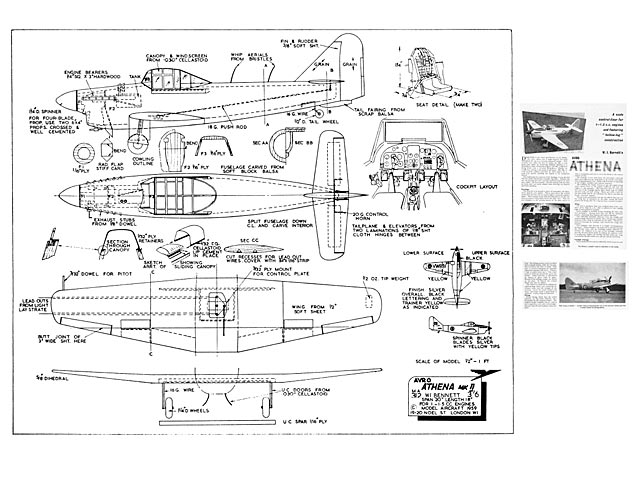 DESIGNED to the same specification as the Balliol, the Avro Athena was a single-engined low-wing monoplane for use as a two-seat advanced trainer. Two versions were built, the first of which, the Mk.1, was fitted with either an Armstrong Siddeley Mamba or a Rolls-Royce Dart turbo-prop engine. The Mk.2 followed being fitted with a de-rated Rolls-Royce Merlin 35 (1,280 hp) giving a top speed of 258 knots. The Mk.2, with its deep radiator, provides an ideal subject for a scale model, enabling the engine to be completely buried.

On examining the contours of the fuselage, it was decided that the model should have a hollow log body. Friends who saw the fuselage just after carving expressed surprise at what they called 'all that trouble,' but the carving took less than an hour, and was much simpler than drawing out formers and then planking.

Fuselage. The first job is to acquire a piece of reasonably soft balsa, 16 in long by 3 in square. This is sawn down the vertical centre-line and then the two halves lightly cemented together again. After tracing on the side elevation this is cut out, the same procedure being followed for the plan view. Now cut out templates to the sections shown on the plan, and it is then a straightforward job to carve the block to the correct out line section.

The fuselage is now split down the previously cemented joint, and hollowed out until there is an overall wall thickness of approximately 1/4 in. There will, of course, be openings at the cockpit, tailplane and radiator positions.

After drilling the engine bearers to suit the engine being used, cement these to the engine bulkhead, and bolt the engine to this assembly. The unit may now be cemented into one of the fuselage halves, after which may be added the fuel tank and fuel tubing..." 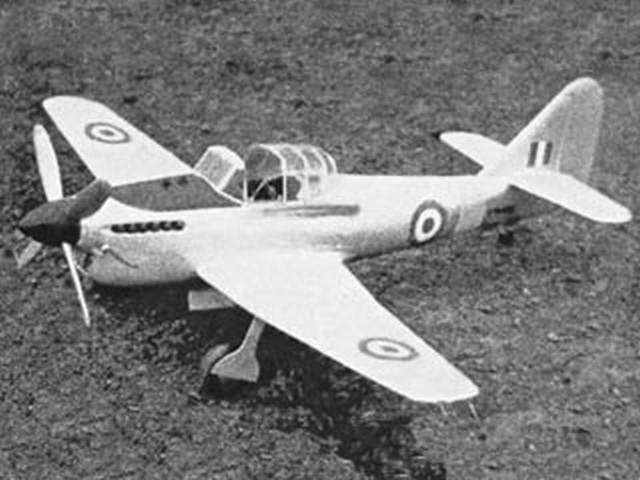