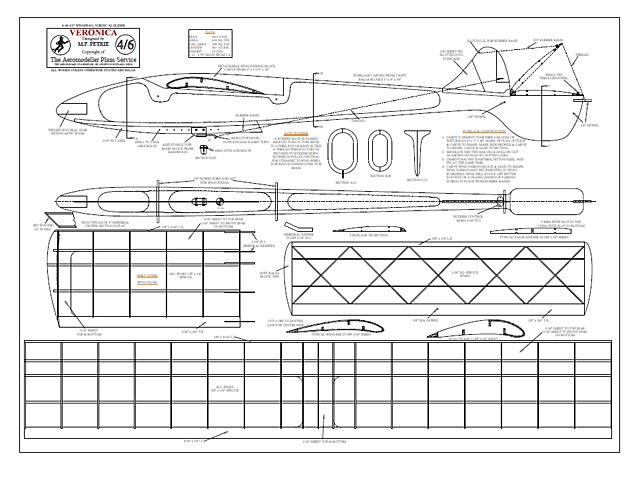 Quote: "DESIGNED as a 'toughie' to stand up to British weather conditions, Veronica is as ladylike as her name; but one of the roaming kind. On her very first airing, with a trial tow on only 100 ft of line, she decided to wander from the flying field and was finally recovered six miles away. After a repeat of that same performance on the second test, Maurice Petrie decided it was high time to temper the roving instincts of his nomadic model, and fitted a tip-up tail dethermaliser. Then club-mate HLG Campbell-Kelly tried a duplicate version for hand-launched slope soaring, and after a steady run of two to three minute flights, established the new British record for H/L Open and A/2 on July 29th, 1951, with a super flight lasting 24 minutes, 30 seconds. With its hollow-log type of fuselage, carved from block balsa, this tough soarer is one of the kind that last until lost.

Construction. The Fuselage. Two blocks of soft balsa 4 x 1 x 36 inches are cemented together lightly enough to enable the composite block to be carved to the outline in one piece. The two halves are then carefully separated and hollowed out with small gouges as shown, to a 1/4 in wall thickness. Halves can now be cemented firmly together, fitting into their appropriate positions the 1/16 in ply keel former, and the 1/8 in balsa sheet fin..."

Quote: "Veronica was designed by M. Petrie to the A2 specification with the additional ability to withstand the 'British' weather. Mind you with the last two summers we have had over here I think even Veronica would have been hard pushed. A copy of the original was even used for free flight slope soaring. Now that is something I've never attempted, with rado yes, but free flight no. She must be able to really hold trim then to be able to set a British Record of 24.5 minutes. Once more if you decide to build from my renditions please take care and measure well before cutting." This is a modern redrawn plan in PDFvector format. 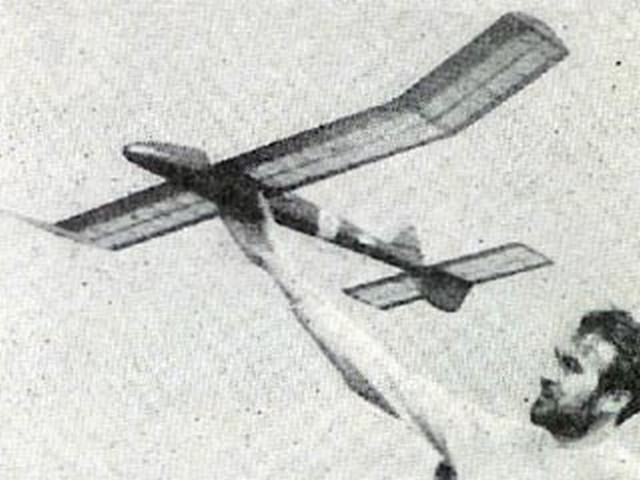