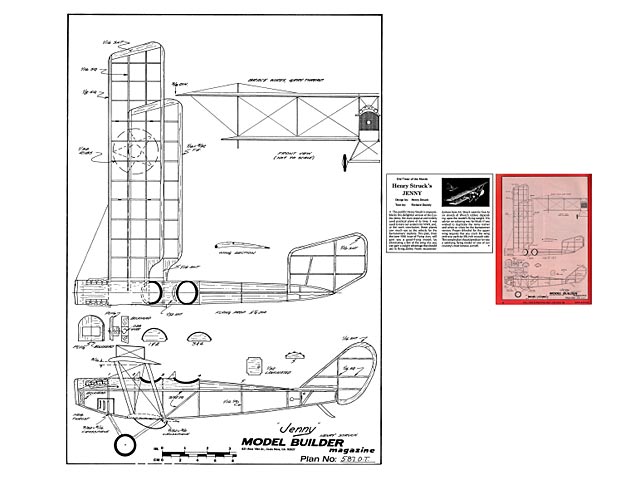 The Henry Struck Curtiss Jenny plan was first published in June 1938 Flying Aces. This here is a reprint in MB, May 1987.

The prolific Henry Struck is responsible for this delightful version of the Curtiss Jenny, the most popular and widely used practical plane of its time. It was used to train our aviators for WWI, and, at the war's conclusion, these planes saw much use as the vehicle for the barnstormers' exploits.

This plan, from the June 1938 issue of Flying Aces, will give you a good-flying model; by eliminating a few of the wing ribs you can gain a weight advantage that should aid its flying ability.

Power recommendations from Mr Struck were for four to six strands of 1/8-inch ruby, depend-ing upon the model's flying weight. His advice on coloring was for khaki if you wished to duplicate the Army trainer and white or silver for the barnstormer version.

Proper dihedral for the upper wing requires that you crack the wing and raise each tip 3/8-inch on each side. This simple plan should produce for you a satisfying flying model of one of our country's most famous aircraft."

Hi Steve and Mary, I've included photos of my Curtiss JN-4D built from the Henry Struck plans [main pic, 003-006]. This model was inspired by the Jenny flown by aviation pioneer, Bessie Coleman [pic 007].
Eric Holmes - 27/06/2020
Beautiful model, superbly built. Kudos!
Martin - 28/06/2020
Thank you Eric. I hadn't heard of Bessie Coleman before, and your super photos prompted me to look her up (https://en.wikipedia.org/wiki/Bessie_Coleman). Wow! The first woman of African-American descent - and also the first of Native-American descent - to hold a pilot's license. And the first black person to earn an international pilot's license. Your lovely model is a fine tribute to this inspirational woman!
Mary - 28/06/2020
Add a comment