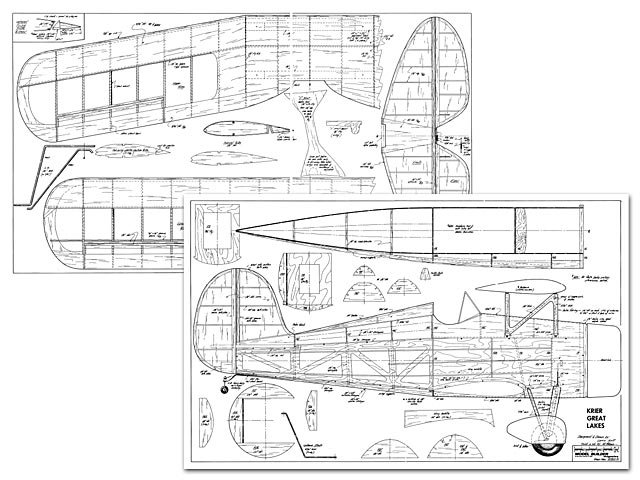 Quote: "Krier Great Lakes Special, by Larry Scott. Designer of last November's three-inch scale Waco CTO Taperwing (oz4689) comes through with another classic aircraft in the same scale - and a biplane, of course. Not only that, it's sensible Giant Scale, with an overall weight of eighteen pounds. Cowl and wheelpants in 'glass available from Larry.

If I was asked to pick my favorite airplane. I doubt if I could do it. One thing I am sure of, however, is that it would have two wings and a round engine. I also prefer a model with a lot of aerobatic potential, as this is the type of flying I like to do the best. After I read an article on Harold Krier's Great Lakes Special, I really got the urge to build a model of it. When I saw the three-views listed in Bob Holman's catalog, I ordered them immediately. I drew up some plans and built a quarter-scale model with a wing span of 80 inches and a total weight of sixteen pounds. I used a Webra .91 for power. It flew very well at this weight, and I won Giant Scale at the Sig contest (IMAC) at Montezuma, Iowa (I believe it was in 1978.)

I have since built two more models with some slight change in the plans to make them more scale. Both of these models flew very well, the first on a Suevia (1.5 cubic inch) engine and the second with a Quadra engine for power, at eighteen pounds. The model is very easy to fly and also pretty simple to build, so I won't go into too much detail on the construction of the plane.

FUSELAGE CONSTRUCTION: If you have built a Sig Kadet (oz2950) or any similar type trainer, you can build this fuselage, as it is of a very simple box-type construction. The first thing to do is cut out the sides from lite-ply, and the formers and firewall from plywood and lite-ply. Lay both sides flat over side view of plan and mark position of formers on fuse sides. Now you are ready to glue on F1 (firewall), F3, and F4. Use a small square or triangle to be sure these are vertical to the first fuse side. The next step is to lay the other side on top of the formers and glue it on. Square the formers to this side too, just to be sure everything comes out right.

Now pull the fuse sides together at the tail and epoxy together, being sure the tail end of the fuse is vertical with the fuse laying on the top side flat on the table. Cut out a sheet of lite-ply tofit top of fuse. This should reach from front of fuse to front of F4, Glue on with epoxy.

The next step is to make your landing gear and cabane struts from piano wire_ You will need a vise, two pair of vise-grips, and lots of muscle, to bend the landing gear, as the 1/4-inch music wire is very hard to bend fit can be made from 7/32 wire, if a smaller, lighter engine than a Quadra is used). The cabane struts must both be exactly the same height, as this sets the wing incidence. Glue the cabane struts on with 3/4-inch x 1/2- inch pine blocks across the top of the fuse. These should be grooved with a Dremel router or a table saw. Fit the landing gear in the pine blocks on the bottom of fuse and solder back gear ends onto bottom of front gear, then glue and clamp it into pine blocks with small straps of brass and metal screws.

The basic structure is now complete. All that is left is to add the outer formers, sheeting, and stringers. Sand the stringers down and taper them to about 1/8 inch thick at the tail.

The tail surfaces are all built from 1/8-inch balsa with half-ribs on top and bottom sides of 1/8-inch square balsa, leading edge of 1/8 inch balsa sheet, and spars on top and bottom of 1/8 inch x 1/2 inch spruce. The elevators on both sides, and rudder, have a leading edge spar of 1/8-inch x 1/2 inch balsa. I used Jet glue to glue all of this together, it's fast, light, and very strong.

Before building the wings, I would suggest cutting out all the ribs and other parts, then once you start building things will seem to go a lot faster. Two wings aren't really that much extra work..." 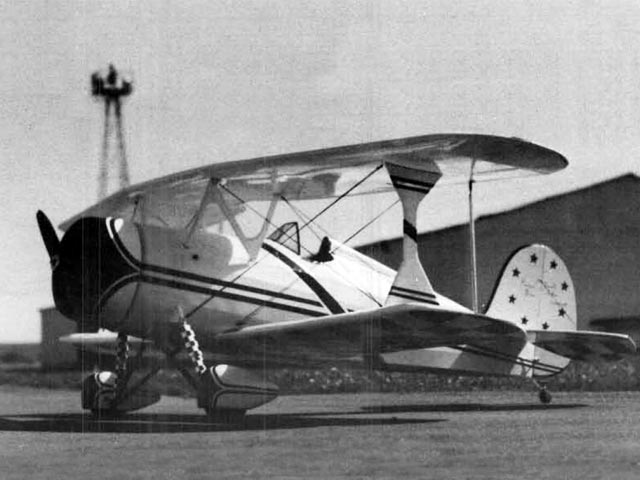