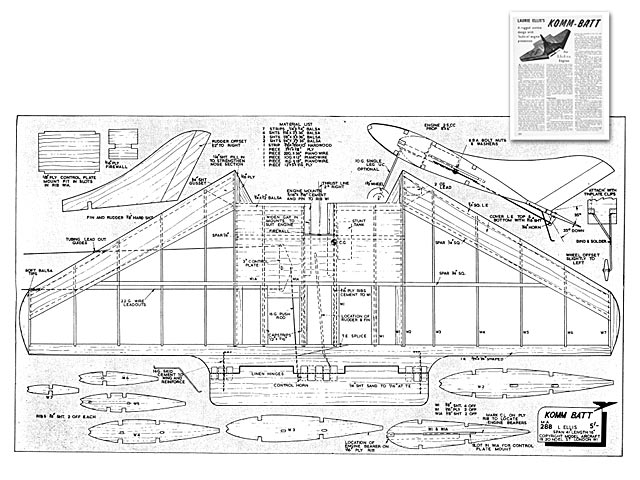 At most combat meetings it is appalling to see the chop rate on engines. Engines are certainly plentiful nowadays but they still cost money and there are those fellows who like their fun, but a smashed engine can be a near financial disaster. At one meeting, we witnessed no less than five engines reduce themselves to bits and pieces against a tarmac surface in a two-hour period.

This prompted thoughts toward a design which might spare the engine in the event of a vertical plunge into a hard surface. Thus Komm-Batt emerged from the drawing board. For initial test flights we thought of using an older, expendable, engine but the machine was designed with engine safety in mind so we threw caution to the wind and installed our favourite Oliver Tiger. To date, the model and engine have survived two sudden stops against very hard ground.

Komm-Batt is by no means a final answer to engine safety in a combat design, but it may serve as a basis for further research for those who are interested along these lines. Performance is typical of a C/L flying wing. It is ultra-sensitive on the controls and an inexperienced flyer will tend to over-control on first attempts. However, once one masters the sensitive control it will be fiound to be very easy to manage. A word of caution - one must ensure that the take-off is made clown wind to allow the model to reach full flying speed before coming into wind, otherwise it will rear up into a wing over and some pretty fast foot work is necessary to regain control and tight lines.

An optional undercarriage is shown and may be used if one has a smooth take-off area; this is the easiest way to get it airborne but hand launching is reasonably easy as long as line tension is maintained and one is quick to gain control..." 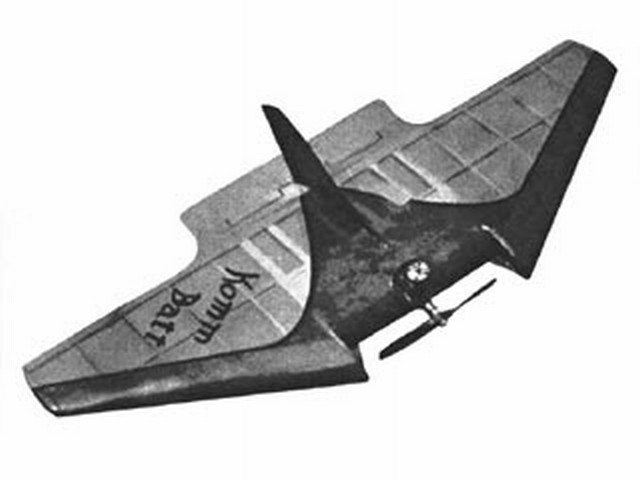