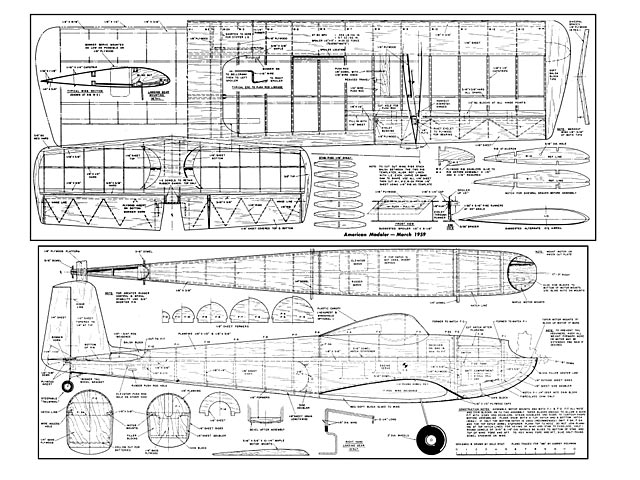 Quote: "After watching the outbreak of low wing multi ships, and further back a couple of rudder-only low wings flying around, I decided to give this trend a whirl.

Low wing R/C ships have several things in their favor. The ground handling in a high wind is phenomenal. They just seem to be riding in the 'dead air' close to the runway, and never turn over in a cross wind. Take offs have the advantage of lifting slowly from the run without the tendency to zoom that cabin jobs always seem to have. Landings are the reverse, they get close to the ground and seem to have a cushioning action and 'stick' on the runway when the wheels touch.

The first thought in a modeler's mind on low wings is, probably, the danger of loss of spiral stability. This factor of spiral stability is probably the biggest reason that low wings haven't been popular in the past. I find that this problem is one more of fear than of fact when the proper dihedral and fin area are used. I've purposely flown the Low Ender many flights on rudder only and elevator, without use of ailerons, and can say it's almost as safe as a cabin wing or shoulder wing on turns and spirals. As fin area is increased the spiral stability decreases and tends to stay in turns more. However, as can be seen in the photos the fin had been increased to study this effect and also the effect on rolls and outside loops. Even with the enlarged fin, no real dang-erous result was obtained and as I said only a greater tendency to stay in turns was noticeable.

What really was astounding, was the complete lack of the spin characteristic. This was a worry on the first flights as the small fin would have given it a chance to show up in great style for spins. The first take off the Low Ender made had everybody getting out from under it for fear it would fall down. It had too much decalage (by 1-1/2°), too little down thrust (by 3°), and was slightly tail heavy for this set up. It hung on the prop full bore and merely flew around in a power stall, steering with rudder only. In fact, as it proved out in sub-sequent flights, it was difficult to make it spin. The airfoil just didn't want to 'pay off' in loss of lift. This was the biggest surprise of the whole project - a low wing that didn't want to spin. And with 45° 'up' elevator.

Since that time this airplane has under gone almost every conceivable CG change, fin area change and decalage setting that could be given it, to study various effects on flying the full stunt pattern. The settings on the plans have been the best found. At time of writing a new wing of only 13% foil and 72 in span is being built. The prime reason is to increase speed, by a thinner foil and area. Maneuvers, to this writer, appear better when they are faster and cleaner, although not necessarily easier to fly. The ship should prove an even better flyer with the thinner foil (very similar to the 'Ascender' foil) and same dihedral, or perhaps only 7° for increased rate of roll. The new foil is on the plans for those that wish to try it. Perhaps 1/2 ° more decalage should be used. Also a K&B 35 will handle the smaller faster wing, with more ease than the thicker section.

Both the K&B R/C 35 and the Spitfire 60 have been interchanged at times for no particular reason except to try them. Both work well and fly it well. Our field runway is rather rough and up hill so the added power of 60 gets it in the air a little easier before the ship runs out of runway. The K&B 35 handles it almost as well unless power sags from a hot dry day.

Outside loops and rolls just didn't appear right on first flights. On outsides it would stall violently as though the wing had lifted from the fuselage. (They can do that on low wings, you know, on outsides.) In repeated flights, excessive added fin area, and dorsel area was tried. Fred Dunn, of Astro Hog (oz4756) design fame watched it react and helped glue balsa on the fin. None of this did any good at all. The real trouble it was found, was merely in using too much elevator travel. We had used 1 in of down when 1/2 in was all required. On rolls, only a small amount of down as it rolled over was the solution to good rolls. Eventually the CG was moved aft 3/8 in to improve the outsides. Now, none of these things are a problem.

One other difference in characteristic of the low wing was its response to a trim setting on a trimmable elevator. The elevator on the low wing, as opposed to the elevator on the shoulder wing, was a great deal more critical. This is especially noticeable in the landing set up. It has been flown both trimmable and neutral return. The neutral return setting for neutral elevator is sensitive to 1/2 turn of a Bonner Servo or about 1/16 in at the elevator trailing edge. This is perhaps due to the low decalage set-ting too. However, when adjusted properly, flying is much easier and stunting without a ballooning tendency, is very satisfying.

Low Ender responds very well to rud-der for turns. It isn't necessary to use aileron and up elevator for turns. The ship could be built and flown with-out ailerons should the builder not have the equipment to control them..." 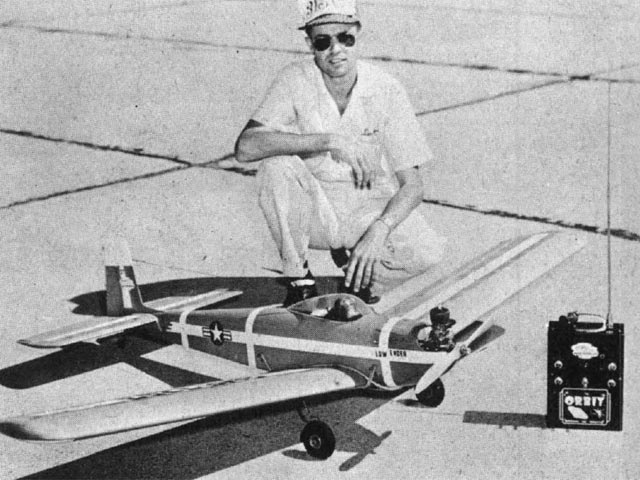