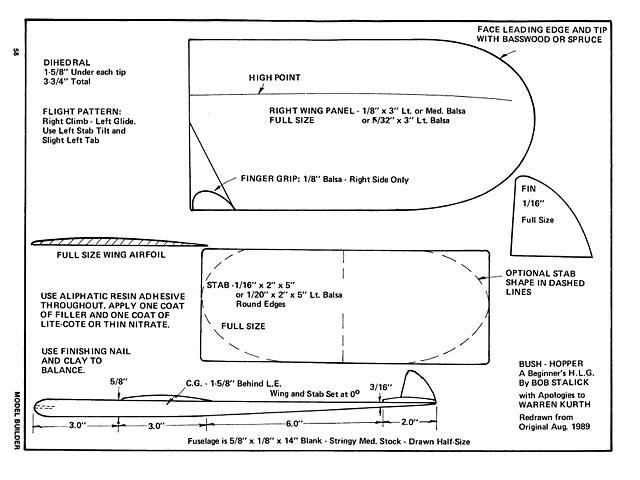 Quote: "BUSH HOPPER, A BEGINNER'S HLG. Last summer, Shirley Gode, local artist and club member, had an idea to spur the involvement of junior age fliers in our club contests. She decided to sponsor a contest for youngsters under 12 years of age to compete in hand launch glider. The catch was that the gliders were to be built by members of the Willamette Modelers Club. Any design would do, but these gliders, once built, were to be put into a box and chosen by the fliers. No fee was charged, and the awards included certificates and prizes for all contestants. With minimal publicity, fifteen youngsters came to the meet - held in conjunction with one of the club contests - and flew. The majority of gliders were Bush Hoppers. Al Grell built seven of them himself.

The Bush Hopper was originally designed when my own children were just getting started in free flight (close to twenty years ago) and wanted to learn to fly. The Bush Hopper was a shrunken version of the Hedge Hopper HLG design by Warren Kurth. The original was light and simple to build and you could learn to fly easily with it. So, it seemed appropriate to build a smaller one that could be flown by young-sters who had not flown before.

The model is very straightforward to build, and the plans are self-explanatory. It should be built with left glide turn via left stab tilt and a bit of left rudder tab. Balance as shown, and your local young beginners should have a blast with it. The wing is just a bit on the thin side with only 1/8-inch sheet, and if you can find some lightweight 5/32, it would be even better wing stock. Build it ruggedly, as some of the kids have strong, though uncontrolled arms.

You should have a really good time building these ships, and the kids will have a great time flying them."