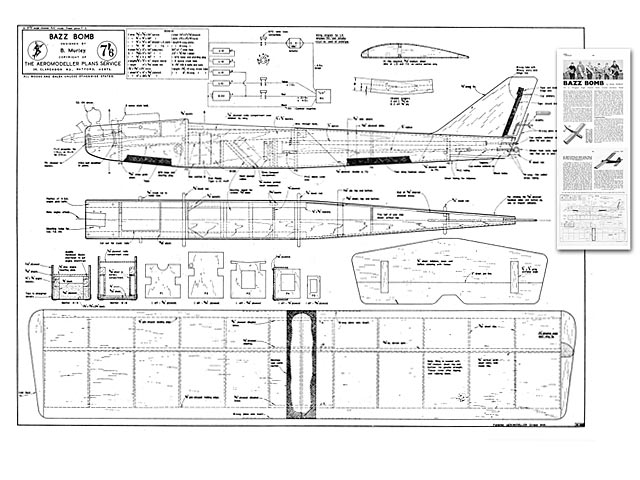 ABOUT TWO YEARS ago the author decided that some serious reconsideration was required concerning the type of rudder-only R/C aircraft that was needed to eliminate those frustrating delays on the ground through damage or unsuitable weather. The result was Bazz Bomb, A highly manoeuvrable design was required to facilitate landing approaches and also for the sheer fun of being able to throw it around the sky.

On the basis that the undecarriage was merely a tripping-tip device, introducing extra weight and drag - it was eliminated from the project, a move that has not been regretted. Bazz Bomb will make a good landing on any soft surface from mown grass to a ploughed field without overturning or damaging the under-surface. Designed to have maximum longevity and crash resistance (the author does not like building aeroplanes!) - weight became a secondary consideration.

As the designer is a radio enthusiast first, and aeromodeller second, great attention was paid to the 'innards' - nothing less than 100 percent reliability was the aim, and so far this has been achieved as no failures have been experienced in over 3,000 flights spread over two years. Of many receivers of all types made and tested one was really outstanding - this was the UK (RCME June, 1961) adapted to relayless, it scored on all points: range, reliability, selectivity, freedom from inter-ference and swamping. Only drawback for some modellers may be the slightly more complex battery supply, but as large capacity batteries have been used, they were wired in and virtually forgotten for months.

It was felt that Buzz Bomb could not be flown with a compound escapement as they are usually a trifle slow in operation and in any case it will be found that after a turn, opposite rudder is required to straighten the model. With a sequential escapement it is there waiting for you - no thinking required about which is left or right! Therefore, the actuator used was the Elmic Conquest. This was given a thorough inspection to ensure that everything was functioning before and after installation, also that it would pull in when the rubber was fully wound when using only a 3 volt battery supply..."

Artciel pages, text and pics. Thanks to AllanWarner for adding the missing last page for this. 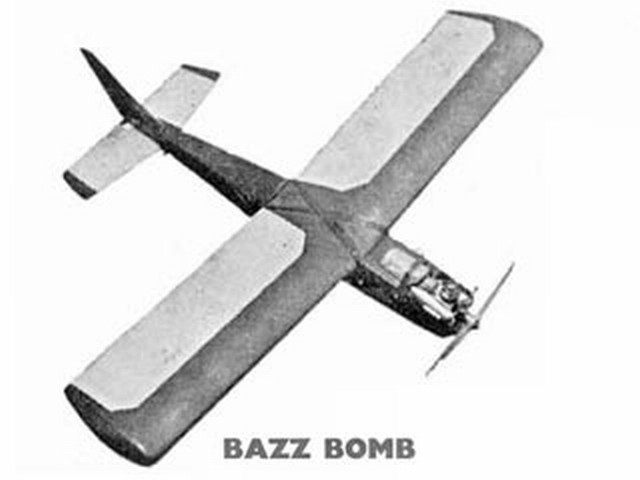