Quote: "THE SIMPLE CHUCK GLIDER gives more satisfaction for the amount of effort involved in construction than any other type of aeromodelling we know; but it is never the simplest of the chuck gliders which gives the best performance. This model by Michael Turner was created for indoor work but has an equal application for out-door flying when the wind is not too strong.

The model is the fourth of a series and is chosen because it is slightly smaller, and very much easier to handle than others. In a contest in September 1960, it beat all opposition, including Hugh O'Donnell with a best time of 58 seconds. Flights were consistently 55 seconds and above, a performance which surprised the designer! With practice and training he hoped to beat the minute barrier but this has been rather like the four minute mile.

Since 1960 the model was flown twice more at Cardington, managing best times of up to 57 seconds. In the summer of 1963 it came out of storage and was used to interest and teach future aeromodellers. On one sunny afternoon's demon-stration flight, the model disappeared OOS after about 18 minutes, much to the amazement of the onlookers.

Bomark is stable, soit can be flown outdoors with little or no trim change. Similar models have had very good handling characteristics and delighted the beginners who made them.

In summer 1962 a model with larger wingspan and elliptical wing planform was constructed, this wa flown at Cardington, giving two fligts of 59 seconds, and one of 61.5 seconds. The model was damaged on a girder so the record was not officially broken.

Selection of materials. Time should be spent on choosing wood, since this makes all the difference to performance and strength of the model. A very soft 1/4 in sheet should be sleected for the wing, 4 in wide and quarter grain if possible..." 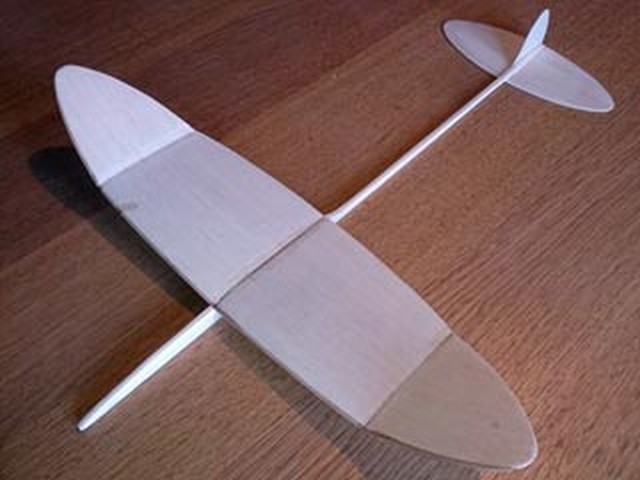 Hello, Love your website. Just build the Bomark chuckglider and thought you might like a picture for your archive. Cheers!
Jorn - 29/01/2014
I made this thing some time ago [more pics 003]. It flies crazy well! Extra easy to trim too. I think it was mostly because of the wing balsa though. Unusually good for hobby shop balsa.
Henry F. - 29/12/2019
Add a comment